Paul Tough Speaks at Harvard: How Children Succeed - Child In Mind. He describes helping Ellington to calm down after a tantrum or bad scare, providing discipline and rules, and, in addition to lots of hugs and comfort, helping him learn to manage failure. 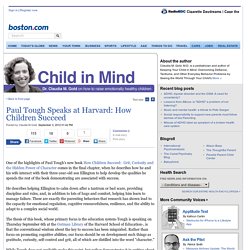 These are exactly the parenting behaviors that research has shown lead to the capacity for emotional regulation, cognitive resourcefulness, resilience, and the ability to adapt to a complex social world. The thesis of this book, whose primary focus is the education system-Tough is speaking on Thursday September 6th at the Gutman Library of the Harvard School of Education-, is that the conventional wisdom about the key to success has been misguided. Reading, Math and Grit. Child's character matters in education - tribunedigital-chicagotribune.

September 10, 2012|Dawn Turner Trice Jeff Nelson is the CEO and co-founder of OneGoal. 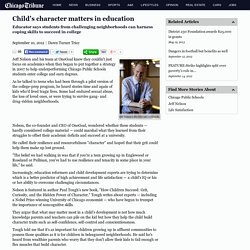 (Abel Uribe, Chicago Tribune) Jeff Nelson and his team at OneGoal knew they couldn't just focus on academics when they began to put together a strategy in 2007 to help underperforming Chicago Public Schools students enter college and earn degrees. As he talked to teens who had been through a pilot version of the college-prep program, he heard stories time and again of kids who'd lived tragic lives. Welcome to Forbes. ‘How Children Succeed’ — Q&A with Paul Tough - The Washington Post. Here is a conversation I had by email with Paul Tough about his new book, “How Children Succeed: Grit, Curiosity, and the Hidden Power of Character.” 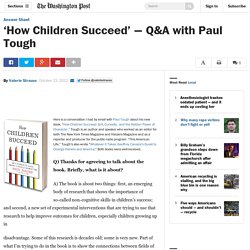 Tough is an author and speaker who worked as an editor for both The New York Times Magazine and Harpers Magazine and as a reporter and producer for the public-radio program “This American Life.” Tough’s also wrote “Whatever It Takes: Geoffrey Canada’s Quest to Change Harlem and America.” Both books were well-received. Q) Thanks for agreeing to talk about the book. Briefly, what is it about? The Promise of Positive Education. A 2011 University of Pennsylvania study followed 300 students through a year of middle school, measuring their good and bad feelings (depression, positive emotion, life satisfaction) and how teachers rated their classroom behavior. 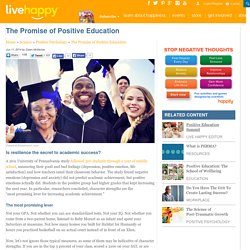 The study found negative emotions (depression and anxiety) did not predict academic achievement, but positive emotions actually did. Students in the positive group had higher grades that kept increasing the next year. In particular, researchers concluded, character strengths are the “most promising lever for increasing academic achievement.” The most promising lever Not your GPA. Now, let’s not ignore those typical measures, as some of them may be indicative of character strengths. Grit is just one of many character strengths positive psychology researchers are focused on these days, but it seems to be the one gaining the most headlines. Angela’s mentor is Martin E.P. Grit research Austin ISD. Experts say building skills like grit and perseverance will help increase college readiness in the U.S.

Plenty of U.S. students are getting into college, but only 55 percent of them are getting out with diplomas, according to the National Center for Education Statistics. 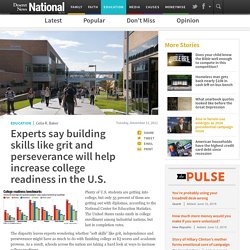 The United States ranks ninth in college enrollment among industrial nations, but last in completion rates. The disparity leaves experts wondering whether "soft skills" like grit, independence and perseverance might have as much to do with finishing college as IQ scores and academic prowess. Short Grit Scale Survey. McDonald's Backing Soft Skills. ODEP - Office of Disability Employment Policy - Youth in Transition - Soft Skills: The Competitive Edge. Overview "Skills to Pay the Bills: Mastering Soft Skills for Workplace Success," is a curriculum developed by ODEP focused on teaching "soft" or workforce readiness skills to youth, including youth with disabilities. 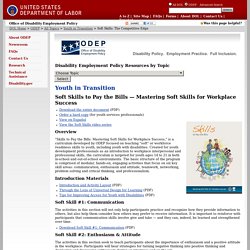 Created for youth development professionals as an introduction to workplace interpersonal and professional skills, the curriculum is targeted for youth ages 14 to 21 in both in-school and out-of-school environments. The basic structure of the program is comprised of modular, hands-on, engaging activities that focus on six key skill areas: communication, enthusiasm and attitude, teamwork, networking, problem solving and critical thinking, and professionalism. Introduction Materials Soft Skill #1: Communication The activities in this section will not only help participants practice and recognize how they provide information to others, but also help them consider how others may prefer to receive information.

5 Must-Have Skills Graduates Need to Land Their First Job. Today’s college graduates need every skill-related edge they can get when it comes to applying for and landing a full-time job. 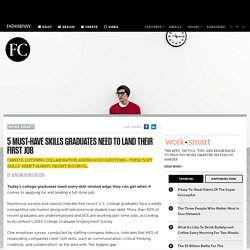 Numerous surveys and reports indicate that recent U.S. college graduates face a wildly competitive job market along with astronomical student loan debt. More than 40% of recent graduates are underemployed and 16% are working part-time jobs, according to Accenture’s 2013 College Graduate Employment Survey. One employer survey, conducted by staffing company Adecco, indicates that 44% of responding companies cited "soft skills, such as communication, critical thinking, creativity, and collaboration" as the area with "the biggest gap.

" Additionally, a Talent Shortage Survey from ManpowerGroup discovered that nearly one in five employers worldwide is unable to fill positions because they can’t find people with soft skills. 1. Most new graduates apply for entry-level positions, perhaps following an internship at a specific organization. 2. 3. Consider a sports team. 4. The 10 Unique Soft Skills Employers Desire in New Hires. In a survey this spring 77 percent of employers surveyed by CareerBuilder said they were seeking candidates with soft skills -- and 16 percent of the respondents considered such qualities more crucial than hard skills. 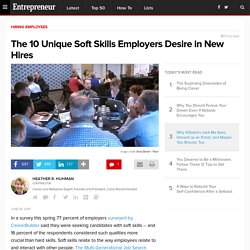 Soft skills relate to the way employees relate to and interact with other people. The Multi-Generational Job Search Study 2014 by Millennial Branding said employers ranked the following as the most highly desired qualities in candidates: communication skills, a positive attitude and the ability to work in a team, all of which can be labeled soft skills or emotional intelligence. Overwhelming Majority of Companies Say Soft Skills Are Just as Important as Hard Skills, According to a New CareerBuilder Survey - CareerBuilder. CHICAGO – April 10, 2014 – Don’t skimp on soft skills when writing your resume. 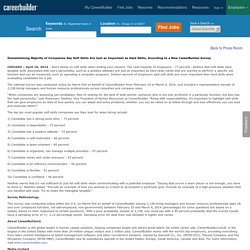 The vast majority of employers - 77 percent - believe that soft skills (less tangible skills associated with one’s personality, such as a positive attitude) are just as important as hard skills (skills that are learned to perform a specific job function and can be measured, such as operating a computer program). Sixteen percent of employers said soft skills are more important than hard skills when evaluating candidates for a job.

The national survey was conducted online by Harris Poll on behalf of CareerBuilder from February 10 to March 4, 2014, and included a representative sample of 2,138 hiring managers and human resource professionals across industries and company sizes. The top ten most popular soft skills companies say they look for when hiring include: 1) Candidate has a strong work ethic – 73 percent 2) Candidate is dependable – 73 percent 3) Candidate has a positive attitude – 72 percent Media Contact. The KIPP Report Card - The Key(s) To Success.