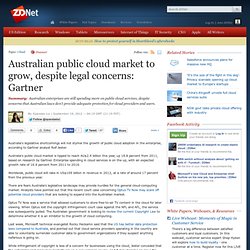 Australia's public cloud market is tipped to reach AU$2.4 billion this year, up 18.8 percent from 2011, based on research by Gartner. Enterprise spending in cloud services is on the up, with an expected growth rate of 16.9 percent from 2011 to 2016. Worldwide, public cloud will rake in US$109 billion in revenue in 2012, at a rate of around 17 percent from the previous year. There are fears Australia's legislative landscape may provide hurdles for the general cloud-computing market. Analysts have pointed out that the recent court case concerning Optus TV Now may scare off potential cloud providers that are looking to expand into the Australian market. DNSChanger Infections (2012-01-01 to 2012-03-31) What Is Wrong With the Trans-Pacific Partnership (TPP) EFF has been fighting against the Trans-Pacific Partnership (TPP) intellectual property chapter for several years. 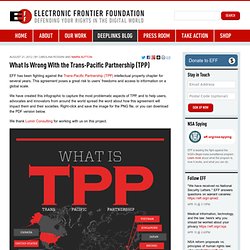 This agreement poses a great risk to users’ freedoms and access to information on a global scale. We have created this infographic to capture the most problematic aspects of TPP, and to help users, advocates and innovators from around the world spread the word about how this agreement will impact them and their societies. Right-click and save the image for the PNG file, or you can download the PDF version below. Internet Archive: Wayback Machine. IT offers. Pre-Paid Mobile Broadband Rates - Internet.

Telstra Business - ADSL Broadband Plans & Pricing. ANCCEH Telehealth Paper - Health Informatics Society of Australia. Current and future state of mhealth. Our analysis of mHealth reveals mobile is positioned to have a huge impact on how healthcare is delivered. 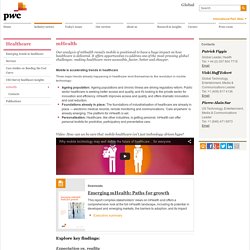 It offers opportunities to address one of the most pressing global challenges: making healthcare more accessible, faster, better and cheaper. Mobile is accelerating trends in healthcare Three major trends already happening in healthcare lend themselves to the revolution in mobile technology: Ageing population: Ageing populations and chronic illness are driving regulatory reform.

IPTV: Strategies for success. Geoff Huston - potaroo.net. History of the Internet. World Sunlight Map. Watch the sun rise and set all over the world on this real-time, computer-generated illustration of the earth's patterns of sunlight and darkness. 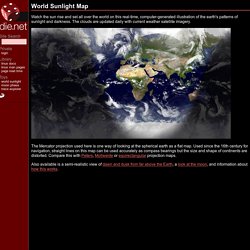 The clouds are updated daily with current weather satellite imagery. The Mercator projection used here is one way of looking at the spherical earth as a flat map. NBN Co opens app testing sandpit - Telco/ISP. The Internet of Things. Are you past oriented or future oriented. Internet2. Center: About Jon Postel. Jon Postel, Internet Pioneer August 6, 1943 - October 16, 1998. Tim Berners-Lee. In 1989, Tim Berners-Lee invented the World Wide Web, an Internet-based hypermedia initiative for global information sharing while at CERN, the European Particle Physics Laboratory.

He wrote the first web client and server in 1990. His specifications of URIs, HTTP and HTML were refined as web technology spread. He is Director of the World Wide Web Consortium (W3C), a Web standards organization founded in 1994 that develops interoperable technologies (specifications, guidelines, software, and tools) to lead the Web to its full potential. He is a founding Director of the Web Science Trust (WST) launched in 2009 to promote research and education in Web Science, the multidisciplinary study of humanity connected by technology. Berners-Lee is also a Director of the World Wide Web Foundation, launched in 2009 to coordinate efforts to further the potential of the Web to benefit humanity. 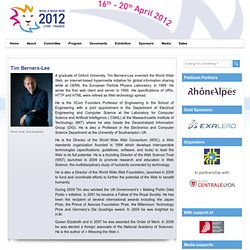 He wrote the first web client and server in 1990. His specifications of URIs, HTTP and HTML were refined as Web technology spread. He is the 3Com Founders Professor of Engineering in the School of Engineering with a joint appointment in the Department of Electrical Engineering and Computer Science at the Laboratory for Computer Science and Artificial Intelligence ( CSAIL) at the Massachusetts Institute of Technology (MIT) where he also heads the Decentralized Information Group (DIG). A Brief History of the Internet. Barry M. Leiner, Vinton G. Cerf, David D. Clark, Robert E. Welcome to SC12. 8th IEEE International Conference on eScience 2012 - Chicago, USA. Thank you! Thanks to all eScience attendees and contributors, and we look forward to seeing you again in Beijing for eScience 2013 eScience 2012 The 8th IEEE International Conference on eScience (eScience 2012) will be held at the Hyatt Regency Chicago, Chicago, Illinois, 8-12 October 2012, with workshops (including the Microsoft eScience Workshop) on 8-9 October and the main conference events on 10-12 October. 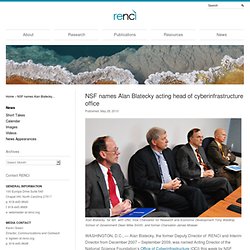 WASHINGTON, D.C., — Alan Blatecky, the former Deputy Director of RENCI and Interim Director from December 2007 – September 2009, was named Acting Director of the National Science Foundation’s Office of Cyberinfrastructure (OCI) this week by NSF Director Arden Bement. Blatecky will lead the OCI while a national search for a permanent OCI head is conducted. Jon Postel. Geeks Debate Consumerization of IT at Citrix Synergy. The GeekSpeak panel debate on the consumerization of IT at Citrix Synergy provided some valuable insights to what IT pros are facing with today’s proliferation of personal devices and services. 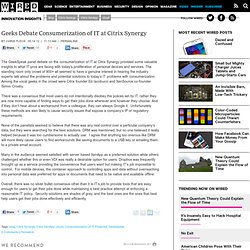 The standing room only crowd of 900+ all seemed to have a genuine interest in hearing the industry experts talk about the problems and potential solutions to today’s IT problems with consumerization. Among the vocal geeks in the crowd were Citrix founder Ed Iacobucci and XenSource co-founder Simon Crosby. There was a consensus that most users do not intentionally disobey the polices set by IT, rather they are now more capable of finding ways to get their jobs done wherever and however they choose. And if they don’t hear about a workaround from a colleague, they can always Google it.

Unfortunately these methods are also likely to cause security issues that expose a company’s IP or regulatory requirements. VeRSI: engaging, collaborating, developing ... bringing eResearch to researchers. Event Date and Time: Sun, 14/10/2012 - 12:00am - Wed, 17/10/2012 - 12:00am Many emerging services, such as tele-work, e-government and business solutions, are using cloud computing in various forms to their advantage. Some businesses are providing services by outsourcing parts of their business processes, which are now hosted as cloud-based software services.

Others are adopting cloud-based IT infrastructure to be able to host their outsourced services. This trend will be both economically and technically feasible only when the application services outsourced from various enterprises work seamlessly when deployed across multiple cloud platforms. CollabCloud 2012 brings together researchers and practitioners from around the world to share their experiences on using 'single cloud' versus 'multiple clouds' and discuss the benefits of collaboration across clouds.