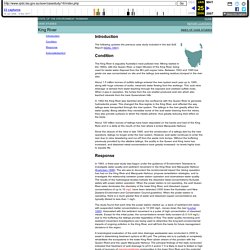 Condition The King River is arguably Australia’s most polluted river. Mining started in the 1880s, with the Queen River, a major tributary of the King River, being used for waste water disposal from the Mt Lyell copper mine. Between 1922 and 1995 low grade ore was concentrated on site and the tailings (ore-washing residue) dumped in the river also. About 1.5 million tonnes of sulfidic tailings entered the river system each year up to 1995, along with huge volumes of acidic, metal-rich water flowing from the workings. Naples Life,Death & Miracle (Sarno River) Biblical Waters: Can the Jordan River Be Saved? If Jesus were to plunge into the Jordan River today, he might well injure himself. 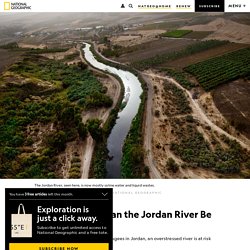 Charting The Course Of A Rivers Future (Ohio River) The Ohio River is born in Pittsburgh, where the Appalachian mountain waters of the Allegheny and Monongahela Rivers merge. 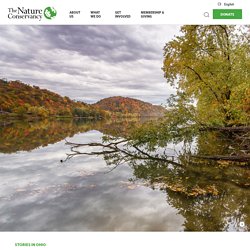 Nearly a thousand miles later, the Ohio meets up with the Mississippi, at the aptly named Cairo (think Nile), Illinois. Along the way, as it snakes through the heart of the country, the Ohio River picks up tributary waters from 14 states, where topography ushers highland waters down a diverse gradient of forest, grassland, farmland and development. Why It Matters The Ohio River has always been a work horse for people—providing us with food and water, guiding exploration and settlement, powering early industrial development, and serving as a destination for outdoor recreation. In spite of the demands put on it, the system supports abundant wildlife as well. Threats Anyone who loves rivers knows they are not static systems.

But the Upper Ohio and its tributaries no longer flow naturally. But dams also disrupt the natural ebb and flow of a river. What We’re Doing. Ohio River Foundation. The River and Its Watershed The Ohio River is 981 miles long, starting at the confluence of the Allegheny and the Monongahela Rivers in Pittsburgh, Pennsylvania, and ending in Cairo, Illinois, where it flows into the Mississippi River. 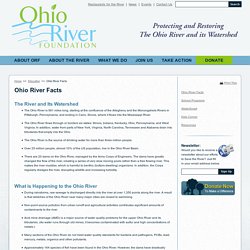 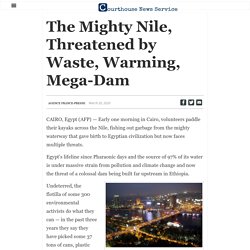 Egypt’s lifeline since Pharaonic days and the source of 97% of its water is under massive strain from pollution and climate change and now the threat of a colossal dam being built far upstream in Ethiopia. Undeterred, the flotilla of some 300 environmental activists do what they can — in the past three years they say they have picked some 37 tons of cans, plastic bottles, disposable bags and other trash from the waters and shores along the Nile in Egypt. “People have to understand that the Nile is as important — if not more — than the pyramids,” said Mostafa Habib, 29, co-founder of the environmental group Very Nile. “The generations coming after us will depend on it.” Why is the Murray-Darling Basin so important and how did we end up at this point? Amid the deaths of millions of fish and a scathing royal commission report, a war of words has erupted around the Murray–Darling Basin. 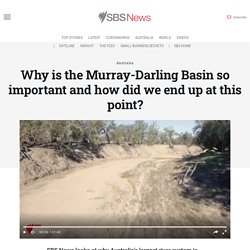 How did we get here? River Murray. The Great Pacific Garbage Patch. Understanding Toxicity It is commonly known that harmful PBT (Persistent Bio-accumulative Toxic) chemicals are found in ocean plastics, so researchers at The Ocean Cleanup tested plastic samples from the expeditions for their chemical levels. 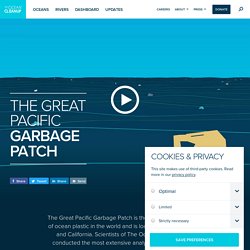 Their results helped them to realize what chemicals are present in the patch and what that means for animals feeding there. Plastics ranging from various type and size were analyzed by placing them in mixtures that would allow the various chemicals to be identified. A process known as Chromatography. They found through various tests that 84% of the plastics in the GPGP contain at least one type of PBT chemical. Ocean Plastic Data Science. How can we destroy the Great Pacific Garbage Patch? – WWF-Australia. Rome, the Eiffel Tower, Sydney Opera House: Humanity is capable of producing beautiful and awe-inspiring creations. 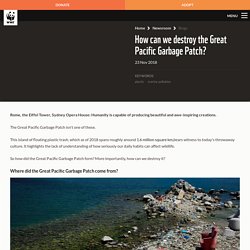 The Great Pacific Garbage Patch isn't one of these. This island of floating plastic trash, which as of 2018 spans roughly around 1.6 million square km,bears witness to today's throwaway culture. It highlights the lack of understanding of how seriously our daily habits can affect wildlife. National Geographic Society. The Great Pacific Garbage Patch is a collection of marine debris in the North Pacific Ocean.

Marine debris is litter that ends up in oceans, seas, and other large bodies of water. The Great Pacific Garbage Patch, also known as the Pacific trash vortex, spans waters from the West Coast of North America to Japan. The patch is actually comprised of the Western Garbage Patch, located near Japan, and the Eastern Garbage Patch, located between the U.S. states of Hawaii and California. These areas of spinning debris are linked together by the North Pacific Subtropical Convergence Zone, located a few hundred kilometers north of Hawaii. Conservation Of The Great Barrier Reef Australia - WWF - WWF-Australia. Coral bleaching Coral bleaching is the result of global warming caused by the mining and burning of fossil fuels like coal. 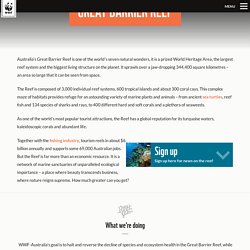 Global warming is heating our oceans, and if the water stays too hot for too long, corals bleach and die. Farm pollution Farm pollution is one of the key drivers of the Reef’s decline. It smothers corals and seagrass beds and denies them sunlight, drives crown of thorn starfish and makes coral more vulnerable to bleaching. Nitrogen run-off from farms can also lead to algal blooms, which starfish larvae feed on, promoting population explosions.

Threat to the Reef - Great Barrier Reef Foundation - Great Barrier Reef Foundation. Pollution and Other Factors - Biodiscovery and the Great Barrier Reef - Queensland Museum. 5(e) Pollution and Other Factors Other Factors Causing Coral Bleaching: There are other factors, apart from heat stress, that cause coral bleaching. These may include: increased exposure to UV radiation increased storm water run-off after heavy rains certain chemicals or diseases increased sediments such as sand and mud covering the coral excess nutrients from ammonia and nitrate-based fertilisers and other household products, entering the reef ecosystem. Nutrient Enrichment: Nutrient enrichment on the GBR is associated with: coastal development and runoff leading to poor water quality fertiliser run-off from farming and agricultural practices storms which cause re-suspension of nutrients.

This increase in nutrients in aquatic ecosystems that results in increased algal growth is called eutrophication. Other Risks to the Reef: Further risks to coral reefs from human activities include: Butterfly Fish. Next section: 5(f) Protect Our Reef. Ganges River Pollution. Search this site So with such a massive influence on the local and national population, why is it that the river is so completely and utterly disgusting? Well this is a question that is asked everyday and to help answer it we first need to take a look at a few facts which mean that the environmental issue in India are some of the worst in the world.

When you've finished you may want to have a look at air pollution in India This page contains some graphic images. Yangtze River pollution at dangerous levels. By Emma Young The Yangtze River is becoming increasingly polluted, according to an official Chinese government report. The findings raise fresh concerns about the potential health risks of the controversial Three Gorges Dam, which is set to start holding back water in 2003. Sewage and industrial waste dumping totalled 23.4 billion tonnes in 2001, up 11 per cent on the figure for 2000, says Chinese news agency Xinhua. Threat of Pollution in the Yangtze. Rivaling the impact of the Three Gorges Dam, this basin faces unprecedented pollution as a result of rapid, large-scale industrial and domestic development, and agricultural runoff. According to Chinese environmental activist Dai Qing, the Yangtze used to be so clear that you could see a pen sink to the bottom.

Now it has become so dirty that it is not fit for drinking. Pollution in the Mediterranean Sea. Environmental issues. Known as the cradle of civilization, the Mediterranean region has been subject to human intervention for millennia, so that little remains of indigenous ecosystems. Yet the region is still an important biological resource. What Are the 16 Most Polluted Rivers in the World? The toxic waste that enters Indonesia’s Citarum River, one of the world's most polluted.

MAJALAYA, Indonesia: It’s been called the world’s most polluted river by the World Bank. Murky, dense and dirty-brown – the water that runs through Citarum River in Indonesia’s West Java is toxic. Yet, the river supports around 28 million people who rely on it for daily activities such as cooking, bathing and laundry.