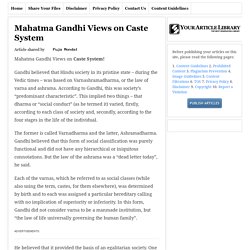 Gandhi believed that Hindu society in its pristine state – during the Vedic times – was based on Varnashramadharma, or the law of varna and ashrama. According to Gandhi, this was society’s “predominant characteristic”. This implied two things – that dharma or “social conduct” (as he termed it) varied, firstly, according to each class of society and, secondly, according to the four stages in the life of the individual. The former is called Varnadharma and the latter, Ashramadharma. Gandhi believed that this form of social classification was purely functional and did not have any hierarchical or iniquitous connotations. Each of the varnas, which he referred to as social classes (while also using the term, castes, for them elsewhere), was determined by birth and to each was assigned a particular hered­itary calling with no implication of superiority or inferiority. He believed that it provided the basis of an egalitarian society. 1. 2. 3. World Religions. How did Hinduism begin? 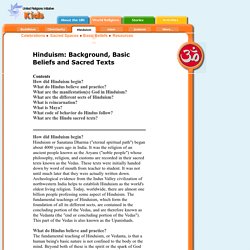 Hinduism or Sanatana Dharma ("eternal spiritual path") began about 4000 years ago in India. It was the religion of an ancient people known as the Aryans ("noble people") whose philosophy, religion, and customs are recorded in their sacred texts known as the Vedas. These texts were initially handed down by word of mouth from teacher to student.

It was not until much later that they were actually written down. Archeological evidence from the Indus Valley civilization of northwestern India helps to establish Hinduism as the world's oldest living religion. What do Hindus believe and practice? What are the manifestation(s) God in Hinduism? What is reincarnation? What is Maya? Schools - Religion - Hinduism. Hindu Gods and Goddesses, Deities, India, Dev, Devi, list. Hindu Gods and Goddesses There are three main deities or demi-Gods in Hinduism namely, Brahma, Vishnu, and Shiva and one main Goddess, Mata Parvati. 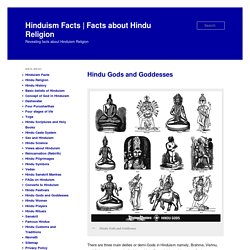 Most of the other Gods are incarnations or other forms of Vishnu and Shiva and Goddesses are also incarnation or other forms of Devi Parvati. Besides that there are a number of other demi-Gods and local deities, which are popular in particular areas only. These demigods and deities are known as Devas and Devis. It is very difficult to cover all of them but we are trying to cover as many names as possible. Hindu God: Brahman (not to be confused with Brahmin caste) is considered as the God of Hindus. 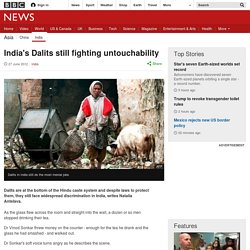 As the glass flew across the room and straight into the wall, a dozen or so men stopped drinking their tea. Dr Vinod Sonkar threw money on the counter - enough for the tea he drank and the glass he had smashed - and walked out. Dr Sonkar's soft voice turns angry as he describes the scene. For years, he says, he worked hard to leave behind his childhood of poverty, abuse at school and teasing at university. By the time he had walked into the Rajasthan teashop, he had turned his life into a success story.

He had a PhD in law and a teaching position at a Delhi university. Yet, as the shop owner handed him his tea, he asked him what caste he belonged to. "I am a Dalit," Dr Sonkar said. "In that case, wash your glass when you are done," the shop owner said. "He didn't want to touch whatever I had touched. 'Slowly changing' Caste System: Essay on Positive and Negative Effects of Caste System - Important India. The caste system has exercised a profound influence on the economic activities of the people of India. 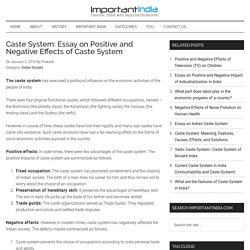 There were four original functional castes, which followed different occupations, namely – the Brahmins (the priestly class), the Kshatriyas (the fighting caste), the Vaisyas (the trading class) and the Sudras (the serfs). However, in course of time, these castes have lost their rigidity and many sub-castes have come into existence. What is India's caste system? India has in recent weeks seen some of its most concerted protests because of caste. 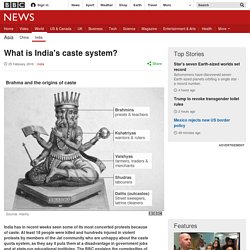 At least 18 people were killed and hundreds injured in violent protests by members of the Jat community who are unhappy about the caste quota system, as they say it puts them at a disadvantage in government jobs and at state-run educational institutes. The BBC explains the complexities of India's caste system. India's caste system is among the world's oldest forms of surviving social stratification. The system which divides Hindus into rigid hierarchical groups based on their karma (work) and dharma (the Hindi word for religion, but here it means duty) is generally accepted to be more than 3,000 years old.