Develop a passion for learning, if you do, you will never cease to grow.

Technology Song for Kids - The Polkadots. Can Tweeting Help Your Teaching? So, what are you doing? 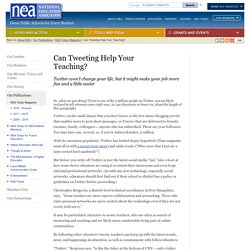 If you’re one of the 3 million people on Twitter, you are likely inclined to tell whoever cares right now, in 140 characters or fewer (or, about the length of this paragraph). Twitter, on the small chance that you don’t know, is the free micro-blogging service that enables users to post short messages, or Tweets, that are delivered to friends, enemies, family, colleagues -- anyone who has subscribed. These are your followers. You may have one, several, or, if you’re Ashton Kutcher, 2 million. With its enormous popularity, Twitter has invited dopey hyperbole (Time magazine went all in with a recent cover story) and snide cracks (“Who cares that I just ate a tasty corned beef sandwich?”) But before you write off Twitter as just the latest social media “fad,” take a look at how some clever educators are using it to enrich their classrooms and even forge informal professional networks.

But what about the much-ballyhooed decline of the American attention span? The 5 Best Free Cartoon Making Tools For Teachers - eLearning Industry. Editor's note: We have originally written and published this article in January 2014. 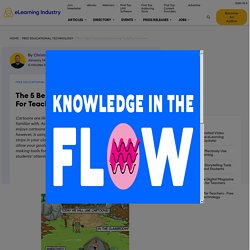 Thanks to your useful suggestions and our own following of the latest developments in the fast paced field of technology, we have updated this piece in November 2015 in the hope that you will keep finding it useful. Thank you for sharing! ChoggerAbout Chogger: Chogger is a simple, but fun comic creation tool. It allows users to import their own pictures and publish a comic anonymously or under a username.How To Use Chogger: Click the link above and visit Chogger’s site. Once there, click the green “Build a Comic Now” button to the top left of the screen. Free Educational Technology Using cartoons in the classroom can be a great way to get students’ attention or allow them to express their creative side. Get 2 Free eBooks Get the eLearning Industry's Articles in your inbox. Angela Lerma (@mslerma1) A Teacher's Guide to Twitter in 2015. A Teacher’s Guide to Twitter – 2015 Edition Why Should Teachers Use Twitter? 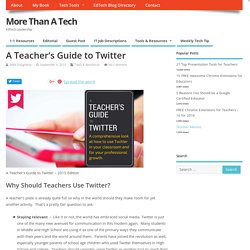 A teacher’s plate is already quite full so why in the world should they make room for yet another activity. That’s a pretty fair question to ask. Staying relevant – Like it or not, the world has embraced social media. Twitter is just one of the many new avenues for communication in this modern again. How do I create an account? Instead of recreating a tutorial that has been done countless times before, its easier to just link to a YouTube video. A couple of things to note when creating an account: Choosing a Username: Often referred to as your Twitter handle, this is the name that your tweets will come from. What do all these Twitter terms mean? Twitter can be quite confusing at first. Hashtag – Hashtags have found there way into mainstream society in a variety of formats (social media, traditional media, license plates, etc).