Slavery - BrainPOP. Resistance to Slavery: The Abolition of Slavery Project. Until recently the history of the Transatlantic Slave Trade has largely ignored the role of the African people who resisted enslavement and fought to end slavery in various ways. 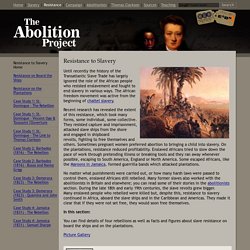 The African freedom movement was active from the beginning of chattel slavery. Recent research has revealed the extent of this resistance, which took many forms, some individual, some collective. They resisted capture and imprisonment, attacked slave ships from the shore and engaged in shipboard revolts, fighting to free themselves and others. Sometimes pregnant women preferred abortion to bringing a child into slavery. On the plantations, resistance reduced profitability. No matter what punishments were carried out, or how many harsh laws were passed to control them, enslaved Africans still rebelled.

In this section: You can find details of four rebellions as well as facts and figures about slave resistance on board the ships and on the plantations. Picture Gallery. Abolitionist Movement - Black History. From the 1830s until 1870, the abolitionist movement attempted to achieve immediate emancipation of all slaves and the ending of racial segregation and discrimination. 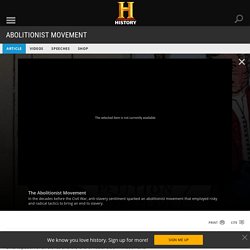 Their propounding of these goals distinguished abolitionists from the broad-based political opposition to slavery’s westward expansion that took form in the North after 1840 and raised issues leading to the Civil War. Yet these two expressions of hostility to slavery–abolitionism and Free-Soilism–were often closely related not only in their beliefs and their interaction but also in the minds of southern slaveholders who finally came to regard the North as united against them in favor of black emancipation. Arguments and Justifications: The Abolition of Slavery Project. What were the arguments of the pro-slavery lobby? 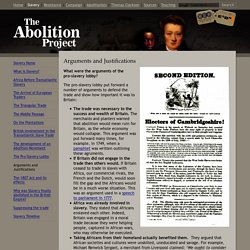 The pro-slavery lobby put forward a number of arguments to defend the trade and show how important it was to Britain: The trade was necessary to the success and wealth of Britain. The merchants and planters warned that abolition would mean ruin for Britain, as the whole economy would collapse. This argument was put forward many times, for example, in 1749, when a pamphlet was written outlining these agruments.If Britain did not engage in the trade then others would. Underground Railroad - BrainPOP. Harriet Tubman - Mini Bio. The Campaign to Abolish Slavery: The Abolition of Slavery Project. Today, we only have to turn on our TVs or surf the internet to get up-to-date news. 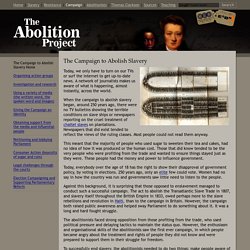 Abraham Lincoln - BrainPOP. The Abolitionists: The Abolition of Slavery Project. What did a Quaker teacher, a Methodist preacher, a former slave, a former slaver, a ship's doctor, a businessman, an African composer, a Baron, a scholar, an outspoken widow, a lawyer and a wealthy politician have in common? 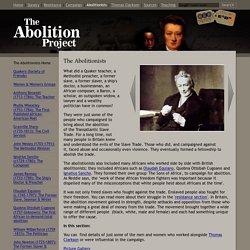 They were just some of the people who campaigned to bring about the abolition of the Transatlantic Slave Trade. For a long time, not many people in Britain knew and understood the evils of the Slave Trade. Those who did, and campaigned against it, faced abuse and occasionally even violence. They eventually formed a fellowship to abolish the trade. The abolistionists also included many Africans who worked side by side with British abolitionists; they included Africans such as Olaudah Equiano, Quobna Ottobah Cugoano and Ignatius Sancho. Mission US. 1st Diary Entry - Diary of a Slave. A Diary of a Slave Girl - The Middle Passage.

The Middle Passage, Coast of Gambia in Africa to the West Coast of America: It felt like ages since that man came and unlocked our cage on the coast, probably because it has been. 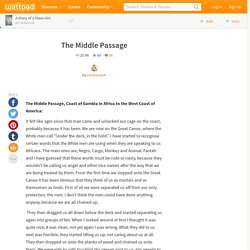 We are now on the Great Canoe, where the White men call “Under the deck, in the hold.” I have started to recognise certain words that the White men are using when they are speaking to us Africans. The main ones are; Negro, Cargo, Monkey and Animal. Fantah and I have guessed that these words must be rude or nasty, because they wouldn’t be calling us angel and other nice names after the way that we are being treated by them. They then dragged us all down below the deck and started separating us again into groups of ten. The smell is awful, absoleutly vile, it smells of excretion, vomit, sweat, rats, mice and everything else that comes along with that sort of thing. When I woke up I was confused, there was shouting and crying from around me and I didn’t have a clue why. 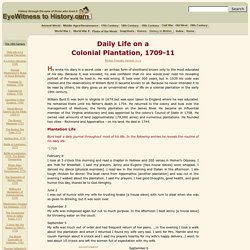 Because it was encoded, he was confident that no one would ever read his revealing portrait of the world he lived in. He was wrong. It took over 300 years, but in 1939 his code was cracked and the observations of William Byrd II became known to all. William Byrd II was born in Virginia in 1674 but was soon taken to England where he was educated. Byrd kept a daily journal throughout most of his life. February 8 I rose at 5 o'clock this morning and read a chapter in Hebrew and 200 verses in Homer's Odyssey.

June 2 I was out of humor with my wife for trusting Anaka [a house slave] with rum to steal when she was so given to drinking, but it was soon over. September 3 My wife was indisposed again but not to much purpose. September 6 About one o'clock this morning my wife was happily delivered of a son, thanks be to God Almighty. Personal account of an enslaved African. This is an extract from a book called The Interesting Narrative of the Life of Olaudah Equiano, or Gustavus Vassa, the African. 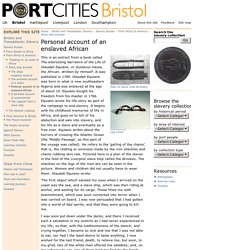 Written by Himself. It was published in 1789. Olaudah Equiano was born in what is now southeastern Nigeria and was enslaved at the age of about 10. Equiano bought his freedom from his master in 1766. The Crowning of King Cotton. University of Virginia Female slaves using the mechanical cotton gin. 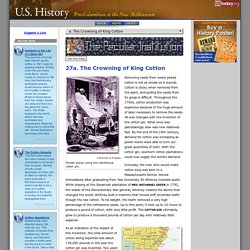 Removing seeds from newly picked cotton is not as simple as it sounds. A day in the life of..... Slave Life on a Southern Plantation. 10 Disturbing Things About Slave Auctions in America You May Not Know. Searching for Signs of Intelligence According to an account by Henry Bibb, an enslaved man who had made it to freedom only to be recaptured when he returned to the South for his wife and child, the most rigorous examination of the enslaved by the slave inspectors before sale was on gauging their intelligence. 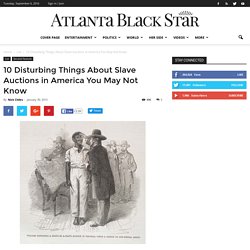 Intelligence was the most objectionable of all the qualities connected with the life of an enslaved person, Bibb said. Slave holders believed that when an enslaved Black person is intelligent, “it undermines the whole fabric of his chattel hood; it prepares for what slaveholders are pleased to pronounce the unpardonable sin when committed by a slave. It lays the foundation for running away and going to Canada.

They also see in it a love for freedom, patriotism, insurrection, bloodshed, and exterminating war against American slavery.” Roots Auction. Untitled. 2. How slaves were captured.

The North American mainland played a relatively minor role in the trans-Atlantic slave trade. Its ports sent out less than five percent of all known voyages, and its slave markets absorbed less than four percent of all slaves carried off from Africa. Freedom: A History of US. Webisode 5: A Fatal Contradiction. Introduction. Slavery Image Search. This map shows where the world’s 30 million slaves live. There are 60,000 in the U.S. Share of each country's population that is enslaved.