Interactive Tudor Games. The BBC Site provides free interactive learning games Tudor Joust www.tudorbritain.org/joust The Time Tunnel www.bbc.co.uk/history/walk/games_index.shtml Click on Tudor Street to play the Odd One Out Dress the Tudors and the Victorians www.bbc.co.uk/history/games/costumes/index.shtml In this game, kids will determine which piece of clothing belongs to which time period. 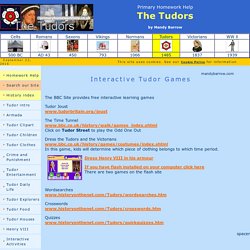 Dress Henry VIII in his armour If you have flash installed on your computer click here There are two games on the flash site. History - British History in depth: Tudors and Victorians: Dressing Up. V&A and The National Archives. The Tudors - Sites for pupils - 123ICT 123ICT. There are lots of interactive site for pupils to use when studying The Tudors. 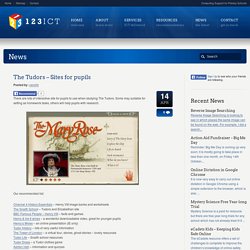 The Tudors in 50 moments – a new interactive mini-guide from BBC History Magazine. From Henry VII’s victory at the battle of Bosworth in 1485 to the dazzling reign of Elizabeth I, our new interactive mini-guide for iPad or iPhone charts the history of England’s best-known royal dynasty through the 50 moments that mattered most Learn about the formidable characters and pivotal events that shaped the Tudor era, and enjoy video interviews with leading Tudor historian Tracy Borman. 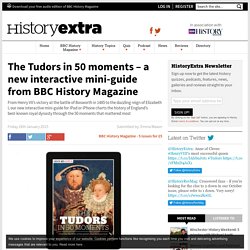 The Tudors in 50 Moments is available to download now for just £2.29/$2.99 in the BBC History Magazine app on iPad or iPhone. To download it, you will first need to have the free BBC History Magazine app downloaded to your device. This is available from the App Store. NMM: Tudor Exploration. Mary I. Mary Tudor was the only child born to Henry VIII and Catherine of Aragon to survive childhood.

Had she been born a boy, it is likely that the whole of English history would have been different (but probably less interesting!). Mary had a good childhood as a young princess, and was the center of court attention in her earliest years. But, as the years progressed and no little brothers followed, Mary's father began to look into the alternatives. Eventually, Henry sought an annulment from Catherine, and married his second Queen: Anne Boleyn. The Tudors. Today in History Births (250 years ago today): 1766 - Charlotte, Princess Royal of England (d. 1828) Births (200 years ago today): 1816 - Paul Féval, père, French author and playwright (d. 1887) 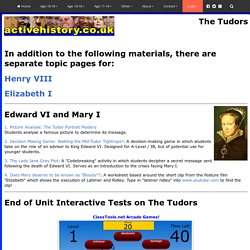 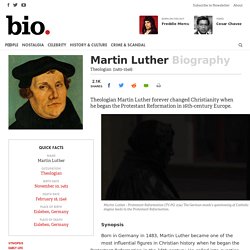 Synopsis Born in Germany in 1483, Martin Luther became one of the most influential figures in Christian history when he began the Protestant Reformation in the 16th century. He called into question some of the basic tenets of Roman Catholicism, and his followers soon split from the Roman Catholic Church to begin the Protestant tradition. I Am King Henry (The Six Wives of Henry the 8th with LYRICS) Lesson 1 2.