The History of Fly Fishing - Streamworks. Streamworks StreamWorks is a company that was born with its feet in the water. 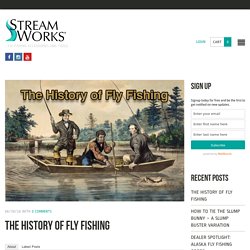 Our founders are avid fishermen and outdoor enthusiasts. With an interest in developing products that make your outdoor experience more enjoyable, our products reflect innovation, quality and value. Our patented technologies and innovative ideas have created outdoor gear that is better and smarter. Latest posts by Streamworks (see all) When you watch someone who is really good at fly fishing, it looks so effortless and simple.

First and foremost, we need to define fly fishing. The first reference of the technique is made and said to be from Roman Claudius Aelianus around the end of the second century where he describes the practice as seen from the people of Macedonia, through how they plan to catch fish using a rod and a line and what sounds a lot like an artificial fly: ‘…they have planned a snare for the fish, and get the better of them by their fisherman’s craft. . . . Ondrej Rusnák - Photos de la publication de Ondrej Rusnák. Rrizwan Kkhalid - Photos de la publication de Rrizwan Kkhalid. Zari by Courtney Marsh.

The “helper robot” character is a science fiction staple. 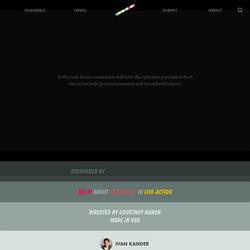 From the likes of Rosie on the Jetsons to the darker, more existential realms of HAL in Kubrick’s 2001, we have often envisioned cinematic futures where robot servants are commonplace. Director Courtney Marsh’s ZARI is another entry into this very specific canon. Like Ruairi Robinson’s Blinky before it, this short takes an established science fiction trope and manages to infuse it with some new (artificial) life. The basic story is one that actually feels quite familiar (robot attempts to “feel”), but the storytelling itself is quite innovative. 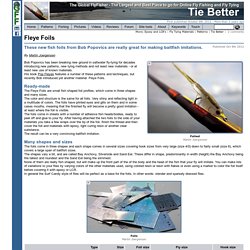 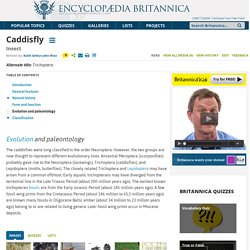 You can also highlight a section and use the tools in this bar to modify existing content: We welcome suggested improvements to any of our articles. You can make it easier for us to review and, hopefully, publish your contribution by keeping a few points in mind: Encyclopaedia Britannica articles are written in a neutral, objective tone for a general audience. You may find it helpful to search within the site to see how similar or related subjects are covered. Any text you add should be original, not copied from other sources. Srpice. Caddisfly. Ecology[edit] Although caddisflies may be found in waterbodies of varying qualities, species-rich caddisfly assemblages are generally thought to indicate clean water. 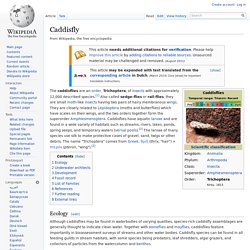 Together with stoneflies and mayflies, caddisflies feature importantly in bioassessment surveys of streams and other water bodies. Caddisfly species can be found in all feeding guilds in stream habitats, with some species being predators, leaf shredders, algal grazers, and collectors of particles from the watercolumn and benthos. Underwater architects[edit] Caddis. Evolution of insects. Based on genome sequencing data, it is estimated that the class of insects originated on Earth about 480 million years ago, in the Ordovician, at about the same time as terrestrial plants appeared.[1] Insects evolved from a group of crustaceans.[2] They were the first animals to develop flight, about 400 million years ago in the the Devonian period.[1] The oldest definitive insect fossil, Rhyniognatha hirsti, is estimated to be 407 to 396 million years old. 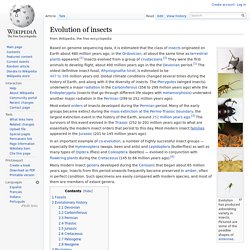 Global climate conditions changed several times during the history of Earth, and along with it the diversity of insects. The Pterygotes (winged insects) underwent a major radiation in the Carboniferous (356 to 299 million years ago) while the Endopterygota (insects that go through different life stages with metamorphosis) underwent another major radiation in the Permian (299 to 252 million years ago). Fossils[edit] Evolutionary history[edit] Devonian[edit] Carboniferous[edit] Permian[edit] Insect Family Tree Maps 400-Million-Year Evolution. Creating a family tree that dates back more than 400 million years and details the evolution of the most diverse group of animals on the planet is no easy feat, but one ambitious group of scientists has done just that. 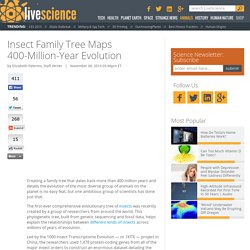 The first-ever comprehensive evolutionary tree of insects was recently created by a group of researchers from around the world. This phylogenetic tree, built from genetic sequencing and fossil data, helps explain the relationships between different kinds of insects across millions of years of evolution. Led by the 1000 Insect Transcriptome Evolution — or 1KITE — project in China, the researchers used 1,478 protein-coding genes from all of the major insect orders to construct an enormous dataset detailing the genetic makeup of all the major insect groups that exist today. They then compared this dataset with the insect fossil record to determine when different species evolved. [See photos from the insect family tree] Sea_upo_6_kacov_hot. Biotopy tekoucích vod. Biotopy tekoucích vod a jejich společenstva Obr. 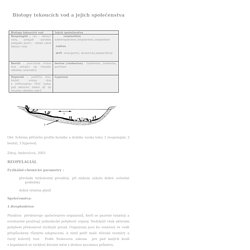 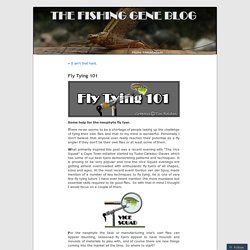 There never seems to be a shortage of people taking up the challenge of tying their own flies and that to my mind is wonderful. Personally I don’t believe that anyone ever really reaches their potential as a fly angler if they don’t tie their own flies or at least some of them. What primarily inspired this post was a recent evening with “The Vice Squad” a Cape Town initiative started by Tudor Caradoc-Davies which has some of our best tyers demonstrating patterns and techniques. It is proving to be very popular and now the Vice Squad evenings are getting almost overcrowded with enthusiastic fly tyers of all shapes, sizes and ages. A prototype leather and wool dry fly wallet I have... Craft and Lore. Prototype Mason Pint Wrap I’ve been playing with in the Craft and Lore workshop. codyadventures asked: I am really intrigued by leather work. 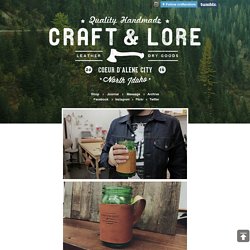 Is it a difficult task to learn? It only depends on how much you’re willing to work at it. I found it to be easy, but I know others have struggled with it. Fan made film featuring the Port Wallet. Handmade heritage quality leather wallets. Untitled. Alluring Lures: ‘The History of Fly-Fishing in Fifty Flies’ Flyfishersentomo1836rona. Izaak Walton and the Dame's Dozen 1496-1653. “You are to note, that there are twelve kinds of artificial-made Flies to angle with upon the top of the water.”

So writes Izaak Walton in 1653, paraphrasing the words of Dame Juliana Berners which read “Thyse ben the .xij. flyes wyth whyche ye shall angle to ye trought and grayllyng and dubbe lyke as ye shall now here me tell.” The following twelve flies are some of the earliest written in the English language, indeed some of the earliest patterns written that we know of. Originally found in Dame Juliana Berners “ A Treatyse of Fyssynge Wyth an Angle,” published in 1496 by Wynkyn de Worde, they have been translated and copied ever since.

Most of us might also recognize them from Izaak Walton’s great work, "The Compleat Angler," wherein they form his list of twelve, only slightly changed from the originals, and that change being simply translation differences between the English of 1496 and 153 years later in 1653 The Tandy Fly at St. The Shell Fly at St. 1995-Vol21-No2web. Medieval and Renaissance Flies: Izaak Walton and the Dame's Dozen 1496-1653. 2001-Vol27-No1web. GRAYLING SOCIETY HOLLAND. Taylor, Samuel (1800). Angling in All Its Branches. London: T. M. TWISTED BODY MICRO CDC PATTERNS - TomSutcliffe - The Spirit of Fly Fishing. TWISTED HERL EXTENDED BODY CDC MAYFLY in MICRO-PATTERNS. By Agostino Roncallo When I realized that the right way to make good artificial flies is pure simplicity, I understood also that the best material for simplicity is CDC.

With CDC I produced all the patterns of my book Magie in CDC, producing effective imitations of mayflies, caddis, stoneflies, Daddy Long Legs, ants, spiders and midges. I believe small imitations are much more convincing to trout, and because they are so small there is no need to waste time giving them all the anatomical parts of small insects. Fishing Woolly Buggers. "I can't promise you a trophy rainbow on your first cast with a Woolly Bugger, but I can safely promise you will over time catch a variety of fish under a variety of conditions, often when nothing else is working.

" Black Woolly Bugger RUSSELL BLESSING, who invented the pattern, says he usually starts out dead-drifting the Bugger, “to see what happens.” If that doesn’t produce, he will add jigging motions on the strip, jig it back at the end of the drift as Barry Beck described [see several paragraphs below], cast up and across the current and let it swing, use hand-strip retrieves. “Sometimes,” he says, “it takes fast strips. Some of the guys around here will strip it as fast as they can.

Al Rockwood, the Michigan steelhead guru and steelhead fly tier, says, “In my opinion, the Woolly Bugger is the most effective wet fly for trout in Michigan. Woolly Bugger. The Woolly Bugger is an artificial fly commonly categorized as a wet fly or streamer and is fished under the water surface. It is a popular and widely used pattern for both freshwater and saltwater game fish and is generally listed as one of the top patterns to have in any fly box.

John Gierach, a noted Fly Fishing writer discussed the Woolly Bugger first in his chapter on streamers in Good Flies. [2] Woolly Buggers are typically fished in streams, rivers, ponds, lakes, and tidal flats. CDC Caddis - Fly tying with Marc Petitjean. SMHAEN. Parachute Adams, Size 22 with a Twist. Fly Tying instructions. Fly Tying Proportions: Rosen’s Formulas for Success. If I get out of the habit of fly tying, I oftentimes forget the rules of proportion. Then in the middle of the fly, I realize I need a refresher course, and can’t remember where the heck I put that diagram for reference. My thread bobbin is left spinning as I curse and rummage through my fly tying box searching for that old 3 x 5. After researching proportion diagrams on the internet, I discovered these simple hand drawings and formulas on Rosen’s Fly Fishing Blog. After sitting a moment with my morning coffee to process these formulas (and after selecting the English translation), I now totally dig ‘em.

Researching information in my pile of books and via the internet, I did notice that many diagrams vary significantly in regards to the proportions of nymphs: length of tail, thorax, legs and wing case all vary. Proportion is like yoga for beginners. Vag Wing Caddis - A nice caddis pattern - fly fishing video channel. Catching My Fair Share: January 2011. Seems like the only way to get noticed in fly fishing or fly tying these days is to be an old, grizzled veteran, who only fishes dry flies and writes books about it - or you need to be one of those Xtreme Fly Fishermen who go to Mongolia to catch teimen, have long dirty hair, a beard and film it all for the big screen to help pay for your fly fishing "habit". Being a young clean guy, living on the other side of the world, and enjoying fishing in your home country will hardly get you noticed. Fluttering Foam Caddis SBS.