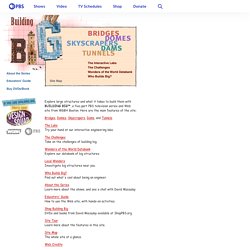 Here are the main features of the site: Bridges, Domes, Skyscrapers, Dams, and Tunnels. The Labs Try your hand at our interactive engineering labs. The Challenges Take on the challenges of building big. Wonders of the World Databank Explore our databank of big structures. Local Wonders Investigate big structures near you. Who Builds Big? About the Series Learn more about the shows, and see a chat with David Macaulay. Educators' Guide How to use the Web site, with hands-on activities.

Shop Building Big DVDs and books from David Macaulay available at ShopPBS.org. Site Tour Learn more about the features in this site. Site Map The whole site at a glance. Web Credits Feedback Help. The First Skyscrapers (And How They Became Possible) The first skyscrapers -- tall commercial buildings with iron or steel frameworks -- came about in the late-19th and early-20th centuries, and the Chicago Home Insurance Building is generally considered the first modern skyscraper despite being just 10 stories high. 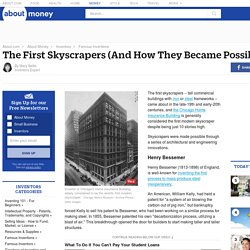 Skyscrapers were made possible through a series of architectural and engineering innovations. Henry Bessemer Henry Bessemer (1813-1898) of England, is well-known for inventing the first process to mass-produce steel inexpensively. An American, William Kelly, had held a patent for "a system of air blowing the carbon out of pig iron," but bankruptcy forced Kelly to sell his patent to Bessemer, who had been working on a similar process for making steel. In 1855, Bessemer patented his own "decarbonization process, utilizing a blast of air. " continue reading below our video Loaded: 0% Progress: 0% Modern steel today is still made using technology based on Bessemer's process. George Fuller. SkyscraperPage.com. Skyscrapers - Great Buildings - Architecture Online. Places to Visit in New York - Observation Deck. Empire State Building. The Empire State Building Tallest building in the world when it was completed in April 1931, the EMPIRE STATE broke every record in the book. 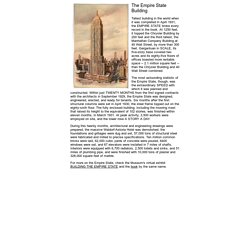 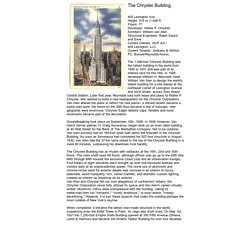 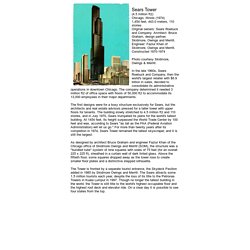 Architect: Bruce Graham, design partner, Skidmore, Owings and Merrill. Engineer: Fazlur Khan of Skidmore, Owings and Merrill. Constructed 1970-1974 Photo courtesy Skidmore, Owings & Merrill. In the late 1960s, Sears Roebuck and Company, then the world's largest retailer with $8.9 billion in sales, decided to consolidate its administrative operations in downtown Chicago. The first designs were for a boxy structure exclusively for Sears, but the architects and real estate advisors pressed for a taller tower with upper floors for tenants. As designed by architect Bruce Graham and engineer Fazlur Khan of the Chicago office of Skidmore Owings and Merrill (SOM), the structure was a "bundled tube" system of nine squares with sides of 75 feet (for an overall 225 x 225 ft), sheathed in a curtain wall of dark tinted glass. Petronas Towers. 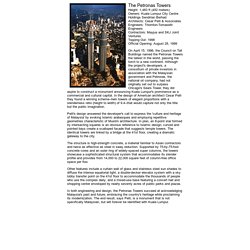 Although the project's developers, a consortium of private investors in association with the Malaysian government and Petronas, the national oil company, had not originally set out to surpass Chicago's Sears Tower, they did aspire to construct a monument announcing Kuala Lumpur's prominence as a commercial and cultural capital. In the design of American architect Cesar Pelli they found a winning scheme--twin towers of elegant proportions with a slenderness ratio (height to width) of 9.4--that would capture not only the title but the public imagination. Chrysler Building. The Skyscraper Museum. BUILDING BIG: The Skyscraper Challenge. Build a Bridge. Websites American Society of Civil Engineers A site for engineering professionals with information on publications, job openings, educational programs, conferences, and other industry resources. 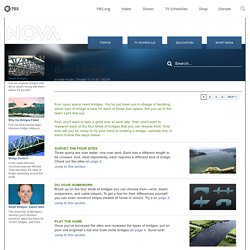 Association for Bridge Construction and Design Learn about the activities of this organization devoted to improving the science of bridge design, construction, and maintenance. Precast/Prestressed Concrete Institute This organization is dedicated to fostering greater understanding and use of precast/prestressed concrete.