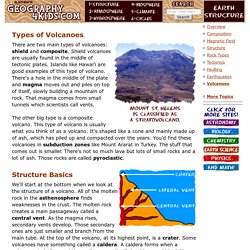 Shield volcanoes are usually found in the middle of tectonic plates. Islands like Hawai'i are good examples of this type of volcano. There's a hole in the middle of the plate and magma moves out and piles on top of itself, slowly building a mountain of rock. That magma comes from small tunnels which scientists call vents. The other big type is a composite volcano. We'll start at the bottom when we look at the structure of a volcano. Just as there are multiple types of volcanoes, there are three types of lava. The second type is mafic lava. Last, but not least, is intermediate lava. Or search the sites for a specific topic. CBBC - Newsround - What causes volcanoes? Weekly Reader Current Events. A giant volcano on the island of Hawaii is becoming active, scientists say. 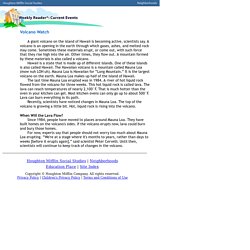 A volcano is an opening in the earth through which gases, ashes, and melted rock may come. Sometimes these materials erupt, or come out, with such force that they rise high into the air. Other times, they flow out. A mountain formed by these materials is also called a volcano. Hawaii is a state that is made up of different islands. The last time Mauna Loa erupted was in 1984. Recently, scientists have noticed changes in Mauna Loa.

Since 1984, people have moved to places around Mauna Loa. For now, experts say that people should not worry too much about Mauna Loa erupting. GeoTopics @ GeoNet. What is a volcano? 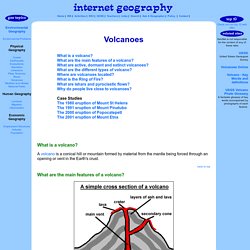 A volcano is a conical hill or mountain formed by material from the mantle being forced through an opening or vent in the Earth's crust. back to top What are the main features of a volcano? What are active, dormant and extinct volcanoes? Volcanoes are found in three states - extinct, dormant and active. Where are volcanoes located? Volcanoes are found along destructive (subducting) (diagram) plate boundaries, constructive (divergent) (diagram) plate boundaries and at hot spots in the earth's surface. What is the Ring of Fire? The 'Ring of Fire' (map) is a volcanic chain surrounding the Pacific Ocean. What are lahars and pyroclastic flows?

The most destructive aspect of volcanoes are lahars and pyroclasic flows. Why do people live close to volcanoes? Volcanoes have a wide range of effects on humans. People live close to volcanoes because Geothermal energy can be harnessed by using the steam from underground which has been heated by the Earth's magma. Volcano-profile. Volcanoes are awesome manifestations of the fiery power contained deep within the Earth. 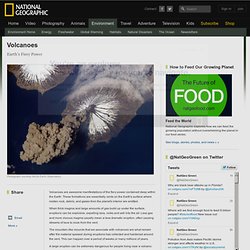 These formations are essentially vents on the Earth's surface where molten rock, debris, and gases from the planet's interior are emitted. When thick magma and large amounts of gas build up under the surface, eruptions can be explosive, expelling lava, rocks and ash into the air. Less gas and more viscous magma usually mean a less dramatic eruption, often causing streams of lava to ooze from the vent. The mountain-like mounds that we associate with volcanoes are what remain after the material spewed during eruptions has collected and hardened around the vent. This can happen over a period of weeks or many millions of years. A large eruption can be extremely dangerous for people living near a volcano. Volcanoes tend to exist along the edges between tectonic plates, massive rock slabs that make up Earth's surface.

Online Activities: Weather Watch. Volcanoes The Basics What is it? 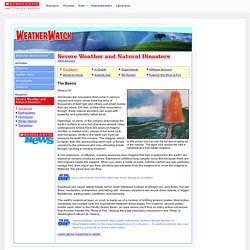 Volcanoes are mountains that come in various shapes and sizes, some towering tens of thousands of feet high and others just small domes that rise about 100 feet. Unlike other mountains, though, these natural wonders can erupt with powerful and potentially lethal force. Openings, or vents, in the volcano lead below the earth's surface to very hot chambers several miles underground where there are pools of magma (molten or melted rock), pieces of hot solid rock, and hot gases.

A non-explosive, or effusive, volcano produces lava (magma that has erupted from the earth). Lava can travel up to 60 miles per hour during an eruption. Eruptions can cause lateral blasts (which blow sideways instead of straight up), lava flows, hot ash flows, mudslides, avalanches, and falling ash.