Why the Maya Fell: Climate Change, Conflict—And a Trip to the Beach? Part of our weekly "In Focus" series—stepping back, looking closer. Belize's Yok Balum cave yielded stalagmite samples for a new study. Photograph courtesy Douglas Kennett, Penn State. Every civilization has its rise and fall. But no culture has fallen quite like the Maya Empire, seemingly swallowed by the jungle after centuries of urban, cultural, intellectual, and agricultural evolution. What went wrong? But first came the boom years, roughly A.D. 300 to 660. Surrounded by pyramids, plazas, ball courts, and government buildings, the urban Maya discussed philosophy, developed an accurate solar-year calendar, and relished a thick, bitter beverage made from cacao beans: the world's first hot chocolate.

Farmers, too, were riding high, turning hillsides into terraced fields to feed the burgeoning population. Then came the bust, a decline that lasted at least two centuries. (Also see "Climate Change May Have Killed Off Maya Civilization, Study Says. ") Flowering With the Rain (Take a Maya quiz.) Giant Maya Carvings Found in Guatemala. Photograph courtesy Francisco Estrada-Belli Archaeologist Anya Shetler cleans an inscription below an ancient stucco frieze recently unearthed in the buried Maya city of Holmul in the Peten region of Guatemala. Sunlight from a tunnel entrance highlights the carved legs of a ruler sitting atop the head of a Maya mountain spirit.

The enormous frieze—which measures 26 feet by nearly 7 feet (8 meters by 2 meters)—depicts human figures in a mythological setting, suggesting these may be deified rulers. It was discovered in July in the buried foundations of a rectangular pyramid in Holmul. Maya archaeologist Francisco Estrada-Belli and his team were excavating a tunnel left open by looters when they happened upon the frieze. According to Estrada-Belli, the frieze is one of the best preserved examples of its kind. Maya archaeologist Marcello Canuto agreed, calling the frieze "amazingly and beautifully preserved.

" Caught Between Two Great Powers All About Location Staying Put for Now —Ker Than. Www.lacma.org/sites/default/files/MayaCurriculum2010.pdf. Maya Writing - Writing in Maya Glyphs: A Non-Technical Introduction to Maya Glyphs. In the history of the world, there have been few people like the ancient Maya. 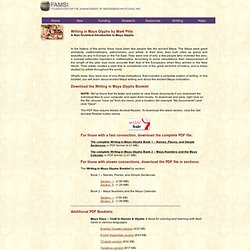 The Maya were great architects, mathematicians, astronomers, and artists. In their time, they built cities as grand and beautiful as any in Europe or the Far East. They were one of only a few people who invented the zero, a concept extremely important in mathematics. According to some calculations, their measurement of the length of the year was more accurate than that of the Europeans when they arrived in the New World. Their artists created a style that is considered one of the great art forms of history, and is today studied by artists throughout the world.

What's more, they were one of only three civilizations that invented a complete system of writing. Download the Writing in Maya Glyphs Booklet NOTE: We've found that it's faster and easier to view these documents if you download the individual files to your computer and open them locally. The PDF files require Adobe Acrobat Reader. Mayan Empire Documentary Part 1.

ClassZone.com. Maya Civilization About 2,800 years ago, people known as the Maya lived in farming villages on the Yucatan Peninsula and the highlands to the south. 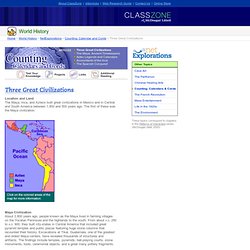 From about A.D. 250 to A.D. 900, they built city-states in Central America that included great pyramid temples and public plazas featuring huge stone columns that recounted their history. Excavations at Tikal, Guatemala, one of the greatest and oldest Maya centers, have revealed thousands of structures and artifacts. The findings include temples, pyramids, ball-playing courts, stone monuments, tools, ceremonial objects, and a great many pottery fragments. The limestone of the Yucatan Peninsula was easily quarried and used for building and tool making. In the south, volcanoes stretched over the highlands and yielded valuable resources. Incan Civilization The Inca began settling in the Valley of Cuzco in the Andes Mountains of central Peru around the year 1200. 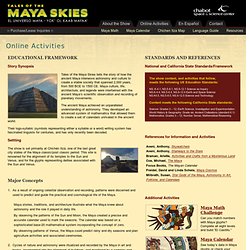 Maya culture, life, architecture, and legends were intertwined with the ancient Maya’s scientific observation and recording of planetary movements. The ancient Maya achieved an unparalleled understanding of astronomy. They developed an advanced system of mathematics that allowed them to create a set of calendars unrivaled in the ancient world. Their logo-syllabic (symbols representing either a syllable or a word) writing system has fascinated linguists for centuries, and has only recently been decoded. Settting.