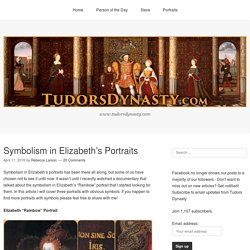 It wasn’t until I recently watched a documentary that talked about the symbolism in Elizabeth’s “Rainbow” portrait that I started looking for them. In this article I will cover three portraits with obvious symbols. If you happen to find more portraits with symbols please feel free to share with me! Elizabeth “Rainbow” Portrait Elizabeth had lots of symbolism in her portraits that is easy to overlook. For example, this “Rainbow” portrait is loaded with symbolism and I’m not sure how I never noticed it before.

“Mon Sine Sole Iris” means No Rainbow Without the Sun. We can also note that there are lots of pearls in this portrait…The pearls symbolize virginity. The “Phoenix” Portrait Here’s another portrait, the “Phoenix” portrait. Note the phoenix. The “Ermine” portrait. Here are more symbols “hidden” within her portraits. History - Elizabeth I: An Overview. HOMEWORK: Character Cards - use the websites to fill in the character cards on William Cecil and the Privy Council. 1.1.3 HOMEWORK Cecil and Privy Council Character Cards. HOMEWORK Who was William Cecil? KS3 > The Reformation > MPs > William Cecil Cecil served in Parliaments under Henry VIII, Edward VI and Mary I. 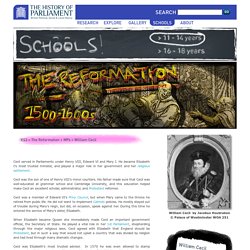 He became Elizabeth I’s most trusted minister, and played a major role in her government and her religious settlement. Cecil was the son of one of Henry VIII’s minor courtiers. His father made sure that Cecil was well-educated at grammar school and Cambridge University, and this education helped make Cecil an excellent scholar, administrator, and Protestant reformer. Cecil was a member of Edward VI’s Privy Council, but when Mary came to the throne he retired from public life. When Elizabeth became Queen she immediately made Cecil an important government official, the Secretary of State. Cecil was Elizabeth’s most trusted advisor. Cecil’s attitude towards Catholics hardened in later years, and he began to see them all as a threat to Elizabeth and Protestant England.

In 1571 Cecil became Lord Burghley, and moved into the House of Lords. HOMEWORK What was the Privy Council? The Privy Council was responsible for the general administration of the country. 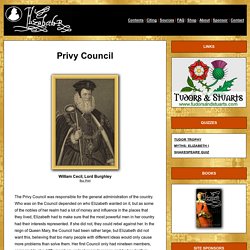 Who was on the Council depended on who Elizabeth wanted on it, but as some of the nobles of her realm had a lot of money and influence in the places that they lived, Elizabeth had to make sure that the most powerful men in her country had their interests represented. If she did not, they could rebel against her. In the reign of Queen Mary, the Council had been rather large, but Elizabeth did not want this, believing that too many people with different ideas would only cause more problems than solve them. Her first Council only had nineteen members, compared to about fifty members under her predecessor, and by her death in 1603, this had been reduced to thirteen. The Privy Councillors were involved in an array of governmental areas, including religion, military matters, the Queen's security, economics, and the welfare of the people.