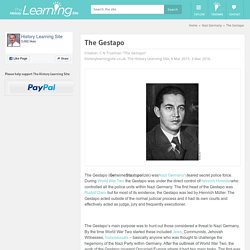 During World War Two the Gestapo was under the direct control ofHeinrich Himmlerwho controlled all the police units within Nazi Germany. The first head of the Gestapo was Rudolf Diels but for most of its existence, the Gestapo was led by Heinrich Müller. The Gestapo acted outside of the normal judicial process and it had its own courts and effectively acted as judge, jury and frequently executioner. The Gestapo’s main purpose was to hunt out those considered a threat to Nazi Germany. By the time World War Two started these included Jews, Communists, Jehovah Witnesses, homosexuals – basically anyone who was thought to challenge the hegemony of the Nazi Party within Germany. 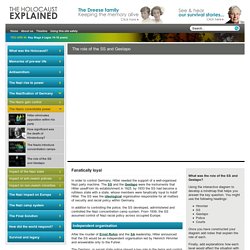 Using the interactive diagram to develop a mindmap that helps you answer the key question. You might use the following headings: HimmlerSSGestapoPoliceCourts Once you have constructed your diagram add notes that explain the role of each. Finally, add explanations how each level would affect the situation with Germany. The SS and terror. Concentration camps in Nazi Germany. Concentration camps in Nazi Germany served a number of purposes. 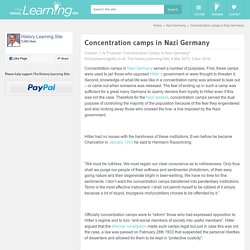 First, these camps were used to jail those who opposed Hitler’s government or were thought to threaten it. Second, knowledge of what life was like in a concentration camp was allowed to leak out – or came out when someone was released. The fear of ending up in such a camp was sufficient for a great many Germans to openly declare their loyalty to Hitler even if this was not the case. 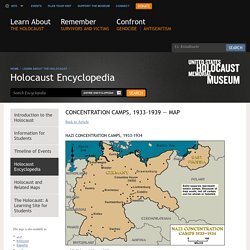 The Storm Troopers (SA) and the police established concentration camps beginning in February 1933. These camps were set up to handle the masses of people arrested as alleged political opponents.