4.4 Persecution of Jews and other groups in Nazi Germany

4.4 Nazi treatment of outsiders homework instructions. 4.4 Homework The badge system for prisoners. Although the symbols worn by prisoners differed from camp to camp, the Nazis used the wearing of badges to differentiate between the prisoners in camps. 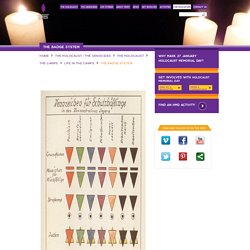 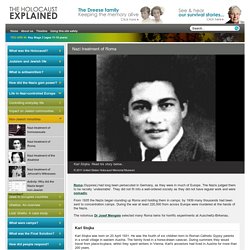 He was the fourth of six children born to Roman Catholic Gypsy parents in a small village in eastern Austria. The family lived in a horse-drawn caravan. VIDEO Nazi Treatment of Gypsies. Nazi treatment of the disabled. The Nazis began a huge propaganda campaign against mentally and physically disabled Germans. 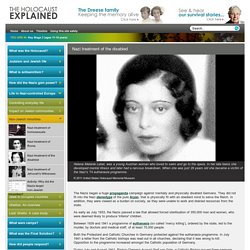 They did not fit into the Nazi stereotype of the pure Aryan, that is physically fit with an obedient mind to serve the Reich. In addition, they were viewed as a burden on society, as they were unable to work and drained resources from the state. As early as July 1933, the Nazis passed a law that allowed forced sterilisation of 350,000 men and women, who were deemed likely to produce 'inferior' children. Between 1939 and 1941 a programme of euthanasia (so called ‘mercy killing’), ordered by the state, led to the murder, by doctors and medical staff, of at least 70,000 people. Both the Protestant and Catholic Churches in Germany protested against the euthanasia programme. VIDEO Treatment of disabled - Euthanasia (T4) Programme.

Aktion T4 - the case of Anna Lehnkering. Nazi treatment of homosexuals. Artist Richard Grune, was an artist who trained at the famous Bauhaus school in Weimar.