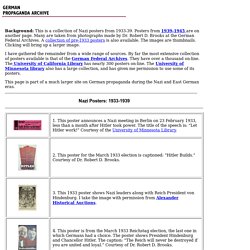 Posters from 1939-1945 are on another page. Many are taken from photographs made by Dr. Robert D. Brooks at the German Federal Archives. A collection of pre-1933 posters is also available. Nazi Approved & Banned Art. The Radio Nazi Germany. Leni Riefenstahl's 1934 film Triumph of the Will. The Horst Wessell Song - a Nazi favourite. Hitler's favourite composer, Richard Wagner.