Arawak Religious Practices. The Arawak/Taino were polytheists and their gods were called Zemi. 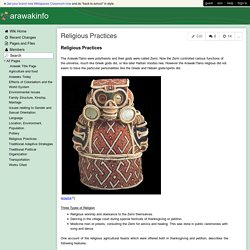 Now the Zemi controlled carious functions of the universe, much like Greek gods did, or like later Haitian Voodoo Iwa. However the Arawak/Taino relgious did not seem to have the particular personalities like the Greek and Hatiain gods/spirits did. (source)Three Types of ReligionReligious worship and obeisance to the Zemi themselves.Dancing in the village court during special festivals of thanksgiving or petition.Medicine men or priests, consulting the Zemi for advice and healing. This was done in public ceremonies with song and danceOne account of the religious agricultural feasts which were offered both in thanksgiving and petition, describes the following features: People had special dress for the ceremonies that included paint and feathers. From their knees on down they would be covered in shells. (source)People induced vomiting with a swallowing stick. Arawak Family Structure & Marriage. Skip to main content Try Wikispaces Classroom now. 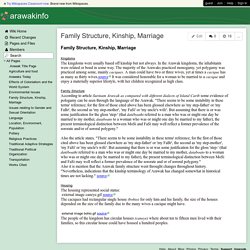 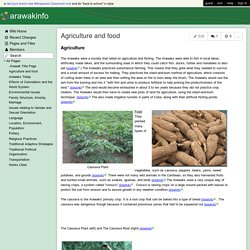 The Arawaks were able to fish in local lakes, artificially made lakes, and the surrounding seas in which they could catch fish, ducks, turtles and manatees to also eat (source ).The Arawaks practiced subsistence farming. This means that they grew what they needed to survive and a small amount of excess for trading. They practiced the slash-and-burn method of agriculture, which consists of cutting down trees in an area and then setting the area on fire to burn away the brush. The Arawaks would use the ash from the burning and mix it "with fish and urine to produce fertilizer to help prolong the productiveness of the land.

" (soucre) The land would become exhausted in about 5 to ten years because they did not practice crop rotation. They planted many types of vegetables, such as cassava, peppers, beans, yams, sweet potatoes, and gourds (source). This has some good images and information. Arawak people audience with the Dutch Governor in Paramaribo, Suriname, 1880. 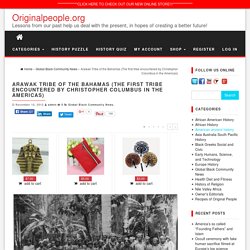 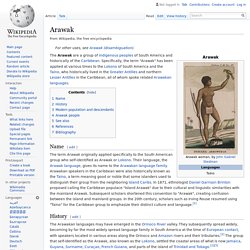 Specifically, the term "Arawak" has been applied at various times to the Lokono of South America and the Taíno, who historically lived in the Greater Antilles and northern Lesser Antilles in the Caribbean, all of whom spoke related Arawakan languages. Name[edit] The term Arawak originally applied specifically to the South American group who self-identified as Arawak or Lokono.

Their language, the Arawak language, gives its name to the Arawakan language family. Arawakan speakers in the Caribbean were also historically known as the Taíno, a term meaning good or noble that some islanders used to distinguish their group from the neighboring Island Caribs. This is a definition of the Arawak - useful to read. Just choose bits from this site that are useful for your topics.

History of Amerindians in the Caribbean, the Arawaks. 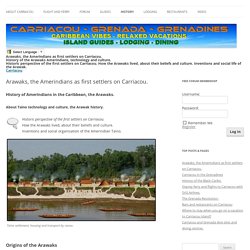 About Taino technology and culture, the Arawak history. Historic perspective of the first settlers on Carriacou. How the Arawaks lived, about their beliefs and culture. Inventions and social organisation of the Amerindian Taino. Taino settlement, housing and transport by canoe. A startling fact. If you were to go to Santo Domingo today people would tell you that their Amerindian ancestors were the ‘Taino’. As a matter of fact, Indians of the Greater Antilles did not call themselves ‘Taino‘, nor do they call themselves ‘Arawak‘ .

In general, the native people from the Greater Antilleans prefer to call themselves Taino. Amazonian Arawak women. This website has lots of information - you don't need to read it all but pick and choose the topics you like. Below is an overview of the Arawak/Taino Indians, the original natives of the land today called Haiti (and Dominican Republic). 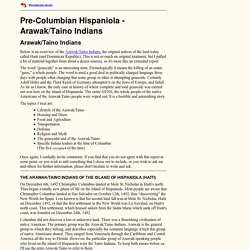 This is not so much an original treatment, but I pulled a lot of material together from about a dozen sources, so it's more like an extended report. The word genocide is an interesting term. Etymologically it means the killing of an entire gens, a whole people. The word is used a good deal in politically charged language these days with people often charging that some group or other is attempting genocide.