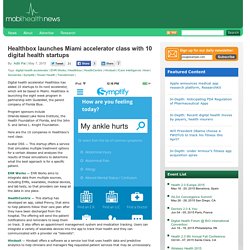 Healthbox is launching the eight week program in partnership with GuideWell, the parent company of Florida Blue. Program sponsors include Orlando-based Lake Nona Institute, the Health Foundation of Florida, and the John S. and James L. Knight Foundation. Here are the 10 companies in Healthbox’s next class: Avatar DSS — This startup offers a service that simulates multiple treatment options for a certain disease and analyzes the results of these simulations to determine what the best approach is for a specific patient. 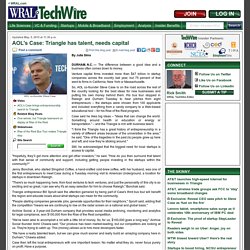 Published: 2015-05-05 17:16:00 Updated: 2015-05-05 23:30:14 By Julia Sims Durham, N.C. — The difference between a good idea and a business often comes down to money. Venture capital firms invested more than $47 billion in startup companies across the country last year, but 75 percent of that went to firms in California, New York or Massachusetts. So, AOL co-founder Steve Case is on the road across the rest of the country looking for the best ideas for new businesses and putting his own money behind them. Case said he likes big ideas – "Ideas that can change the world. "I think the Triangle has a great history of entrepreneurship in a variety of different areas because of the universities in the area," he said. Still, he acknowledged that the biggest need for local startups is access to capital. "Hopefully, they’ll get more attention and get other investors," he said. "We've been able to accomplish a lot with a little bit of money. 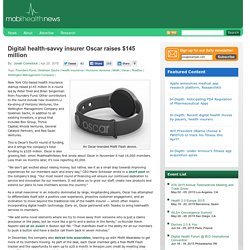 New York City-based health insurance startup raised $145 million in a round led by Peter Thiel and Brian Singerman from Founders Fund. Other contributors to the round include new investors Li Ka-shing of Horizons Ventures, the Wellington Management Company and Goldman Sachs, in addition to all existing investors, a group that includes Box Group, Thrive Capital, Khosla Ventures, General Catalyst Partners, and Red Swan Ventures. This is Oscar’s fourth round of funding, and it brings the company’s total funding to $320 million. Oscar is also growing fast: when MobiHealthNews first wrote about Oscar in November it had 16,000 members. Less than six months later, it’s now reporting 40,000. “We don’t get excited about raising money, but rather, see it as a small step towards improving experiences for our members each and every day,” CEO Mario Schlosser wrote in a short post on the company’s blog. 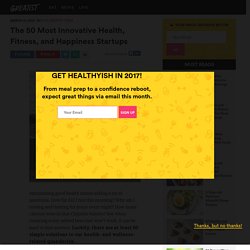 How far did I run this morning? Why am I tossing and turning for hours every night? How many calories were in that Chipotle burrito? But when counting every refried bean just won’t work, it can be hard to find answers. Luckily, there are at least 50 simple solutions to our health- and wellness-related quandaries. We’re talking apps that can see inside food packaging; personal trainers that fit in our back pocket; and bloggers who dig up the latest research on the science of meditation. There are plenty of awesome health and wellness startups out there, and we had a hard time choosing just 50 to feature. 17 Game-Changing Health Start-ups. You're automatically signed up for the Inc. 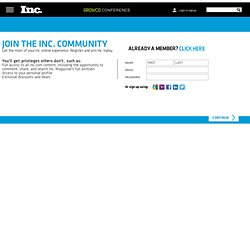 Wire, so you never miss a single day's most important news, tips, or ideas. Roll over the name of the other Inc. newsletters to see how you can get great Inc. articles on the topics that matter most to you. The news-from all over the web-entrepreneurs need to know now. Blueprint Health reveals 11 startups in its third class. Blueprint Health, a mentor-focused health incubator that offers co-working space in New York City, has announced its Winter 2013 class of startups — its third. 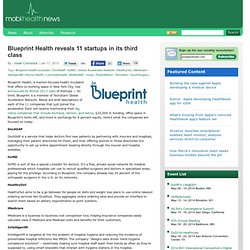 Blueprint is a member of TechStars’ Global Accelerator Network. Below are brief descriptions of each of the 11 companies that just joined the accelerator. Each will receive mentorship from big name companies that include Humana, Verizon, and Aetna, $20,000 in funding, office space in Blueprint’s SoHo loft, and more in exchange for 6 percent equity. Here’s what the companies are focused on today: DocASAP DocASAP is a service that helps doctors find new patients by partnering with insurers and hospitals, managing their patient directories for them, and then offering doctors in those directories the opportunity to set up online appointment booking directly through the insurer and hospital websites. forMD forMD is sort of like a special LinkedIn for doctors.