Cyclical versus Linear Setting in Jane Eyre and Great Expectations. Ickens and Brontë use setting as an important role in the search for domesticity. 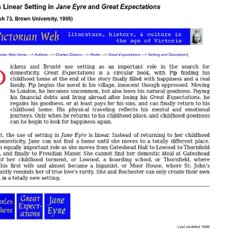 Great Expectations is a circular book, with Pip finding his childhood home at the end of the story finally filled with happiness and a real family. Pip begins the novel in his village, innocent though oppressed. Moving to London, he becomes uncommon, but also loses his natural goodness. Paying his financial debts and living abroad after losing his Great Expectations , he regains his goodness, or at least pays for his sins, and can finally return to his childhood home. His physical traveling reflects his mental and emotional journeys. Descriptions of Rooms in “The Palace of Art" and Great Expectations. Ennyson and Dickens both use setting, more specifically description of rooms as a technique to describe different states of being. 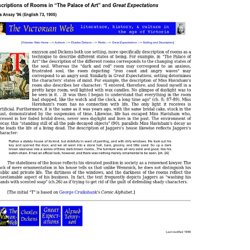 For example, the description of Miss Havisham's room also describes her character: “I entered, therefore, and found myself in a pretty large room, well lighted with wax candles. No glimpse of daylight was to be seen in it. . .It was then I began to understand that everything in the room had stopped, like the watch and the clock, a long time ago" (ch. 8; 87-89).

Pathetic Fallacy and Magic. I walked away at a good pace, thinking it was easier to go than I had supposed it would be, and reflecting that it would never have done to have an old shoe thrown after the coach, in sight of all the High Street. 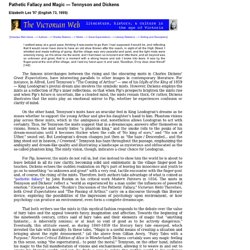 I whistled and made nothing of going. Social Entrapmant in<span class="book">Great Expectations</span> Throughout Great Expectations , Dickens utilizes the description of nature and weather in order to set a tone of oppression that often characterizes Pip's experiences. 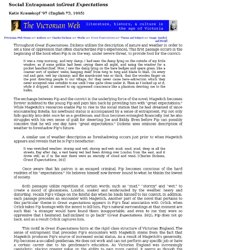 This first passage occurs in the beginning of the book when Pip is on the way, under severe threat, to provide food for the convict: It was a rimy morning, and very damp. I had seen the damp lying on the outside of my little window, as if some goblin had been crying there all night, and using the window for a pocket handkerchief. Now, I saw the damp lying on the bare hedges and spare grass, like a coarser sort of spiders' webs; hanging itself from twig to twig and blade to blad. On every rail and gate, wet lay clammy; and the marsh-mist was so thick, that the wooden finger on the post directing people to our village, for they never came here--adirection which they never accepted--was invisible to me until I was quite close under it.

Moving Up the Social Ladder: The Bottom Rung vs. The Top Rung. Ickens contrasts the life of a commoner to the life of a privileged individual in his novel Great Expectations . 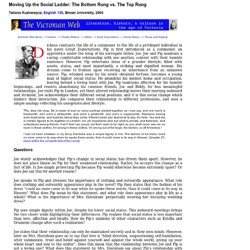 Pip is first introduced as a commoner, an apprentice under the wing of his surrogate father, Joe. Joe and Pip maintain a caring, comfortable relationship with one another, content with their humble existence. However, Pip entertains ideas of a grander lifestyle, filled with assets, status, and most importantly, a striking and dignified woman. His dreams come to fruition upon receiving an inheritance from an unknown source. Pip, whisked away by his newly obtained fortune, becomes a young man of higher social status.

"Pip, dear old chap, life is made of ever so many partings welded together, as I may say, and one man's a blacksmith, and one's a whitesmith, and one's a goldsmith, and one's a coppersmith. I had not been mistaken in my fancy that there was a simple dignity in him. Questions Joe wisely acknowledges that Pip's change in social status has driven them apart. Angels in the House?: Victorian Women in Great Expectations. He Victorian ideal of womanhood is the Angel in the House — a moral, yielding, domestic paragon. 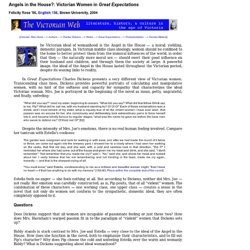 In Victorian middle class ideology, women should be confined to the home to better protect them from the immoral influences of the world, in order that they — the naturally more moral sex — should exert their good influence on their husband and children, and through them the society at large. A powerful image, the ideal of the Angel in the House lasted throughout the Victorian period, despite its waning links to reality. In Great Expectations Charles Dickens presents a very different view of Victorian women. Dreams in The Idylls and Great Expectations. King Leodogran's dream in “The Coming of Arthur" (1859) illustrates the notion of profound realization, disguised by something simple, as it relates to subjective decision making. 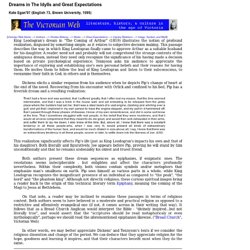 This passage describes the way in which King Leodogran finally came to approve Arthur as a suitable husband for his daughter. A reader need not and probably will not comprehend the strange contents of the ambiguous dream, instead they need only recognize the significance of his having made a decision based on private psychological experience. Tennyson asks his audience to appreciate the importance of exploring and establishing one's own personal beliefs and their reasons for having them. Subversion of Gender Identity in Great Expectations. In Great Expectations , Charles Dickens subverts stereotypical Victorian ideals of motherhood, femininity, and masculinity while concurrently maintaining his characters within the overarching strict framework of a gendered society in nineteenth-century England. 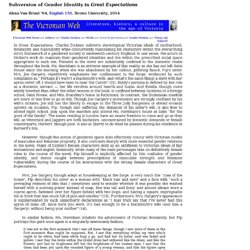 In one sense, the actors in Dicken's work do maintain their gendered identities and live within the prescribed social space appropriate to each sex. Females in the novel are indubitably confined to the domestic realm throughout the book. Ms. Havisham is an extreme example of this reality, as she has not left Satis House since the morning when she was abandoned by her callous, pilfering fiancé.