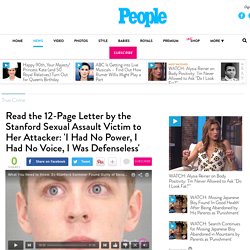 The sentence drew widespread criticism; prosecutors had asked Turner be sentenced to six years, according to CNN. Turner was convicted of three felony counts of sexual assault. Turner had admitted to the sexual contact but maintained it was consensual. Below is the 12-page victim impact statement written by the victim and read in court to Turner after his sentencing. The statement is printed in its entirety. Your Honor, if it is all right, for the majority of this statement I would like to address the defendant directly. You don't know me, but you've been inside me, and that's why we're here today.

On January 17th, 2015, it was a quiet Saturday night at home. Stanford Rape Case Reveals Troubling Privilege Bias, Creates National Outcry » Second Nexus. [DIGEST: The Guardian, Buzzfeed] A case out of Stanford University is garnering international attention not only for the crime itself, but its aftermath. 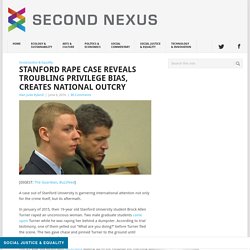 In January of 2015, then 19-year old Stanford University student Brock Allen Turner raped an unconscious woman. Two male graduate students came upon Turner while he was raping her behind a dumpster. According to trial testimony, one of them yelled out “What are you doing?” Before Turner fled the scene. The 23-year old victim later described waking up in the hospital the morning after the assault with no memory of what had transpired. Brock Allen Turner. A jury convicted Turner on three felony charges, including sexually penetrating an unconscious person with a foreign object. Dan Turner’s statement was widely condemned across social media as a reminder of rape culture and the epidemic of violence against women prevalent across college campuses. To read more, please continue to page 2. About The Author.

ACTIVITY 2 ECONOMIC JUSTICE: THE SCRAMBLE FOR WEALTH AND POWER. The distribution of wealth and power within society usually affects a person’s opportunities to achieve full human rights and live a life with dignity. 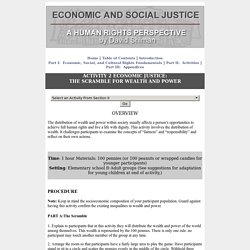 This activity involves the distribution of wealth. It challenges participants to examine the concepts of “fairness” and “responsibility” and reflect on their own actions. Note: Keep in mind the socioeconomic composition of your participant population. Guard against having this activity confirm the existing inequalities in wealth and power. What Saying 'I'm Not A Feminist' Really... - The Huffington Post. 6 Videos To Use In Your Social Justice Lessons. When I first started teaching in Los Angeles in the early 2000s, my third and fourth grade students organized a protest against a school-wide balloon release because they had just learned about the ways deflated balloons can harm marine life. 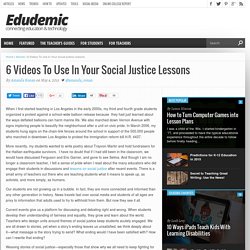 We also marched down Vernon Avenue with signs imploring people to beautify the neighborhood after a unit on civic pride. In March 2006, my students hung signs on the chain-link fences around the school in support of the 500,000 people who marched in downtown Los Angeles to protest the immigration reform bill H.R. 4437. Using Photographs to Teach Social Justice: Showcasing Your Understanding. Race, Class, Gender, Sexuality, and Other Social Justice Issues. Classroom Activities. Teaching Students to Stand Up and Speak Out.

If a student dropped to the linoleum floor hungry and ill, as a classroom community, we would come to her aid immediately. 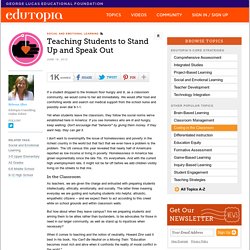 We would offer food and comforting words and search out medical support from the school nurse and possibly even dial 9-1-1. Yet when students leave the classroom, they follow the social norms we've established here in America: If you see homeless who are ill and hungry, keep walking. Don't encourage that "behavior" by giving them money. If they want help, they can get it. I don't want to oversimplify the issue of homelessness and poverty in the richest country in the world but that fact that we even have a problem is the problem. In the Classroom As teachers, we are given the charge and entrusted with preparing students intellectually, ethically, emotionally, and socially. But how about when they leave campus? Social Justice Lessons Consider any of these activities: Helpful Resources The Zinn Education Project offers resources to use with the Zinn's History book. LREI Eighth Grade Civil and Human Rights Activism Work.

Public Intellectuals Project. Orwell, Huxley and America’s Plunge into Authoritarianism by Henry A. 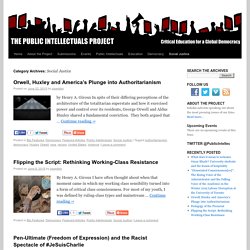 Giroux In spite of their differing perceptions of the architecture of the totalitarian superstate and how it exercised power and control over its residents, George Orwell and Aldus Huxley shared a fundamental conviction. They both argued that … Continue reading Posted in Big Featured, Democracy, Featured Articles, Public Intellectuals, Social Justice Tagged authoritarianism, democracy, Huxley, Orwell, race, racism, United States, violence Flipping the Script: Rethinking Working-Class Resistance By Henry A. Pen-Ultimate (Freedom of Expression) and the Racist Spectacle of #JeSuisCharlie. WarToysToPeaceArt. Addressing human rights in the wake of human tragedy.