Is Vaping Bad For You? Here Are the Negative Health Effects of Smoking From a Vape. As tech advancements have brought down the prices for many popular vaporizers, smokers are turning to e-cigarettes and other vapes as their primary smoking implements instead of the traditional tools. 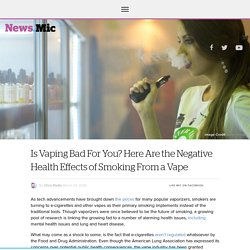 Though vaporizers were once believed to be the future of smoking, a growing pool of research is linking the growing fad to a number of alarming health issues, including mental health issues and lung and heart disease. What may come as a shock to some, is the fact that e-cigarettes aren't regulated whatsoever by the Food and Drug Administration. Even though the American Lung Association has expressed its concerns over potential public health consequences, the vape industry has been granted absolute freedom in packaging as many chemicals as it pleases into its devices' cartridges. 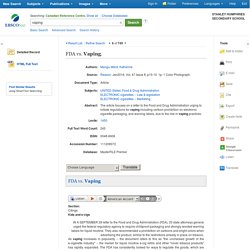 They also recommended a prohibition on cartoons and bright colors when advertising the product, similar to the restrictions already in place on tobacco. Vaping Information. Know your Facts about Electronic Cigarettes. E-cigarettes good or bad? New study finds vaping is not a better alternative to tobacco smoking. Flickr/Vaping360 When using electronic cigarettes, people are under the impression that they are not causing harm to their health. 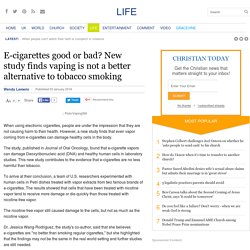 However, a new study finds that even vapor coming from e-cigarettes can damage healthy cells in the body. The study, published in Journal of Oral Oncology, found that e-cigarette vapors can damage Deoxyribonucleic acid (DNA) and healthy human cells in laboratory studies. So your teenager is vaping e-cigarettes – should you worry? E-Cigarettes Marketed to Youths, Federal Lawmakers Say in Report: Teacher Resources. Www.edweek.org/go/blogs Manufacturers are stepping up efforts to market electronic cigarettes to children and teens, says a report released this month by 11 Democrats in Congress. 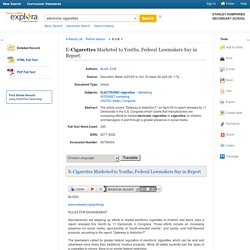 Those efforts include an increasing presence on social media, sponsorship of "youth-oriented events," and candy- and fruit-flavored products, according to the report, "Gateway to Addiction? " The lawmakers called for greater federal regulation of electronic cigarettes, which can be sold and advertised more freely than traditional nicotine products. It’s Really Easy for Teens to Buy E-Cigs Online: EBSCOhost. Most popular e-cigarette sites fail to verify the age of their clients, finds a new study photo-color: Elizabeth Renstrom for TIME Young people under age 18 can buy e-cigarettes online, even in states where it’s illegal, a new study shows. 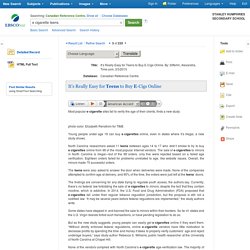 North Carolina researchers asked 11 teens between ages 14 to 17 who didn’t smoke to try to buy e-cigarettes online from 98 of the most popular Internet vendors. The sale of e-cigarettes to minors in North Carolina is illegal—but of the 98 orders, only five were rejected based on a failed age verification. Eighteen orders failed for problems unrelated to age, like website issues. The teens were also asked to answer the door when deliveries were made. The findings are concerning for any state trying to regulate youth access, the authors say. Some states have stepped in and banned the sale to minors within their borders. Emerging Health Risks Of 'E-Cigarettes'.: EBSCOhost. Ban-on-e-cigarettes-in-nyc-parks-and-restaurants-comes-into-effect. California Says E-Cigarettes a Health Risk: EBSCOhost.

Bosses urged to let staff vape at work: EBSCOhost. Section: News Edition: 01 Bosses should consider allowing their employees to vape at their desks, campaigners have said. 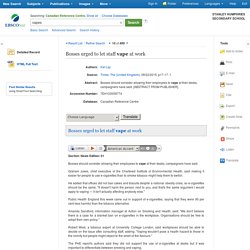 Graham Jukes, chief executive of the Chartered Institute of Environmental Health, said making it easier for people to use e-cigarettes than to smoke tobacco might help them to switch. He added that offices did not ban cakes and biscuits despite a national obesity crisis, so e-cigarettes should be the same. "It doesn't harm the person next to you, and that's the same argument I would apply to vaping — it isn't actually affecting anybody else.

" 10 Things I Vape About You: EBSCOhost. Section: After years of medical community outcry and government anti-smoking campaigning, cigarette use among teenagers appears to be approaching a nadir. 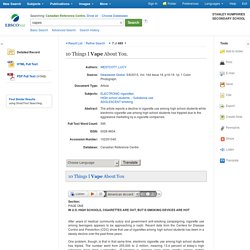 Recent data from the Centers for Disease Control and Prevention (CDC) show that use of cigarettes among high school students has been in a steady decline over the past three years. One problem, though, is that in that same time, electronic cigarette use among high school students has tripled. The number went from 255,000 to 2 million, meaning 13.4 percent of today’s high schoolers have tried e-cigarettes. New law draws fire from vape vendor: EBSCOhost.

Legislation might forbid stores to demonstrate how e-cigarettes work New provincial legislation regarding the sale and promotion of e-cigarettes may undermine a recently established Guelph business operating as a vapour lounge and retail outlet for the devices. 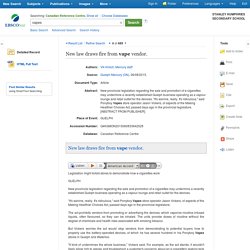 "It's asinine, really. It's ridiculous," said Ponyboy Vapes store operator Jason Vickers, of aspects of the Making Healthier Choices Act, passed days ago in the provincial legislature. The act prohibits vendors from promoting or advertising the devices, which vaporize nicotine-infused liquids, often flavoured, so they can be inhaled. The units provide doses of nicotine without the degree of chemicals and health risks associated with smoking tobacco. But Vickers worries the act would stop vendors from demonstrating to potential buyers how to properly use the battery-operated devices, of which he has several hundred in his Ponyboy Vapes stores in Guelph and Waterloo. "It kind of undermines the whole business," Vickers said. Vaping may harm the lungs. You’ve seen them on television, in celebrity photos and in magazine ads — cool superstars vaping on electronic cigarettes. 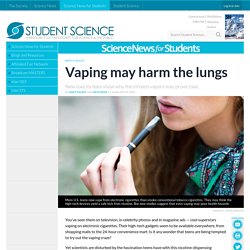 Their high-tech gadgets seem to be available everywhere, from shopping malls to the 24-hour convenience mart. Is it any wonder that teens are being tempted to try out the vaping craze? Yet scientists are disturbed by the fascination teens have with this nicotine-dispensing alternative to smoking. And with good reason. The Dirty Truth About E-Cigs. Vaping: More Dangerous Than You Think. He Was Taking a Break & Went to Make a Sandwich. Then He Felt a ‘Fountain of Fire’ in His Pocket…

PGRpdiBjbGFzcz0ibWlkX2FydGljbGUgIiBpZD0ibWdhLWFkLWNvbnRlbnRfbWlkX2FydGljbGUiID48ZGl2IGNsYXNzPSJwdWJuYXRpb24gY3VzdG9tIiBkYXRhLXRhcmdldD0idGJ4MDEiIHN0eWxlPSJ2aXNpYmlsaXR5OiBoaWRkZW47Ij5yZXBvcnQgdGhpcyBhZDwvZGl2Pgo8IS0tIFRhYm9vbGFYIE5lZWRzIFRoaXMgSGVyZSAtLT4KPC9kaXY+ In an effort to quit smoking, Garrett Preston turned to a popular trend to curb his cravings for a cigarette. 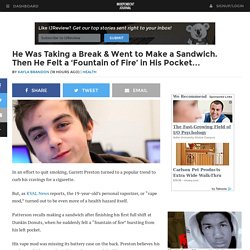 But, as KVAL News reports, the 19-year-old’s personal vaporizer, or “vape mod,” turned out to be even more of a health hazard itself. Patterson recalls making a sandwich after finishing his first full shift at Dunkin Donuts, when he suddenly felt a “fountain of fire” bursting from his left pocket. His vape mod was missing its battery case on the back. Preston believes his car keys, which were also in his pocket, created the blaze. Image Credit: Garrett Preston (Courtesy of KVAL News) The teen immediately ripped off his burning pants, causing the smoking vaporizor to fall to the ground. A 2014 study by the U.S. Advocates of vapor cigarettes tout their benefits. Former smokers in the Waterville area say 'They're a million times better than tobacco.' WATERVILLE — Steven Clark started smoking cigarettes at 18, but only in social situations when others would light up. As time went on, however, he began smoking regularly and like many others became addicted. Cigarettes aren’t cheap at $6 to $8 a pack.

One day Clark, now 25, did the math. He figured he was spending about $100 a week— or about $4,800 a year — on the unhealthful, dirty habit. Clark, of Winslow, vowed to kick the habit. Then he stepped into Empire Vape Shop on Main Street and got set up with an electronic cigarette or “mod.” For the first time, he found a method for quitting smoking that really worked, he said. Chemical flavorings found in e-cigarettes linked to lung disease. Diacetyl, a flavoring chemical linked to cases of severe respiratory disease, was found in more than 75 percent of flavored electronic cigarettes and refill liquids tested by researchers at Harvard T.H.

Chan School of Public Health. Two other related, potentially harmful compounds were also found in many of the tested flavors, which included varieties with potential appeal to young people such as cotton candy, “Fruit Squirts,” and cupcake. The study was published online today in Environmental Health Perspectives. The Occupational Safety and Health Administration and the flavoring industry have warned workers about diacetyl because of the association between inhaling the chemical and the debilitating respiratory disease bronchiolitis obliterans, colloquially known as “popcorn lung” because it first appeared in workers who inhaled artificial butter flavor in microwave popcorn processing facilities. At least one of the three chemicals was detected in 47 of the 51 flavors tested. Vaping may not be as safe as smokers think, research suggests. E-cigarettes generate toxic chemicals similar to those found in tobacco and may harm the lungs and immune system, new research suggests.

The findings, from a study of mice, indicate that vaping may not be as safe an alternative to smoking tobacco as many people believe.