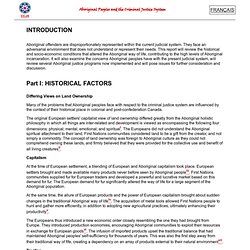 They face an adversarial environment that does not understand or represent their needs. This report will review the historical and socio-econornic conditions that altered the Aboriginal way of life, contributing to the high levels of Aboriginal incarceration. It will also examine the concerns Aboriginal peoples have with the present judicial system, will review several Aboriginal justice programs now implemented and will pose issues for further consideration and discussion.

Part I: HISTORICAL FACTORS Differing Views on Land Ownership. Centre for Social Justice. Overview: Struggling to Escape a Legacy of Oppression Aboriginal people have a long and proud history that includes rich cultural and spiritual traditions. 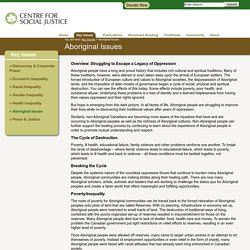 Many of these traditions, however, were altered or even taken away upon the arrival of European settlers. The forced introduction of European culture and values to Aboriginal societies, the dispossession of Aboriginal lands, and the imposition of alien modes of governance began a cycle of social, physical and spiritual destruction. You can see the effects of this today. Some effects include poverty, poor health, and substance abuse. But hope is emerging from this dark picture. Similarly, non-Aboriginal Canadians are becoming more aware of the injustices that have and are occurring to Aboriginal peoples as well as the richness of Aboriginal cultures. The Cycle of Destruction Poverty, ill health, educational failure, family violence and other problems reinforce one another. 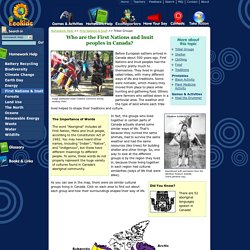 Before European settlers arrived in Canada about 500 years ago, First Nations and Inuit peoples had the country pretty much to themselves. They lived in groups called tribes, with many different ways of life and traditions. Some were nomadic, which means they moved from place to place while hunting and gathering food. Others were farmers who settled down in a particular area. The weather and the type of land where each tribe lived helped to shape their traditions and culture.

Reproduced with permission from the Glenbow Museum website (www.glenbow.org). First Nation Information Project - FNIP. In our research for information on the Internet in relation to First Nations, we have found that the search results for economic development, community planning, self-government, education, etc., that may be focused on First Nation communities can be difficult to find. 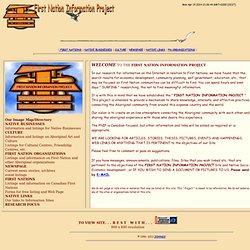 You can spend hours and even days " SURFING " researching, the net to find meaningful information. It is with this in mind that we have established the " FIRST NATION INFORMATION PROJECT ". This project is intended to provide a mechanism to share knowledge, interests, and effective practices connecting the Aboriginal community from around this expanse country and the world. Our vision is to create an on-line atmosphere connecting the Aboriginal community with each other and sharing the aboriginal experience with those who desire this experience. 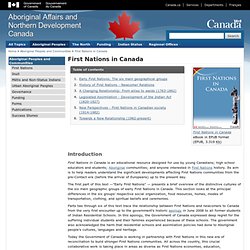 Its aim is to help readers understand the significant developments affecting First Nations communities from the pre-Contact era (before the arrival of Europeans) up to the present day. The first part of this text —"Early First Nations" — presents a brief overview of the distinctive cultures of the six main geographic groups of early First Nations in Canada. This section looks at the principal differences in the six groups' respective social organization, food resources, homes, modes of transportation, clothing, and spiritual beliefs and ceremonies. Canada in the Making - Aboriginals: Treaties & Relations. Before the discovery of North America by European explorers, Aboriginal peoples had an entire continent to themselves. 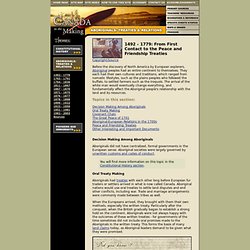 They each had their own cultures and traditions, which ranged from nomadic lifestyles, such as the plains peoples who followed the buffalo, to settled farmers such as the Iroquois. The arrival of the white man would eventually change everything, and fundamentally affect the Aboriginal people's relationship with the land and its resources. Decision Making Among Aboriginals Oral Treaty Making Covenant Chain The Great Peace of 1701 Aboriginal-European Relations in the 1700s Peace and Friendship Treaties Other Interesting and Important Documents Decision Making Among Aboriginals Aboriginals did not have centralized, formal governments in the European sense. Welcome to the First Nation Profiles Interactive Map.