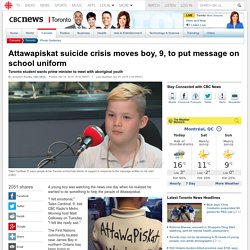 Cardinal and his mother came up with the idea to put a note on his school uniform to get people talking about the situation on the reserve. (Metro Morning/CBC) "I felt emotional," Talan Cardinal, 9, told CBC Radio's Metro Morning host Matt Galloway on Tuesday. "I felt like really sad. " The First Nations community located near James Bay in northern Ontario has been trying to cope with multiple suicide attempts in recent weeks, particularly involving young people. Attawapiskat reserve life: $22 for a 12-pack of pop. For a few cold months, the only ground transportation into and out of the small remote reserve of Attawapiskat is the James Bay Winter Road, a 300-kilometre stretch of thick, crafted ice that winds its way south to Moosonee. 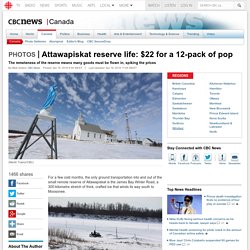 (Martin Trainor/CBC) Access by air. #OccupyINAC Vancouver continues to protest in solidarity with Attawapiskat. Like this article? 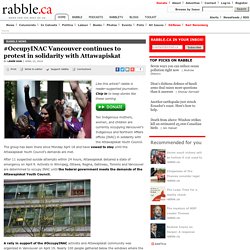 Rabble is reader-supported journalism. Chip in to keep stories like these coming. Ten Indigenous mothers, women, and children are currently occupying Vancouver's Indigenous and Northern Affairs offices (INAC) in solidarity with the Attawapiskat Youth Council. The group has been there since Monday April 18 and have vowed to stay until the Attawapiskat Youth Council's demands are met. After 11 suspected suicide attempts within 24 hours, Attawapiskat delcared a state of emergency on April 9. 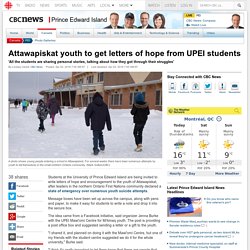 Message boxes have been set up across the campus, along with pens and paper, to make it easy for students to write a note and drop it into the secure box. The idea came from a Facebook initiative, said organizer Jenna Burke with the UPEI Mawi'omi Centre for Mi'kmaq youth. The post is providing a post office box and suggested sending a letter or a gift to the youth. "I shared it, and planned on doing it with the Mawi'omi Centre, but one of my friends with the student centre suggested we do it for the whole university," Burke said. "I think it's really important to let them know that there are people that care about them. Since that time, Burke said she feels not a lot has been done to help the community until recently. Attawapiskat shacks put First Nations housing crisis into perspective. 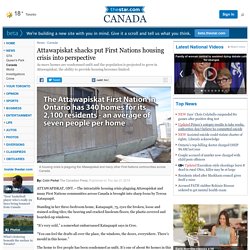 —The intractable housing crisis plaguing Attawapiskat and many First Nations communities across Canada is brought into sharp focus by Teresa Kataquapit. Standing in her three-bedroom home, Kataquapit, 75, eyes the broken, loose and stained ceiling tiles; the heaving and cracked linoleum floors; the plastic-covered and boarded-up windows. The young people of Attawapiskat have a message for us – iPolitics. Anyone hearing the news last Friday of five more young people attempting suicide in Attawapiskat could be forgiven for dwelling on the apparent hopelessness of the situation. 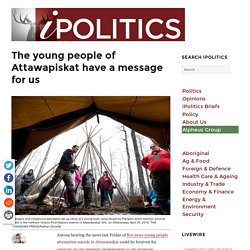 I’m here to tell you the situation is not hopeless. The kids in this remote northern Ontario First Nation haven’t given up, as Indigenous and Northern Affairs Minister Carolyn Bennett learned during her recent visit. The young people of Attawapiskat have something to say, if we’re willing to listen. That should give us all hope. Lack of money not Attawapiskat’s problem. ATTAWAPISKAT - Let’s be clear, what’s going on in the Northern Ontario First Nation of Attawapiskat is awful — the attempted suicides, the suicide pacts, the decrepit housing and foul water, the chronic unemployment, substance abuse and general despair. 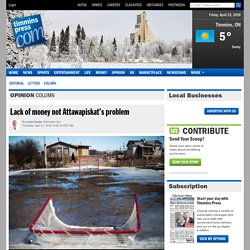 But let’s be equally clear: a legion of government social workers flown in from down south, visits by consoling cabinet ministers, emergency Parliamentary debates and a few barge loads more of taxpayer dollars aren’t going to make an ounce of difference. Because the problem is neither lack of government nor lack of other people’s money. When we see images of the squalid homes in Attawapiskat (or scores of other northern reserves) and hear about how residents use buckets as toilets because their towns lack water and sewers, we wonder how such Third World conditions can occur in a First World country such as Canada.

It’s only natural, then, to conclude First Nations are being starved for funds by Ottawa or the provinces. Attawapiskat youth urges Canada to 'open its eyes' to First Nations communities - Sudbury. A young man in the troubled First Nation of Attawapiskat asked the federal indigenous affairs minister on Monday why his community was living in Third World conditions while Canada is greeting refugees with open arms. 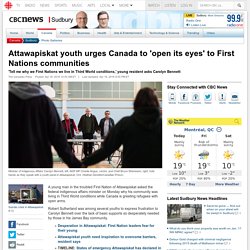 Robert Sutherland was among several youths to express frustration to Carolyn Bennett over the lack of basic supports so desperately needed by those in his James Bay community. "Tell me why we First Nations we live in Third World conditions," he said during a meeting with Bennett and other officials. "Why is it so easy for the government to welcome refugees and offer them first-class citizenship in our country? When will Canada wake up and open its eyes to First Nations communities? " Attawapiskat: Pictures, Videos, Breaking News. Jean Chrétien, St. Anne’s and the ‘straight highway’ to Attawapiskat’s suicide crisis. Jorge Barrera APTN National News In 1968, when Jean Chrétien was Indian Affairs minister, he received a hand-written letter raising concerns about the “prejudicial” treatment of First Nation children at St. 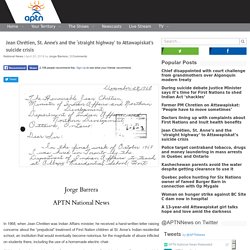 Anne’s Indian residential school, an institution that would eventually become notorious for the magnitude of abuse inflicted on students there, including the use of a homemade electric chair. Children from Attawapiskat, the Cree community along Ontario’s James Bay coast, which Chrétien suggested last week should consider relocation, attended St. 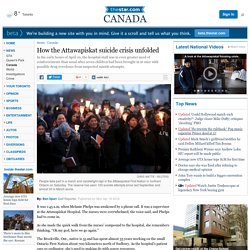 Housing pressure squeezes Attawapiskat community ever harder. ATTAWAPISKAT, Ont. -- The intractable housing crisis plaguing Attawapiskat and many First Nations communities across Canada is brought into sharp focus by Teresa Kataquapit. Standing in her three-bedroom home, Kataquapit, 75, eyes the broken, loose and stained ceiling tiles; the heaving and cracked linoleum floors; the plastic-covered and boarded-up windows. "It's very cold," a somewhat embarrassed Kataquapit says in Cree. "You can feel the drafts all over the place, the windows, the doors, everywhere. There's mould in this house. " The home to five people has been condemned as unfit. Yet like many other indigenous Canadians living on First Nations, Kataquapit continues to reside in a structure heated by a single woodstove. "I was promised a house twice by the former chiefs," she says.

Her grandson, Frankie Kataquapit, 26, who works at the DeBeers diamond mine 90 kilometres away, says he wishes he could live in something better "every day. " "I don't blame anybody," she says.