The Trump Administration's White-Nationalist Pipeline. Surest Way to Face Marijuana Charges in New York: Be Black or Hispanic. Why America’s Black Mothers and Babies Are in a Life-or-Death Crisis. 50 years after Martin Luther King’s death, the US is far from his dream. Exactly 50 years after the murder of Martin Luther King Jr., America is still far from his dream. Across measures ranging from criminal justice issues to economic well-being, black Americans still lag far behind white Americans. In some cases, there has been progress since the civil rights era and King’s death.

But the situation has actually gotten worse for many black people. There are myriad reasons for this. Outright racism. Whatever the cause, the result is seen in the numbers below: From earnings to getting a college education to incarceration, black Americans generally do worse than their white peers. 1) Black Americans make much less money than their white peers It’s not just that black people generally make less money than their white counterparts; it’s that the wage gap between black and white workers has widened steadily since the late 1970s. 2) Black people are still unemployed at nearly twice the rates as white people How bad is the job market?

Psmag. For people of color, banks are shutting the door to homeownership. Donald Trump Is the First White President - The Atlantic. Even With Affirmative Action, Blacks and Hispanics Are More Underrepresented at Top Colleges Than 35 Years Ago - The New York Times.

The number of Hispanic and black freshmen on the University of California campuses declined immediately after California’s affirmative action ban took effect, especially at the most sought-after campuses, said Stephen Handel, associate vice president for undergraduate admissions. The system put the ban in place in 1998. Even now, both Hispanics and blacks are least represented at Berkeley, the most selective campus. On seven campuses, Hispanics now make up a quarter or more of the freshmen, but that’s still far below their share of the college-age population in the state, which is close to 50 percent.

White Evangelicals Say They Face More Discrimination Than Muslims - The Atlantic. In February, pollsters at the Public Religion Research Institute asked Americans about their impressions of discrimination in the United States. 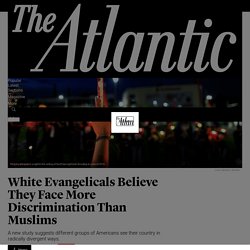 Two religious groups were included on the list of those who might face bias: Christians and Muslims. Depending on who was answering, the responses were wildly different. Overall, people were twice as likely to say Muslims face discrimination as they were to say the same thing about Christians. Democrats were four times more likely to see Muslim vs. Christian discrimination, and non-religious people more than three. Race gaps in SAT math scores are as big as ever. Education has long been cast as the “great equalizer” of American society. 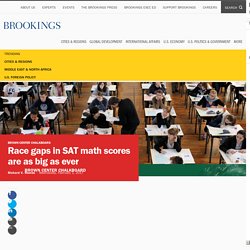 Post-secondary colleges, and in particular public universities, are especially prized as engines of upward mobility. As recent research by Raj Chetty, John Friedman, Emmanuel Saez, Nicholas Turner, and Danny Yagan shows, some institutions are more effective in this regard than others. The new Chetty et al. study provides a treasure trove for further research. RACE - The Power of an Illusion . Background Readings. A Long History of Racial Preferences - For Whites Many middle-class white people, especially those of us who grew up in the suburbs, like to think that we got to where we are today by virtue of our merit - hard work, intelligence, pluck, and maybe a little luck. 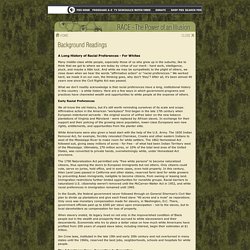 And while we may be sympathetic to the plight of others, we close down when we hear the words "affirmative action" or "racial preferences. " We worked hard, we made it on our own, the thinking goes, why don't 'they'? After all, it's been almost 40 years now since the Civil Rights Act was passed. White America is quietly self-segregating. There's a small town in Minnesota called Worthington. 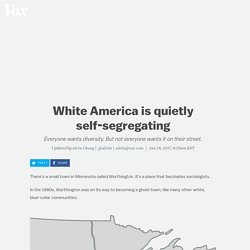 Why America is Self-Segregating – Data & Society: Points. The United States has always been a diverse but segregated country. 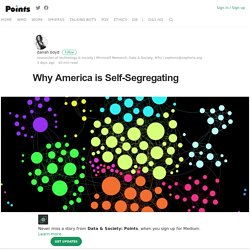 This has shaped American politics profoundly. Yet, throughout history, Americans have had to grapple with divergent views and opinions, political ideologies, and experiences in order to function as a country. Many of the institutions that underpin American democracy force people in the United States to encounter difference. President Obama's Faith in White America is Misguided - The Atlantic. Over the next few weeks, The Atlantic will be publishing a series of responses to Ta-Nehisi Coates’s story "My President Was Black. 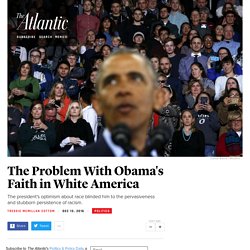 " Readers are invited to send their own responses to hello@theatlantic.com, and we will post a sample of your feedback. You can read other responses to the story from Atlantic readers and contributors here. I screamed a lot while reading Ta-Nehisi Coates’s My President Was Black. When I was done reading and screaming, I cried. Donald Trump’s long history of racism, from the 1970s to 2016, explained. It’s been said again and again throughout the 2016 campaign: Donald Trump is a racist. 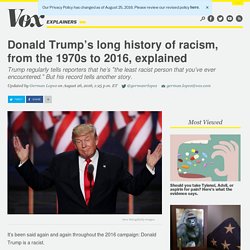 Minorities Suffer From Unequal Pain Treatment. This Video of Hillary Clinton Answering 40 Years of Sexist Questions Is Infuriating. The truth about the gender wage gap. Nearly 10,000 people graduated with MBAs from University of Chicago’s Booth School of Business between 1990 and 2006. 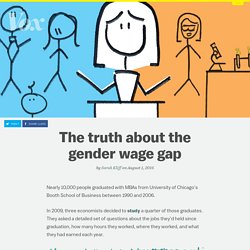 In 2009, three economists decided to study a quarter of those graduates. Surprising New Evidence Shows Bias in Police Use of Force but Not in Shootings. Striking Aerial Drone Photos Show how Apartheid Still Shapes South African Cities. Johnny Miller was just starting out as a photographer in Seattle in 2011 when he won a Rotary Ambassadorial Scholarship that took him to Cape Town, South Africa—a country that, like his own, has a long history of institutional racism and segregation. 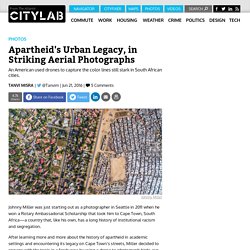 The Civil Rights Problem In U.S. Schools: 10 New Numbers : NPR Ed. It's a rare and remarkable view into America's public schools and the challenges that continue some 60 years after Brown v. 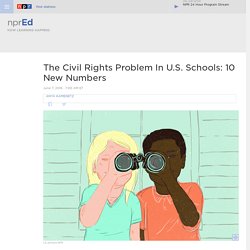 Board of Education: The Civil Rights Data Collection survey. Since 1968, the federal government has been sending it to the nation's schools to gauge educational access and enforce civil rights law. Today, the U.S. Education Department released its 2013-2014 CRDC results, covering more than 95,000 schools and 50 million students. Living in a poor neighborhood changes everything about your life. In 1940, a white developer wanted to build a neighborhood in Detroit. So he asked the US Federal Housing Administration to back a loan. The FHA, which was created just six years earlier to help middle-class families buy homes, said no because the development was too close to an "inharmonious" racial group. Meaning black people. White women benefit most from affirmative action — and are among its fiercest opponents.

The University of Texas Austin was Abigail Fisher's dream school. Fisher, from Sugar Land, Texas, a wealthy Houston suburb, earned a 3.59 GPA in high school and scored an 1180 on the SATs. Not bad, but not enough for the highly selective UT Austin in fall 2008; Fisher's dreams were dashed when she was denied admission. The ‘Resume Check’: On Gay Talese, Racism and Sexism in the Press Room by Toure — One Great Graf.

If There’s Only One Woman in Your Candidate Pool, There’s Statistically No Chance She’ll Be Hired. The Most Prejudiced Places in America. Nearly 20 percent of Trump’s supporters disapprove of Lincoln freeing the slaves. New bills reveal a stubborn resistance to marriage equality. Mark Wilson/Getty Images. The remarkably different answers men and women give when asked who’s the smartest in the class. This Poll Of South Carolina Republicans Is Terrifying. Islamophobia. Why white people see black boys like Tamir Rice as older, bigger and guiltier than they really are. This undated photo provided by the family's attorney shows Tamir Rice, 12.

(AP Photo/Courtesy Richardson & Kucharski Co., L.P.A.) On Monday, a grand jury in Cleveland declined to bring criminal charges against the two police officers involved in the fatal shooting of 12-year-old Tamir Rice last November. In 2015, The Dark Forces Of The Internet Became A Counterculture. The Worst Islamophobia Of 2015 (VIDEO) Fleeing from terror and indiscriminate violence in parts of the Middle East, millions of people have packed up and left their homes to start safer lives for themselves and their families elsewhere.

1.5 Million Missing Black Men. Watch the spread of mass incarceration throughout the US. The Ferguson Report. History of Lynchings in the South Documents Nearly 4,000 Names. Study: White people see "black" Americans as less competent than "African Americans" Why So Many Rappers Have Been Silent About #BlackLivesMatter. The great American rip-off: How big-money corruption fuels racial inequality. Ferguson isn’t about black rage against cops. It’s white rage against progress. Why it's so rare for police to be prosecuted for killing civilians, explained in 2 minutes. Across America, whites are biased and they don’t even know it. The median wealth for whites in the US is nearly $142,000. For blacks, it's $11,000. ‘Racism without racists’: White supremacy so deeply American that we don’t even see it.

Chris Rock: It's not black people who have progressed. It's white people. The Case for Reparations.