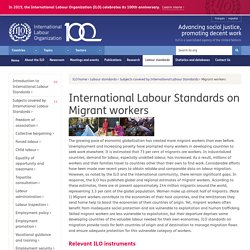 Unemployment and increasing poverty have prompted many workers in developing countries to seek work elsewhere. It is estimated that 73 per cent of migrants are workers. In industrialized countries, demand for labour, especially unskilled labour, has increased. As a result, millions of workers and their families travel to countries other than their own to find work. Considerable efforts have been made over recent years to obtain reliable and comparable data on labour migration.

Migration for Employment Convention (Revised), 1949 (No. 97) - [ratifications ] Requires ratifying states to facilitate international migration for employment by establishing and maintaining a free assistance and information service for migrant workers and taking measures against misleading propaganda relating to emigration and immigration. : Migrant Workers. Human Rights and Migrant Workers What are the Human Rights of Migrant Workers? 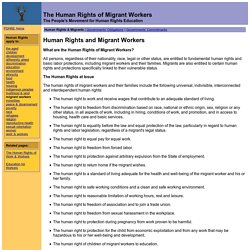 All persons, regardless of their nationality, race, legal or other status, are entitled to fundamental human rights and basic labor protections, including migrant workers and their families. Migrants are also entitled to certain human rights and protections specifically linked to their vulnerable status. The Human Rights at Issue. Who is a migrant? IOM Definition of “Migrant” An umbrella term, not defined under international law, reflecting the common lay understanding of a person who moves away from his or her place of usual residence, whether within a country or across an international border, temporarily or permanently, and for a variety of reasons. 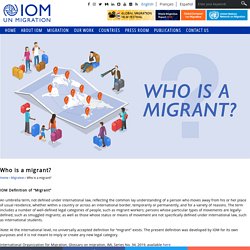 The term includes a number of well-defined legal categories of people, such as migrant workers; persons whose particular types of movements are legally-defined, such as smuggled migrants; as well as those whose status or means of movement are not specifically defined under international law, such as international students. Note: At the international level, no universally accepted definition for “migrant” exists. The present definition was developed by IOM for its own purposes and it is not meant to imply or create any new legal category. 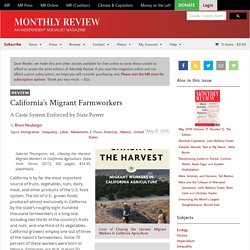 California is by far the most important source of fruits, vegetables, nuts, dairy, meat, and other products of the U.S. food system. The list of U.S.- grown foods produced almost exclusively in California by the state’s roughly eight hundred thousand farmworkers is a long one, including two thirds of the country’s fruits and nuts, and one third of its vegetables. California growers employ one out of three of the nation’s farmworkers. Some 70 percent of these workers were born in Mexico. Estimates are that at least 50 percent are undocumented, with little chance of changing that. Telling the Stories “No one comes out here. That is the thread that binds the seventeen people whose narratives are found in Chasing the Harvest—all have worked or are still working in California’s fields. Here is a taste: “In the fields they never had bathrooms. Changing Eras. The true conditions of farm workers today. Just after arriving from Mexico, a Mixtec farm worker lives with her son in a tent on the hillside in Del Mar. | Copyright David Bacon, used with permission At the end of the 1970s, California farm workers were the highest-paid in the U.S., with the possible exception of Hawaii’s long-unionized sugar and pineapple workers. 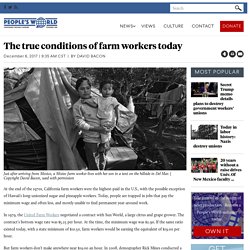 Today, people are trapped in jobs that pay the minimum wage and often less, and mostly unable to find permanent year-around work. In 1979, the United Farm Workers negotiated a contract with Sun World, a large citrus and grape grower. The contract’s bottom wage rate was $5.25 per hour. States Struggle to Provide Housing for Migrant Farmworkers. Farm Worker Issues. Farm workers are among the poorest workers in this country. 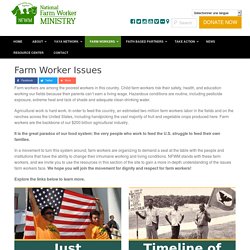 Child farm workers risk their safety, health, and education working our fields because their parents can’t earn a living wage. Hazardous conditions are routine, including pesticide exposure, extreme heat and lack of shade and adequate clean drinking water. Agricultural work is hard work. In order to feed the country, an estimated two million farm workers labor in the fields and on the ranches across the United States, including handpicking the vast majority of fruit and vegetable crops produced here.

Farm workers are the backbone of our $200 billion agricultural industry. It is the great paradox of our food system: the very people who work to feed the U.S. struggle to feed their own families. United States Farmworker Factsheet. Farmworkers are some of our nation’s most vital workers, as their labor enables us to enjoy high quality, low-cost, fresh fruits and vegetables all year round. 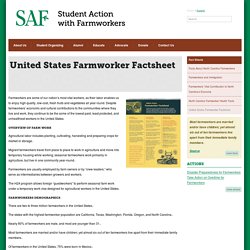 Despite farmworkers’ economic and cultural contributions to the communities where they live and work, they continue to be the some of the lowest paid, least protected, and unhealthiest workers in the United States. Overview of Farm Work Agricultural labor includes planting, cultivating, harvesting and preparing crops for market or storage.1 Migrant farmworkers travel from place to place to work in agriculture and move into temporary housing while working; seasonal farmworkers work primarily in agriculture, but live in one community year-round.1 Farmworkers are usually employed by farm owners or by “crew leaders,” who serve as intermediaries between growers and workers.

The H2A program allows foreign “guestworkers” to perform seasonal farm work under a temporary work visa designed for agricultural workers in the United States. Sources: Fs facts about ag workers 2018. International Organization for Migration. When The U.S. Government Tried To Replace Migrant Farmworkers With High Schoolers : The Salt : NPR. Women Migrant Workers in the US. We usually imagine migrant workers as young men who travel abroad to find jobs in agriculture, construction or restaurants. 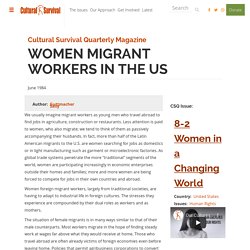 Less attention is paid to women, who also migrate; we tend to think of them as passively accompanying their husbands. In fact, more than half of the Latin American migrants to the U.S. are women searching for jobs as domestics or in light manufacturing such as garment or microelectronic factories. As global trade systems penetrate the more "traditional" segments of the world, women are participating increasingly in economic enterprises outside their homes and families; more and more women are being forced to compete for jobs in their own countries and abroad. Women foreign migrant workers, largely from traditional societies, are having to adapt to industrial life in foreign cultures. The stresses they experience are compounded by their dual roles as workers and as mothers.

The situation of female migrants is in many ways similar to that of their male counterparts. The Migrant / Seasonal Farmworker. Definitions and Overview A migrant farmworker is defined as an individual who is required to be absent from a permanent place of residence for the purpose of seeking remunerated employment in agricultural work. 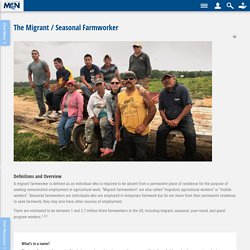 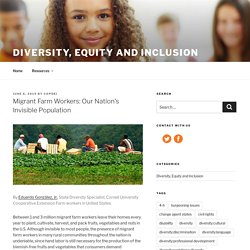 Although invisible to most people, the presence of migrant farm workers in many rural communities throughout the nation is undeniable, since hand labor is still necessary for the production of the blemish-free fruits and vegetables that consumers demand Who are Migrant Farm workers? Migrant farm workers are predominantly Mexican-born sons, husbands, and fathers who leave what is familiar and comfortable with the hopes and dreams of making enough money to support their families back home; feed themselves; purchase land and a home; and – like many immigrants who came before them – ultimately return to their homeland.

Why Do They Come Immigration Status The Changing Face of Immigrants Sources Photo by bobjagendorf / CC BY.