Shepard Fairey’s mural pays tribute to The Purple Rain Protest – Between 10 and 5. Our country’s history has shaped the rise of Johannesburg’s street art, the inner city is filled with artworks that commentate on our cultural zeitgeist. 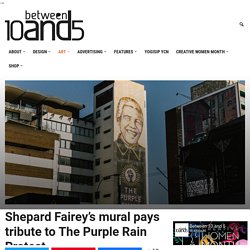 We have seen a growing number of artworks over the years and decided to put together an art series which concerns itself with the history and artists behind some of Johannesburg’s street art. In the fourth instalment of our series, we focus on Shepard Fairey’s work. The American artist, activist and founder of OBEY Clothing is the brains behind the ‘The Purple Shall Govern’ mural. If you have ever been to Braamfontein, you may be familiar with this mural, it resides in the heart of Johannesburg as you approach the Nelson Mandela Bridge.

Coincidentally, Nelson Mandela is amplified on this mural. How did it come about? Behind The Scenes with William Kentridge at the Zeitz M0CAA. William Kentridge retrospective: Africa′s largest modern art museum goes beyond identity politics. When you walk into the Zeitz Museum of Contemporary African Art (Zeitz MOCAA) in Cape Town, it feels like you're entering a sacred space. 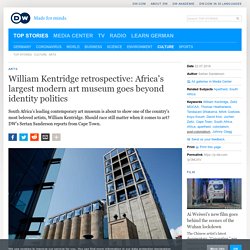 What used to be a 57-meter-high grain silo storing maize, wheat and similar crops now inspires the kind of awe you might only experience by visiting a temple or a cathedral, as larger-than-life art installations in the entrance hall greet visitors. But since the opening of the Zeitz MOCAA in September 2017, some African artists and curators have questioned the choice of opening a museum that celebrates African art in Cape Town — without doubt the most "European" metropolis of the entire continent. Located at the city's touristy Victoria & Alfred Waterfront and originally built in 1921, the grain silo was transformed into a museum by the London-based British architect Thomas Heatherwick — and not an African one. 'Kentridge reflects Africa's complex histories' Assistant curator Tandazani Dhlakama says that art has to speak for itself.

William Kentridge: the barbarity of the 'Great War' told through an African lens. Produced towards the end of the four-year celebrations of the centenary of the “Great War” of 1914-18, the dramatic art performance of South African-born artist William Kentridge – “The Head & the Load” –explodes the traditional understanding of this conflict as a “World War”. 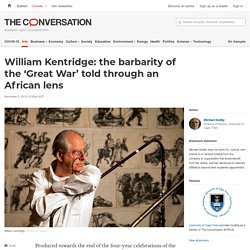 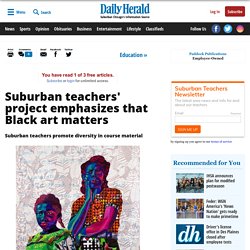 Called Black Creatives Matter, the project is an ever-expanding digital document featuring information about more than 500 artists, as well as anti-racist resources. Jonathan Pruc, a visual art and photography teacher at Mundelein High School, founded the initiative with Deanna Sortino, a visual art teacher at Niles West High in Skokie. "While some schools are making diversity inclusion a school goal, we knew a grass-roots, for-teacher-by-teacher resource would (have) the most impact for educators," Pruc said. Other participants include Cristal Sabbagh, an art teacher at Lincolnshire's Stevenson High, and Nick Hostert, an art teacher at Palatine High. "As teachers, it's imperative for us to be intentional in designing curricula that is truly representational of our contemporary world," Hostert said. Telstra National Aboriginal & Torres Strait Islander Art Awards (NATSIAA) Mary Sibande: I Came Apart at the Seams. John Prince Siddon: All Mixed Up - Fremantle Arts Centre.

All Mixed Up is a major solo exhibition featuring newly commissioned paintings, sculpture and installation from John Prince Siddon. 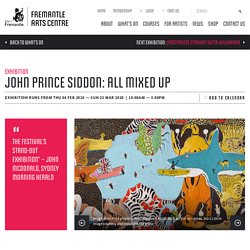 A Walmajarri man based in Fitzroy Crossing in the West Kimberley, Prince spent his early years working on cattle stations until losing a leg in a riding accident. His art combines diverse influences drawn from television, the traditional Kimberley craft of boab nut carving, desert iconography and the epic characters of the Narrangkarni (Dreamtime). Surreal and kaleidoscopic at first glance, these works offer an incisive commentary on the political and social issues of today, and on Western Australia’s dark and mostly undocumented history.

All Mixed Up is curated by Emilia Galatis and presented in association with Perth Festival in collaboration with Mangkaja Arts. Virtual Tour Resources Read the curatorial essay & exhibition floorsheet. FEATURE STORY MARCH/APRIL EDITION 2020: Mixing it up – art from Fitzroy Crossing – Artists Chronicle. South Africa Is Fast Becoming The African Continent’s Art And Design Capital. With a world-class museum that is the biggest public art space to open on the continent for more than a century, annual art fairs in Johannesburg and Cape Town, and vibrant gallery scenes that have been steadily growing for the last decade, South Africa has become the continent’s art and design hub. 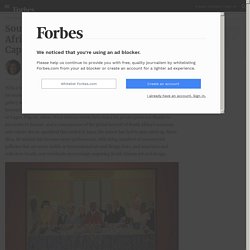 Compared to art capitals like Dakar, Senegal, or Lagos, Nigeria, where West African artists have had a far greater presence thanks to proximity to Europe, and a consequence of the global boycott of South Africa’s economy and culture due to apartheid that ended in 1994, the nation has had to play catch up. Since then, its market has become more professional, with rising numbers of commercial galleries that are more visible at international art and design fairs, and museums and collectors locally and worldwide increasingly acquiring South African art and design. 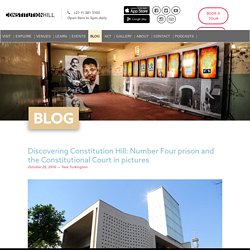 The building stands in a key position on Constitution Hill, and​ is open to the public and free to visit. Visitors climbing the walkway that divides the historical Number Four prison, known for its oppression, and the Constitutional Court, known for its progressive decisions on landmark cases. The front door of the Constitutional Court building. Constitution Hill is a must-see attraction in Johannesburg – it's an iconic site that exposes visitors to South Africa's disturbing apartheid history, but is also a reflection of the country's dynamic present. Whenever I have visitors from out of town and an hour or two to spend, I like to take them to Constitution Hill, one of Johannesburg's top tourist attractions. 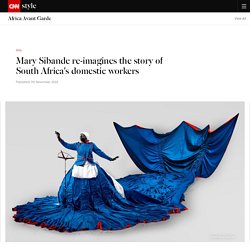 Sibande, whose older female relatives had been domestic workers, was assigned by one of her professors to tell a story through her artwork. "I remember talking to my supervisor and saying, 'I want to play detective and investigate why these women in my family were all domestic workers.' I wanted to pay homage to them," said Sibande. Since graduating -- with honors -- in 2007, the artist, who is now 37 years old, has developed many larger-than-life sculptural variations of Sophie, all based on Sibande's body and cast in fiberglass and silicon. Growing up in a small rural town in eastern South Africa, Sibande, whose work has been collected by institutions including the Smithsonian in Washington, and Zeitz MOCAA, in Cape Town, initially wanted to become a fashion designer. Mary Sibande – poking at power relations in post-apartheid South Africa. The work of South African artist Mary Sibande tells the tale of her alter-ego Sophie, a domestic worker who finds refuge in dreams where she emancipates herself from the ghoulish realism of an ordinary existence, cleaning other people's homes. 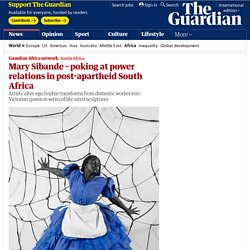 Exploring the construction of identity within post-apartheid South Africa, Sibande's work probes the stereotypical contextualisation of the black female body. The imaginary life of Sophie is collated through a series of human scale sculptures – moulded on Sibande herself. Don't be fooled by her seemingly calm demeanour and closed eyes, nor her large blue dress topped with a crispy white apron. This hybrid Victorian garb is in fact a gateway to uncharted elsewheres.