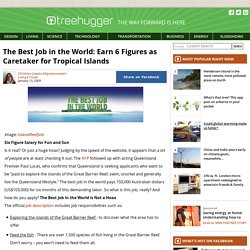 Or just a huge hoax? Judging by the speed of the website, it appears that a lot of people are at least checking it out. The AFP followed up with acting Queensland Premier Paul Lucas, who confirms that Queensland is seeking applicants who want to be "paid to explore the islands of the Great Barrier Reef, swim, snorkel and generally live the Queensland lifestyle. " Australia Advertises the 'Best Job Ever' Best Jobs in the World definition. Réelle fierté nationale australienne, la campagne du Best Jobs in the World est l'une des opérations marketing les plus réussies du monde (d'après le DG de Tourism Australia 2010-2014, Andrew McEvoy). 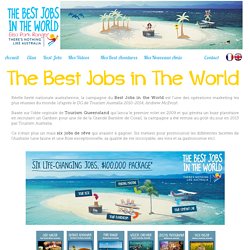 A doctor, a policeman, a fireman, a mailman, a nurse, a bus driver, a pilot, a teacher, a waiter, a barber, a student, a cook large flashcards PowerPoint flashcards small game cards bingo cards handout color pictures with black and white backings game cards bingo cards multilingual handouts: Mark's note: I use these cards as a first introduction to 'he' and 'she.' What's he? 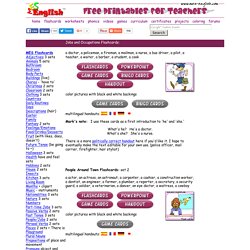 There is a more politically correct handout here if you'd like it. People Around Town Flashcards: set 2. SixPix #5 ESL Listening Game about Job Ads. Thanks for calling the local College Job Center. 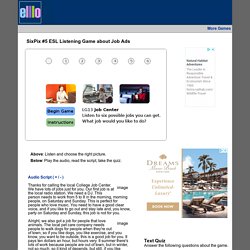 We have lots of jobs just for you. Our first job is at the local radio station. We need a DJ. This person needs to work from 5 to 8 in the morning, morning people, on Saturday and Sunday. This is perfect for people who love music. Reading Comprehension Quiz: Applying for a Job. 1. 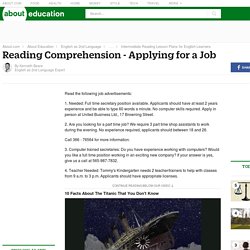 Needed: Full time secretary position available. Applicants should have at least 2 years experience and be able to type 60 words a minute. No computer skills required. Apply in person at United Business Ltd., 17 Browning Street. 2. Call 366 - 76564 for more information. Top 5 Tips for Creating Impressive Video Resumes. In today's highly competitive job market, creating the right video resume to accompany your traditional CV can make you stand out from the crowd. 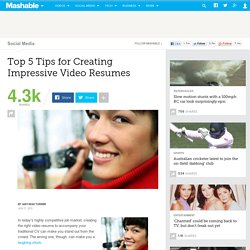 The wrong one, though, can make you a laughing stock. Getting it right can be pretty tough. If you're considering going down the video resume route, we've got some advice for you from pros in the know, as well as real-life examples of great attempts from clued-in job hunters. Take a look at our five must-read tips for creating a video resume and please let us know which examples you like (as well as any tips you'd like to share) in the comments below. 1. Teenage Jobs. En 3ème, nous abordons le thème des métiers, orientation oblige! 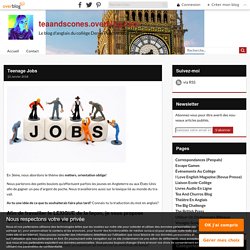 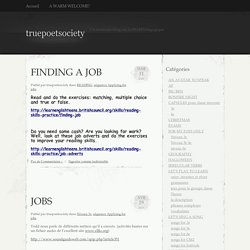 Do you need some cash? Are you looking for work? Well, look at these job adverts and do the exercises to improve your reading skills. Avr 29 2013. Séquence 3 - A job interview - [ LA CLASSE D'ANGLAIS] The best jobs in the world. We’ve all been in the situation of looking at someone else’s job and wishing ours was half as interesting. 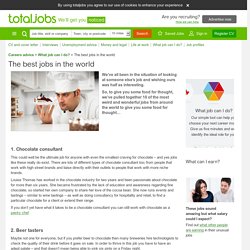 So, to give you some food for thought, we’ve pulled together 10 of the most weird and wonderful jobs from around the world to give you some food for thought… 1. Chocolate consultant This could well be the ultimate job for anyone with even the smallest craving for chocolate – and yes jobs like these really do exist. There are lots of different types of chocolate consultant too; from people that work with high street brands and liaise directly with their outlets to people that work with more niche brands. Louise Thomas has worked in the chocolate industry for two years and been passionate about chocolate for more than six years. 2. Maybe not one for everyone, but if you prefer beer to chocolate then many breweries hire technologists to check the quality of their drink before it goes on sale. 3. 4. Queensland's tourism department offers 'the best job in the world' What would you do to secure the job of exploring a cluster of tropical islands and reporting back to an envious world? 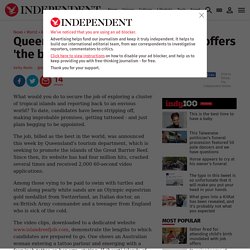 To date, candidates have been stripping off, making improbable promises, getting tattooed - and just plain begging to be appointed. The job, billed as the best in the world, was announced this week by Queensland's tourism department, which is seeking to promote the islands of the Great Barrier Reef. Since then, its website has had four million hits, crashed several times and received 2,000 60-second video applications. Among those vying to be paid to swim with turtles and stroll along pearly white sands are an Olympic equestrian gold medallist from Switzerland, an Italian doctor, an ex-British Army commander and a teenager from England who is sick of the cold. The video clips, downloaded to a dedicated website www.islandreefjob.com, demonstrate the lengths to which candidates are prepared to go. Reuse content. The best job in the world.

Once again the organisation which promotes Australia, Tourism Australia, is advertising the best job in the world. But this year, they have six jobs going, all for six months, with a great salary and extra spending money. If you think one of these is your dream job, you have to make a 30-second video explaining why you are the best person for the role. But – be warned. Thousands of people will be competing for each post. Projet: 'The Best Job in the World' (EOi/EOc) - [English website of the Académie de Toulouse] The best jobs in the world ! About the Best Jobs in the World campaign - Campaigns - Tourism Australia.

Media & Industry > Campaigns > Past Campaigns. The Best Job In The World [case] Best Jobs in the World Park Ranger. Welcome TO our travel Blog about Australia! 2013, June, 21st : Sydney – My life changed for good...I just won the worldwide competition "The Best Job in the World" organised by Tourism Australia, beating over 330,000 applicants from 196 countries! After an intense 3 month campaign and many challenges, I couldn't believe it! I spent 6 months exploring the beautiful and diverse Queensland, the second largest State in Australia. With me, my partner Max, who is a photographer, perfect! Alongside Queensland's park rangers, we've explored the great outdoors and got up close and personal with exotic wildlife. We left France with a Working Holiday Visa, allowing us to stay 1 year to travel and work in Australia.