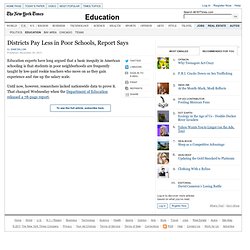 Education Week TFA Teachers How Long Do They Teach Why Do They Leave. Recruiting and Retaining Teachers: What Matters Most and What Can Government Do? Linda Darling-Hammond Charles E. 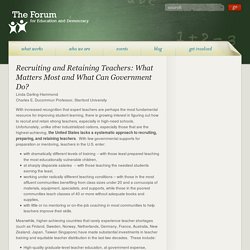 Ducommun Professor, Stanford University With increased recognition that expert teachers are perhaps the most fundamental resource for improving student learning, there is growing interest in figuring out how to recruit and retain strong teachers, especially in high-need schools. Unfortunately, unlike other industrialized nations, especially those that are the highest-achieving, the United States lacks a systematic approach to recruiting, preparing, and retaining teachers. With few governmental supports for preparation or mentoring, teachers in the U.S. enter: Meanwhile, higher-achieving countries that rarely experience teacher shortages (such as Finland, Sweden, Norway, Netherlands, Germany, France, Australia, New Zealand, Japan, Taiwan Singapore) have made substantial investments in teacher training and equitable teacher distribution in the last two decades. 1) There is not an overall shortage of teachers in the United States. 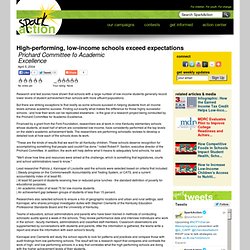 But there are striking exceptions to that reality as some schools succeed in helping students from all income levels achieve academic success. Finding out exactly what makes the difference for those highly successful schools - and how their work can be replicated elsewhere - is the goal of a research project being conducted by the Prichard Committee for Academic Excellence. Financed by a grant from the Ford Foundation, researchers are at work in nine Kentucky elementary schools whose students, at least half of whom are considered low-income, have consistently performed at the top levels on the state's academic achievement tests. 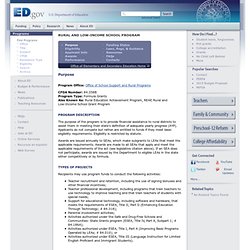 Applicants do not compete but rather are entitled to funds if they meet basic eligibility requirements. Eligibility is restricted by statute. 10. 9. Low Income Does Not Cause Low School Achievement: Creating a Sense of Family and Respect in the School Environment. 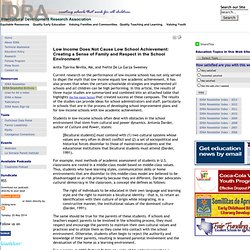 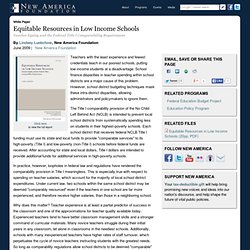 Resource 7. Parental involvement is said to be one of the key factors in ensuring educational success for children. 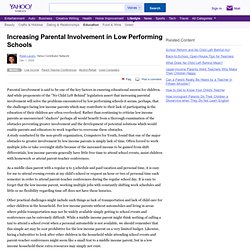 And while proponents of the "No Child Left Behind" legislation assert that increasing parental involvement will solve the problems encountered by low performing schools it seems, perhaps, that the challenges facing low income parents which may contribute to their lack of participating in the education of their children are often overlooked. Rather than continuing to criticize low income parents as unconcerned "slackers" perhaps all would benefit from a thorough examination of the obstacles preventing greater involvement and the development of potential solutions which would enable parents and educators to work together to overcome these obstacles.

A study conducted by the non-profit organization, Computers for Youth, found that one of the major obstacles to greater involvement by low income parents is simply lack of time. References: Kallen, Tsikalas and Stock, Elisabeth. Resource 6. Resource 5. Resource 4. Increase the supply of high-quality public schools in educationally underserved communities. 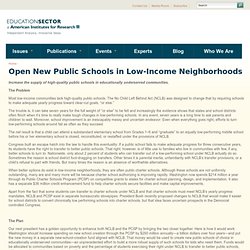 The Problem Most low-income communities lack high-quality public schools. The No Child Left Behind Act (NCLB) was designed to change that by requiring schools to make adequate yearly progress toward clear-cut goals, “or else.” Resource 3? (Same reference as Resource 1) Podcast: Education Next talks with David Figlio. 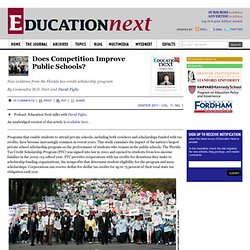 An unabridged version of this article is available here. Programs that enable students to attend private schools, including both vouchers and scholarships funded with tax credits, have become increasingly common in recent years. This study examines the impact of the nation’s largest private school scholarship program on the performance of students who remain in the public schools. The Florida Tax Credit Scholarship Program (FTC) was signed into law in 2001 and opened to students from low-income families in the 2002–03 school year.

FTC provides corporations with tax credits for donations they make to scholarship funding organizations, the nonprofits that determine student eligibility for the program and issue scholarships. Although little noticed, tax credit scholarship programs now send many more low-income students to private schools than do traditional school voucher programs. Resource 2. By John Podesta | May 11, 2007 Chairman Miller and members of the Committee, thank you for inviting me to testify today. 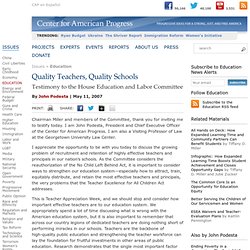 I am John Podesta, President and Chief Executive Officer of the Center for American Progress. I am also a Visiting Professor of Law at the Georgetown University Law Center. I appreciate the opportunity to be with you today to discuss the growing problem of recruitment and retention of highly effective teachers and principals in our nation’s schools. As the Committee considers the reauthorization of the No Child Left Behind Act, it is important to consider ways to strengthen our education system—especially how to attract, train, equitably distribute, and retain the most effective teachers and principals, the very problems that the Teacher Excellence for All Children Act addresses. Resource 1. Recent government education policies seem to assume that academic achievement as measured by test scores is the primary objective of public education.

A prime example is the federal No Child Left Behind law, which requires schools to bring all of their students to “proficient” levels on math and reading tests by 2014. Many state accountability plans judge schools on the basis of these tests alone, and some states and school districts are considering tying teachers’ compensation to student test results. Yet education historically has served a variety of functions (e.g., socialization, civic training), and public support for music and art in school suggests that parents value things beyond high test scores.

Are test scores the educational outcomes that parents value most?