GMO Facts. What are GMOs? 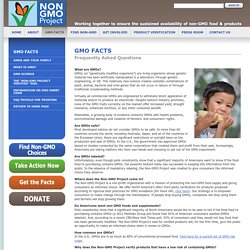 GMOs (or “genetically modified organisms”) are living organisms whose genetic material has been artificially manipulated in a laboratory through genetic engineering, or GE. This relatively new science creates unstable combinations of plant, animal, bacteria and viral genes that do not occur in nature or through traditional crossbreeding methods. Virtually all commercial GMOs are engineered to withstand direct application of herbicide and/or to produce an insecticide. Despite biotech industry promises, none of the GMO traits currently on the market offer increased yield, drought tolerance, enhanced nutrition, or any other consumer benefit.

Meanwhile, a growing body of evidence connects GMOs with health problems, environmental damage and violation of farmers’ and consumers’ rights. Tell Congress: Label GMOs! When companies genetically modify our food, we Americans need to know about it. 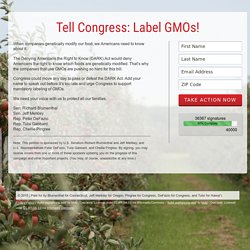 The Denying Americans the Right to Know (DARK) Act would deny Americans the right to know which foods are genetically modified. That’s why the companies that use GMOs are pushing so hard for this bill. Congress could move any day to pass or defeat the DARK Act. Add your name to speak out before it’s too late and urge Congress to support mandatory labeling of GMOs. We need your voice with us to protect all our families. Rachel Parent - teen activist fighting for GMO labeling. Meet Rachel Parent — the teen fighting for GMO labelling in Canada. Watch: Rachel Parent is a 15-year-old activist. 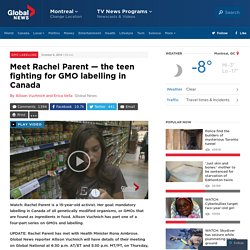 Her goal: mandatory labelling in Canada of all genetically modified organisms, or GMOs that are found as ingredients in food. Allison Vuchnich has part one of a four-part series on GMOs and labelling. UPDATE: Rachel Parent has met with Health Minister Rona Ambrose. Global News reporter Allison Vuchnich will have details of their meeting on Global National at 6:30 p.m. AT/ET and 5:30 p.m. Standing in the grocery store aisle surrounded by processed and packaged food, examining ingredients and scanning labels: this is shopping with Rachel Parent, and it is a thorough process.

“About 70 per cent of the (processed) food on all our grocery store shelves is genetically modified or has GMO ingredients in it,” Parent told Global News as she reached for a container of relish and examined its ingredient list. “Of course, I would never know unless it was labelled.” READ MORE: Vermont’s food fight over mandatory GMO labelling © Shaw Media, 2014. Home of Rachel Parent, GMO Educator and Activist - Raising awareness about the risks of genetically modified organisms in our food and the need for GMO Labeling.

Food labels may get more complicated. Voters in two states will decide if people will get to learn what is deep inside their food. 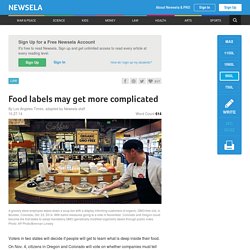 On Nov. 4, citizens in Oregon and Colorado will vote on whether companies must tell buyers, on the package, when food has been genetically changed in any way. The proposed laws call for labeling those foods. GMO Facts. Inside the food industry: the surprising truth about what you eat. On a bright, cold day in late November 2013, I found myself in the dark, eerie, indoor expanses of Frankfurt’s Blade Runner-like Festhalle Messe. 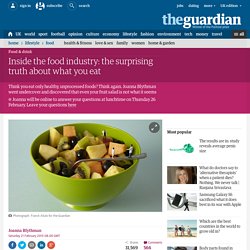 I was there undercover, to attend an annual trade show called Food Ingredients. This three-day exhibition hosts the world’s most important gathering of ingredients suppliers, distributors and buyers. In 2011, when it was held in Paris, more than 23,000 visitors attended from 154 countries, collectively representing a buying power of €4bn (£2.97bn). Think of it as the food manufacturers’ equivalent of an arms fair. It is not open to the public. While exhibitors at most food exhibitions are often keen for you to taste their products, few standholders here had anything instantly edible to offer.

A pastry chef in gleaming whites rounded off his live demonstration by offering sample petits fours to the buyers who had gathered. This is the goal of the wares on show, something the marketing messages make clear. Not sure what to have for dinner? Food maker sued by Florida mom over Goldfish "natural" label. FORT LAUDERDALE, Fla. — If you have bought Cheddar Goldfish snacks in the past four years, one fed-up Florida mom wants to help you get your money back. 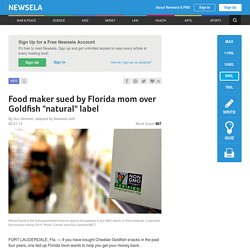 And she has put South Florida at the center of a national debate over genetically modified foods. Those are foods that have been changed in a lab. Palm Beach County schoolteacher Lisa Leo has taken Pepperidge Farm to court for false advertising. The huge food company calls its popular fish-shaped crackers “natural" on the package. She says the crackers contain genetically modified soybeans. Her lawsuit was filed June 11 in federal court. A Consumer's Right To Know Shoppers "have a right to know what they’re putting in their bodies,” said Joshua Eggnatz. Genetically modified organisms, or GMOs, are plant or animal products. About 90 percent of the corn, cotton, soybeans and sugar beets grown in the United States are genetically altered. The Food and Drug Administration (FDA) has not defined what “natural” means on food labels. Food labels may get more complicated.