(260) Scrivener 2 Basics - Snapshots. Scrivener on the Go « Speaking to the Eyes. Scrivener: A great program just got better! 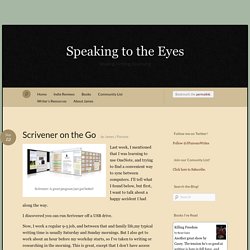 Last week, I mentioned that I was learning to use OneNote, and trying to find a convenient way to sync between computers. I’ll tell what I found below, but first, I want to talk about a happy accident I had along the way. I discovered you can run Scrivener off a USB drive. Now, I work a regular 9-5 job, and between that and family life,my typical writing time is usually Saturday and Sunday mornings. But I also get to work about an hour before my workday starts, so I’ve taken to writing or researching in the morning. So I’ve been using a combination of Sugarsync and/or Google Drive, both of which I’ve used in the past with great effect. So in researching how to update OneNote conveniently, I found out that you can run Scrivener from a flash drive.

Once you do this, you can open your Scrivener files on another machine through the USB stick. Now to OneNote. At work, I have 2007, so this isn’t an option. Ultimately, as I’ve said, this is now moot. Wrist-Saving Keyboard Shortcuts – Tech Tools for Writers. By C.K. 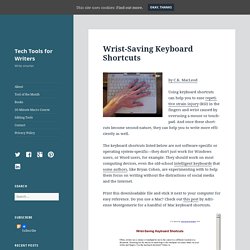 MacLeod Using keyboard shortcuts can help you to ease repetitive strain injury (RSI) in the fingers and wrist caused by overusing a mouse or touchpad. And once these shortcuts become second-nature, they can help you to write more efficiently as well. The keyboard shortcuts listed below are not software-specific or operating system-specific—they don't just work for Windows users, or Word users, for example. They should work on most computing devices, even the old-school intelligent keyboards that some authors, like Bryan Cohen, are experimenting with to help them focus on writing without the distractions of social media and the Internet. Compare Two Documents at Once in Microsoft Word.

What exactly is a 3 dimensional character? And what are they? Six Things You Should Be Including in Your EBook (and Probably Aren't) by David Kudler. By David Kudler (@StillpointDigPr) David, who is currently serving as vice president of the Bay Area Independent Publishers Association (BAIPA) is also the proprietor of a digital publishing company. 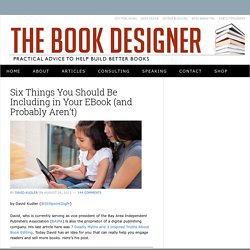 His last article here was 7 Deadly Myths and 3 Inspired Truths About Book Editing. Today David has an idea for you that can really help you engage readers and sell more books. Here’s his post. Or, How to Use Your Ebooks as Your Best Marketing Platform Quick: who—aside from you, your immediate family, and your dog—are the people most excited about your book, most ready to talk about it with their friends, and best equipped to talk about your book’s virtues?

Well, there are lots of possible answers for each of those questions, but when it comes to identifying the whole bunch, I’d bet it’s a group that you haven’t thought much about: The people who have just finished the last page. Think about it. Most self-publishers don’t do much of anything. Now to the business of building those links. Okay. How Using ARCHETYPES Can Transform Your Character Work. The 25 best set pieces of Steven Spielberg’s career. Georges Polti's 36 Dramatic Situations. Disciplines > Storytelling > Plots > Georges Polti's 36 Dramatic Situations Georges Polti was a 19th century French writer described 36 situations that may be found in many stories, based on the list identified by Goethe who said it was originated by Italian Carlo Gozzi (1720-1806). 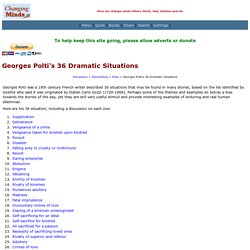 Perhaps some of the themes and examples do betray a bias towards the stories of the day, yet they are still very useful stimuli and provide interesting examples of enduring and real human dilemmas. Here are his 36 situation, including a discussion on each one: Although this has been taken as definitive by some and Polti initially said there was 'exactly 36 dramatic situations ... and therein we have all the savour of existence', he later admitted that there could be more or less than this (it all depends on your criteria for division).

He also said that these aligned with 36 basic emotions, although he did not list these (and has been criticized for this). Polti, Georges. (1916). How to Compare Two Documents in Microsoft Word. Comparing Documents in Word 2007, 2010, 2013, 2016. How To Create Footnotes For Kindle Ebooks - Kindle Template - Ebook Template. In this blog post and video, I show you how to quickly and easily create and insert footnotes into your Kindle books using our eBook Template. 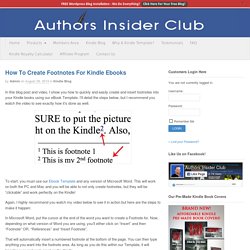 I’ll detail the steps below, but I recommend you watch the video to see exactly how it’s done as well. To start, you must use our Ebook Template and any version of Microsoft Word. This will work on both the PC and Mac and you will be able to not only create footnotes, but they will be “clickable” and work perfectly on the Kindle! Again, I highly recommend you watch my video below to see it in action but here are the steps to make it happen: In Microsoft Word, put the cursor at the end of the word you want to create a Footnote for.

That will automatically insert a numbered footnote at the bottom of the page. There are 2 steps to making a footnote clickable for the Kindle: 1. 2. Try Issuu. (196) Useful Tips - Customising Scrivener. (196) Best Free Mind Mapping Software for Windows & Mac! (Edraw MindMaster)