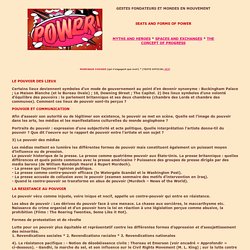 Untitled. Places and forms of power “Places” could be important buildings or institutions that represent a certain form of power, for example Buckingham Palace – a symbol of the British monarchy, the White – a symbol of the American presidency. 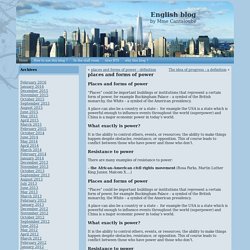 The 4th Power - The Media. Everything we read, watch and buy online will be controlled by government by 2025. More than 1,400 experts, including analysts and professors were surveyedFindings are detailed in The Net Threats report from Pew Research Centre Each expert was asked to explain the main threats facing the web by 2025Report details a system heavily influenced by governments, large corporations, and security servicesThis means what we buy, read, watch and share could be restricted It also highlighted how these concerns are already becoming common place By Victoria Woollaston Published: 11:14 GMT, 14 July 2014 | Updated: 19:12 GMT, 14 July 2014 Last week’s emergency surveillance legislation may have sounded like something out of George Orwell’s novel 1984, but was cited as yet another real-life example of states trying to control their citizens. 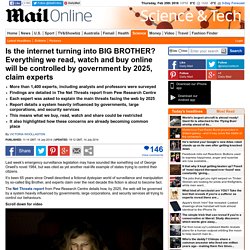 It’s been 65 years since Orwell described a fictional dystopian world of surveillance and manipulation by so-called Big Brother, and experts claim over the next decade this fiction is about to become fact. Scroll down for video 'This will grow. These 6 Corporations Control Almost Everything We Watch, Hear And Read. Gupea 2077 35511 1. Newspapers in United Kingdom. Today's press covers. Kiosko.net. The Papers. Various opinion polls, which show a narrowing of the gap between the Conservatives and Labour, are reported by a number of Sunday's papers. 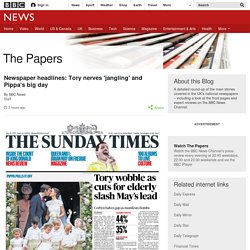 With the headline, "The dementia tax backlash", the Mail on Sunday claims Theresa May's hopes of an election landslide have been damaged by "strong opposition" to her plan to make more elderly people pay for social care. The Observer says some "nervous" candidates are "urging the Tory leadership to make another attempt to explain the policy to voters". And the Sunday Times says ministers have privately expressed fears that the policy could cost votes, but suggests it's not the only reason why the polls have narrowed. It thinks the Conservative manifesto "bombed" when published and a "growing number of voters" appear to be connecting with Jeremy Corbyn's "unashamed" socialist pitch, "setting nerves jangling in Tory high command". 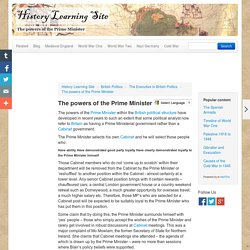 The Prime Minister selects his own Cabinet and he will select those people who: Have abilityHave demonstrated good party loyaltyHave clearly demonstrated loyalty to the Prime Minister himself Those Cabinet members who do not ‘come up to scratch’ within their department will be removed from the Cabinet by the Prime Minister or ‘reshuffled’ to another position within the Cabinet - almost certainly at a lower level. Any senior Cabinet position brings with it certain rewards – chauffeured cars; a central London government house or a country weekend retreat such as Dorneywood; a much greater opportunity for overseas travel; a much higher salary etc.

President versus Prime Minister. The president of America is frequently referred to as the world's most powerful person. 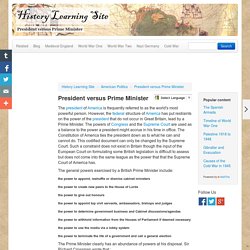 However, the federal structure of America has put restraints on the power of the president that do not occur in Great Britain, lead by a Prime Minister. How to Get Your Kids Excited About the General Election  'Cause if you're little you can do a lot, you/ Mustn't let a little thing like 'little' stop you ... 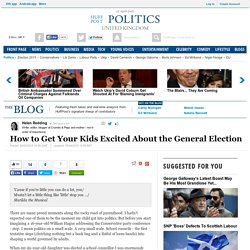 /Matilda the Musical There are many proud moments along the rocky road of parenthood. I hadn't expected one of them to be the moment my child got into politics. But before you start imagining a 16-year-old William Hague addressing the Conservative party conference - stop. I mean politics on a small scale. When my six-year-old daughter was elected a school councillor I was enormously proud. I'm not as clued-up about politics as I should be or would like to be, so the school council became a handy microcosm of the big, bad world.

It's not all about popularity - is it?