Alexander McQueen depicted his Menswear offering, during turbulent times on Wall Street - as soulless, robot bankers driven by profit. It's telling that when Alexander McQueen conceded an interest in superheroes for his new collection, the first creature that sprung to his mind was a warlock. 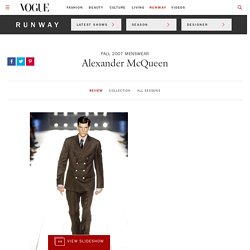 Let's face it—he's always found the dark side a much more inspiring proposition than its sweetness 'n' light alternative, and for that we can all be heartily grateful, especially when it yields a collection as startling and individual as this. Google Taps Kate Lanphear for Fashion Week Google Search Product – WWD. Google’s new take on fashion week means searchable highlights provided by designers and shopping directly from the runway. 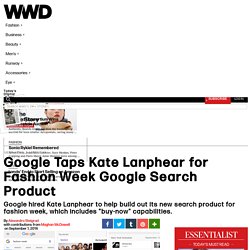 And to act as a consultant to the whole thing, Google has tapped Kate Lanphear, the former editor in chief of Maxim, in the creation of this new New York Fashion Week-centric search product. The special Google fashion week content is accessible through Google Search on a mobile phone, and users can see the content by either searching “Fashion Week” or “designer + Fashion Week.” Starting today, and gradually increasing throughout fashion week, Google’s search capabilities will give users the ability to search photos of fashion week highlights with partners, such as BFA and FirstView, including runway looks, backstage and street-style photos, and front-row and party images. The search option also allows users to search trends and buy directly off the runway from select designers, as well as learn about designers’ inspirations via an experimental feature.

The Rise and Fall of Charivari, the Cult Boutique of Fashion’s Cutting. Fashion insiders sometimes use war metaphors to explain their world—they describe going to the collections in New York, Milan, and Paris as being in the trenches—and that can be a shocker. 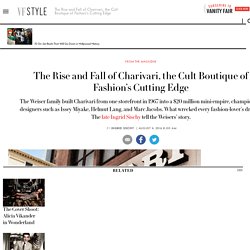 How, one may ask, can sitting at a fashion show watching done-up models strut up and down the runway, while showing off the latest trends in frocks, leggings, jackets, and jumpsuits to the beat of Lady Gaga, have anything to do with such a serious subject? Of course it doesn’t really, but without poetic license there would be no fashion. Fendi's show on the Great Wall of China - Bernard Arnault discusses how China will become the worlds biggest economical powerhouse within 25 years. Karl Lagerfeld, looking very 1940s Berlin in his toggle-front, contrast-collar Kris Van Assche jacket, is on the Great Wall of China, curled up on a suede club chair. 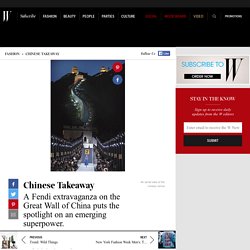 Spread over his lap is an expanse of knitted Russian sable­­ that is worth as much as several years’ wages for most of China’s citizens. Chanel, the Saviour of Savoir-Faire. PARIS, France — In Pantin, a dreary Paris suburb that is home to the complex which houses five of the eleven savoir-faire maisons acquired by Chanel since 1985, ominous storm clouds are gathering. 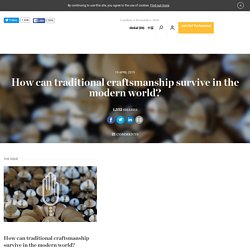 But once inside, the gloom of the day instantly evaporates. Scenes of riotous colour and activity appear as if from nowhere, as hurried craftspeople dash along brightly lit corridors, opening discreetly labelled doors painted in the same off-white as the walls, leading into cornucopias of creativity. Each maison is a global leader in its métier, from Lesage’s unimaginably dense and intricate embroidery to Lemarié’s exquisite feather and flower creations to Maison Michel’s ethereal millinery. 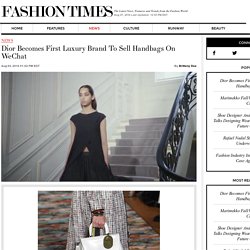 The brand made its iconic Lady Dior bag available on the platform on Monday for the upcoming Qixi, or Chinese Valentine's Day, on Aug. 9. Buyers were able to directly purchase and pay through WeChat, and on Tuesday, the bag was already sold out. "Since luxury brands can find their target consumers by big data of WeChat, the largest social network in China, it's easier for them to advertise and sell products on WeChat," Lu Zhenwang, an internet expert and CEO of the Shanghai-based Wanqing Consultancy, told China Daily. "Many luxury brands are operating under pressure, and they would like to open up the market through e-commerce platforms. Even if the sales were slow, they could achieve results through marketing and branding," he added. Dior also made headlines in the U.S. earlier this week when it opened a new boutique in Atlanta.

Chanel Tips Its Hat to E-commerce – WWD. PARIS — Venturing further into e-commerce, Chanel on Wednesday launched online selling in Europe for hatmaker Maison Michel, one of its specialty ateliers. 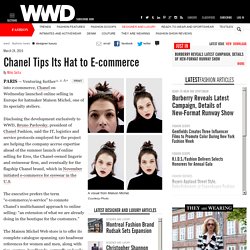 Fashion house Balmain sold to Qatar's Mayhoola sovereign wealth fund. The Qatari investment fund that owns the Italian Valentino label will take over the French fashion house Balmain, which has become a favourite of film stars, the adviser for the acquisition has announced. 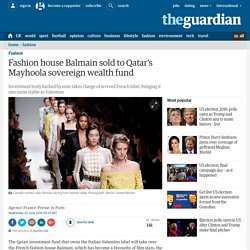 “After completing this transaction Mayhoola for Investments will hold 100% of Balmain’s capital,” said the merger and acquisitions company Bucephale Finance. The French financial daily Les Echos in reporting on the acquisition said the Qataris offered €485m (£372m) for Balmain, which is 70% held by the heirs of the former CEO, Alain Hivelin, who died in December 2014, with the remaining 30% held by management. The reported Qatari offer was higher than sale estimates of between €300m-€400m. Mayhoola is an investment vehicle supported by the emir of Qatar. Balmain was started in 1945 by designer Pierre Balmain and has passed through several hands and periods of financial difficulty over the years. 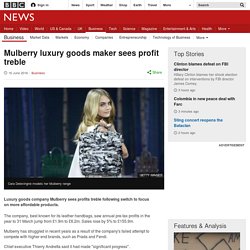 The company, best known for its leather handbags, saw annual pre-tax profits in the year to 31 March jump from £1.9m to £6.2m. Sales rose by 5% to £155.9m. Mulberry has struggled in recent years as a result of the company's failed attempt to compete with higher end brands, such as Prada and Fendi. Chief executive Thierry Andretta said it had made "significant progress". Mulberry has spent the past two years introducing new designs and bringing in lower priced bags in the £500 to £800 range. Coach, in Turnaround Mode, Reports Sales Growth.

Prada to Launch on Net-a-porter, Mr Porter – WWD. LONDON — Prada is finally taking the leap into online selling in Europe, starting with Net-a-porter and Mytheresa.com. 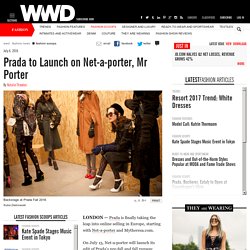 On July 15, Net-a-porter will launch its edit of Prada’s pre-fall and fall runway pieces as well as bags, shoes and small leather goods. The Net-a-porter introduction will take place the same day Mytheresa.com, part of Neiman Marcus Group, unveils Prada’s fall ready-to-wear collection on its online store. The launches have been long-awaited as Prada is one of the last luxury brands to resist selling online. “Prada is the ultimate brand every store wants to sell, but only few can, and we’re honored to be one of them,” said Federico Marchetti, chief executive officer of Yoox Net-a-porter Group.

“It opens a whole new online chapter for both groups.” Burberry and Tom Ford Announce See-Now-Buy-Immediately Collections for September. What a day of drama! Savers to suffer as First Direct cuts rates further than Bank of England. One of the UK’s most high profile savings providers has announced interest rate cuts in excess of the Bank of England’s recent base rate reduction. At the weekend, First Direct wrote to savers telling them it would be reducing returns on a range of accounts from 18 October.

Two accounts will see cuts greater than the 0.25% reduction announced by the BoE on Thursday. First Direct’s cash Isa will have its rate cut by 0.4 percentage points, from 1.3% to 0.9%, while the rate on its bonus savings account will be chopped from 0.75% to 0.4%. A range of other accounts will be subject to a 0.25 percentage point cut. In an email to customers, First Direct said: “We know this isn’t great news for savers, but even though our savings rates are not directly linked to the base rate, we’ve taken this time to review our savings accounts.” Susan Hannums, director of Savingschampion.co.uk, said the cut was “adding insult to injury” for savers.