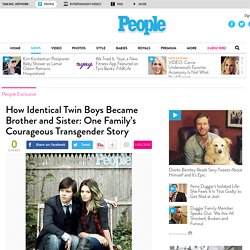 With their dark brown eyes and quick smiles they look so similar you’d think they were identical twins--except he’s a boy and she’s a girl. So that's impossible, right? Wrong. In a new book Becoming Nicole: The Transformation of a an American Family, Pulitzer-Prize winner Amy Ellis Nutt tells the honest, intimate story of how Wyatt became Nicole, including how their mother Kelly’s certainty that she would do whatever it took to raise happy children overcame her fears, and how their father Wayne struggled to accept what Jonas always knew.

Where did Jonas' understanding come from? He protected Nicole (the family changed Wyatt’s name just before fifth grade) fiercely, particularly in elementary school, where she was harassed and bullied until Kelly and Wayne decided to move three hours away (leading to a ground breaking civil suit establishing rights for transgender children). TheHollywoodTimes. For its 14th annual Honors Gala, the Matthew Shepard Foundation is proud to announce the recipients of this year’s “Spirit of Matthew Award” and “Dennis Dougherty Award for Community Service.” 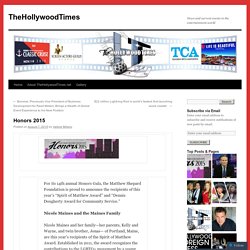 Nicole Maines and the Maines Family Nicole Maines and her family—her parents, Kelly and Wayne, and twin brother, Jonas— of Portland, Maine, are this year’s recipients of the Spirit of Matthew Award. Established in 2011, the award recognizes the contributions to the LGBTQ+ movement by a young person who exemplifies the restless desire for positive social change through constructive activism. Nicole, a trans* college freshman, brought tremendous progress to her school district through activism and ultimately a successful lawsuit with the support of her brother and parents. When their children were entering sixth grade, the Maineses moved to Portland to escape bullying. 17-Year-Old Trans Advocate Nicole Maines Makes Guest Appearance On USA’s “Royal Pains” 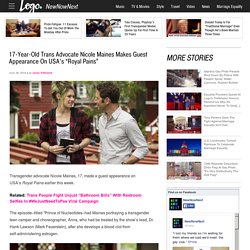 Related: Trans People Fight Unjust “Bathroom Bills” With Restroom Selfies In #WeJustNeedToPee Viral Campaign The episode–titled “Prince of Nucleotides–had Maines portraying a transgender teen camper and choreographer, Anna, who had be treated by the show’s lead, Dr. Hank Lawson (Mark Feuerstein), after she develops a blood clot from self-administering estrogen. USA also aired a PSA with Feuerstein about the transgender community and the importance of allies in partnership with PFLAG. 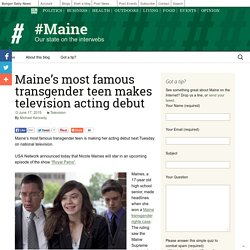 USA Network announced today that Nicole Maines will star in an upcoming episode of the show “Royal Pains”. Transgender student Nicole Maines (center) with her father, Wayne Maines (left), and brother Jonas, speaks to reporters outside the Penobscot Judicial Center, Wednesday, June 12, 2013, in Bangor. (Robert F. Bukaty | AP/Pool) Transgender student’s lawsuit ends with $75K award, order telling Orono schools to allow bathroom access. Transgender Teen Awarded $75,000 in School Restroom Lawsuit. A court in Maine awarded the family of a transgender teenager $75,000 in a discrimination lawsuit against a school district that forced the student to use a staff restroom rather than a facility reserved for pupils, reports the Associated Press. 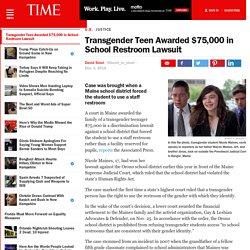 Nicole Maines, 17, had won her lawsuit against the Orono school district earlier this year in front of the Maine Supreme Judicial Court, which ruled that the school district had violated the state’s Human Rights Act. The case marked the first time a state’s highest court ruled that a transgender person has the right to use the restroom of the gender with which they identify. Nicole Maines, History-Making Transgender Teen, Honored By Glamour Magazine. Why This Transgender Teen's Big Victory Matters. Wayne Maines was in a meeting when he got the call. 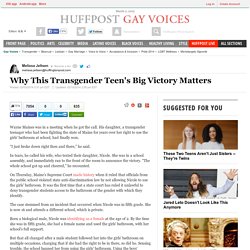 His daughter, a transgender teenager who had been fighting the state of Maine for years over her right to use the girls' bathroom at school, had finally won. “I just broke down right then and there,” he said. Nicole Maines, Transgender Student, Goes To Maine High Court. BANGOR, Maine — Maine's highest court heard arguments Wednesday over whether transgender students can use the bathroom of their choice, and the girl at the heart of the case said she hoped justices would recognize the right of children to attend school without being "bullied" by peers or administrators. 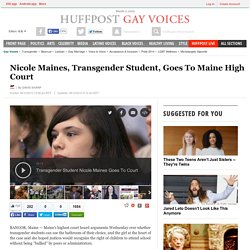 Nicole Maines, now 15, watched lawyers argue over whether her rights were violated when the Orono school district required her to use a staff bathroom after there was a complaint about her using the girls' bathroom. Maines said after the hearing in Bangor that she hopes the Supreme Judicial Court will ensure no one else experiences what she went though. "I hope they understood how important it is for students to be able to go to school and get an education and have fun and make friends, and not have to worry about being bullied by students or the administration, and to be accepted for who they are," said Maines, who now attends a high school in southern Maine.

Maine’s highest court: Transgender student’s rights were violated - The Portland Press Herald / Maine Sunday Telegram. Nicole Maines’ school was wrong to require the fifth-grader to use a unisex bathroom, justices rule in a historic gender-identity decision that could be a model for other states. 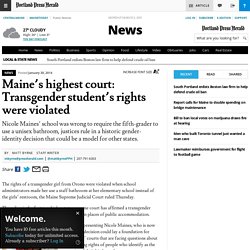 The rights of a transgender girl from Orono were violated when school administrators made her use a staff bathroom at her elementary school instead of the girls’ restroom, the Maine Supreme Judicial Court ruled Thursday. The ruling is the first in which a state supreme court has affirmed a transgender person’s right to equal access to restrooms in places of public accommodation. Lawyers representing Nicole Maines, who is now 16, said the decision could lay a foundation for other states’ courts that are facing questions about the emerging rights of people who identify as the opposite of their birth gender.

“I’m extremely proud of our state and our leaders, of what they did,” said Wayne Maines. “It sends the message that you can believe in the system,” he said. Inspiring Women of the Year from Around America: Glamour.com.