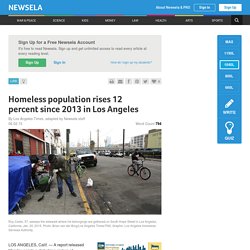 It reveals that the homeless population has jumped 12 percent in the last two years. The increase was driven by soaring rents, low wages and high unemployment, the report said. The new report was prepared by the Los Angeles Homeless Services Authority, which conducts a tally of the homeless every two years. It looked at homelessness in both the city and county of Los Angeles. Homeless Camps Next To Schools. South Portland hit by spike in homeless students - The Portland Press Herald / Maine Sunday Telegram. SOUTH PORTLAND — An unexpected and significant increase in the number of homeless students in the city’s public schools this year has officials cautiously budgeting for a similar situation in the coming year. 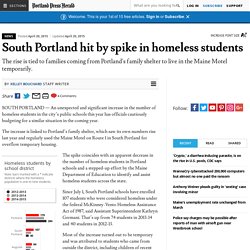 The increase is linked to Portland’s family shelter, which saw its own numbers rise last year and regularly used the Maine Motel on Route 1 in South Portland for overflow temporary housing. The spike coincides with an apparent decrease in the number of homeless students in Portland schools and a stepped-up effort by the Maine Department of Education to identify and assist homeless students across the state. Since July 1, South Portland schools have enrolled 107 students who were considered homeless under the federal McKinney-Vento Homeless Assistance Act of 1987, said Assistant Superintendent Kathryn Germani. That’s up from 74 students in 2013-14 and 40 students in 2012-13. Preble Street: Perilous wind chills drive hundreds into Portland homeless shelters. Portland's homeless shelters were filled to capacity Monday night as mounds of snow accumulated on streets and sidewalks and temperatures, combined with strong winds, produced what the National Weather Service described as "dangerously cold wind chills" - as low as minus 30 degrees - that were expected to last through early Tuesday. 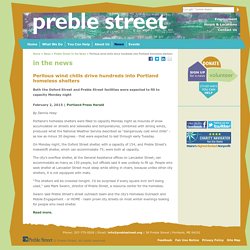 On Monday night, the Oxford Street shelter, with a capacity of 154; and Preble Street's makeshift shelter, which can accommodate 75; were both at capacity. The city's overflow shelter, at the General Assistance offices on Lancaster Street, can accommodate as many as 150 people, but officials said it was unlikely to fill up. Homelessness hits record high in Portland - The Portland Press Herald / Maine Sunday Telegram. Maine's largest city struggles to accommodate displaced families. 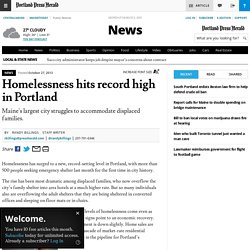 Homelessness has surged to a new, record-setting level in Portland, with more than 500 people seeking emergency shelter last month for the first time in city history. The rise has been most dramatic among displaced families, who now overflow the city’s family shelter into area hotels at a much higher rate. With A Series Of Small Bans, Cities Turn Homelessness Into A Crime. Susan St. 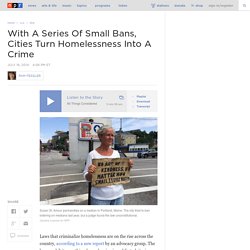 Amour panhandles on a median in Portland, Maine. The city tried to ban loitering on medians last year, but a judge found the law unconstitutional. Caroline Losneck for NPR hide caption itoggle caption Caroline Losneck for NPR Susan St. Maine's homeless youth a hidden problem - Central Maine. A girl and her baby sleep for weeks in a car because she's not old enough to stay at the local homeless shelter – that's just one example of the cases that Maine social service workers are seeing. 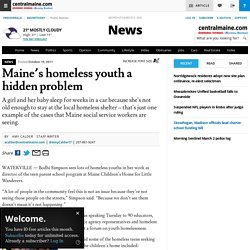 WATERVILLE — Bodhi Simpson sees lots of homeless youths in her work as director of the teen parent school program at Maine Children’s Home for Little Wanderers. “A lot of people in the community feel this is not an issue because they’re not seeing those people on the streets,” Simpson said. U.S. homelessness falls, but in Maine it’s up 26% - The Portland Press Herald / Maine Sunday Telegram. Officials cite several reasons for the state increase, especially in Portland, which has had success helping veterans find housing. 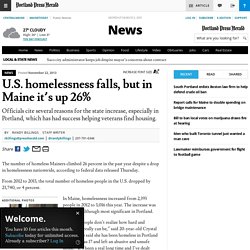 The number of homeless Mainers climbed 26 percent in the past year despite a drop in homelessness nationwide, according to federal data released Thursday. From 2012 to 2013, the total number of homeless people in the U.S. dropped by 23,740, or 4 percent. Homeless and Helpless - Information - Shaw House Bangor. By Rick Tardiff November is Youth Homeless Awareness month. 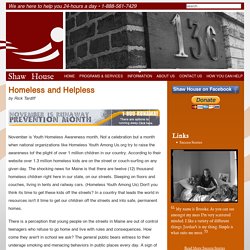 Not a celebration but a month when national organizations like Homeless Youth Among Us.org try to raise the awareness tof the plight of over 1 million children in our country. According to their website over 1.3 million homeless kids are on the street or couch-surfing on any given day. The shocking news for Maine is that there are twelve (12) thousand homeless children right here in our state, on our streets. Sleeping on floors and couches, living in tents and railway cars. Causes + Effects - The Street Child Project. Children end up on the streets for a number of reasons, many of which are rooted in family instability and poverty. 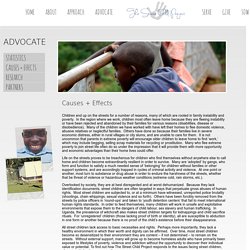 In the region where we work, children most often leave home because they are fleeing instability or have been rejected and abandoned by their families for various reasons (disabilities, disease or disobedience). Many of the children we have worked with have left their homes to flee domestic violence, abusive relatives or neglectful families. Others have done so because their families live in severe economic distress, either in rural villages or city slums, and are unable to care for them.

It is not uncommon that parents in extreme poverty will encourage older children to leave home to find ‘work,’ which may include begging, selling scrap materials for recycling or prostitution. Many who flee extreme poverty to join street life often do so under the impression that it will provide them with more opportunity and economic advantages than their home lives could offer.