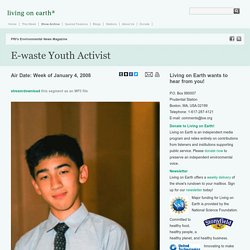 Lin recycled and refurbishes computers for kids in the U.S. and around the world. Transcript CURWOOD: One kid who needs no New Year’s resolutions on the environment is 14-year-old Alex Lin. When the electronic devices we use every day get taken apart or dumped, toxic substances, like lead, leech into the environment. And this year he received the prestigious Brower Youth Award for young environmental leaders. LIN: Thanks a lot. CURWOOD: So one day you’re reading the newspaper. LIN: I think what helped me choose to do this was that it’s such a little known problem, really. CURWOOD: So how many computers are you guys recycling? LIN: Recycling-wise we’re not really sure about the amount.

CURWOOD: So it’s what—5,000 pounds a month or something like that? High-Tech Trash. June is the wet season in Ghana, but here in Accra, the capital, the morning rain has ceased. 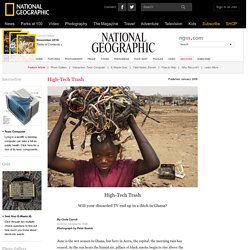 As the sun heats the humid air, pillars of black smoke begin to rise above the vast Agbogbloshie Market. I follow one plume toward its source, past lettuce and plantain vendors, past stalls of used tires, and through a clanging scrap market where hunched men bash on old alternators and engine blocks. Soon the muddy track is flanked by piles of old TVs, gutted computer cases, and smashed monitors heaped ten feet (three meters) high. Beyond lies a field of fine ash speckled with glints of amber and green—the sharp broken bits of circuit boards. I can see now that the smoke issues not from one fire, but from many small blazes.

Choking, I pull my shirt over my nose and approach a boy of about 15, his thin frame wreathed in smoke. People have always been proficient at making trash. Computers are hardly the only electronic hardware hounded by obsolescence. So what happens to all this junk? India's Environment Problem: Disposing Electronic Waste. The high-pitched, nasal call of the neighborhood scrap collector is a familiar weekend sound in most Indian neighborhoods. 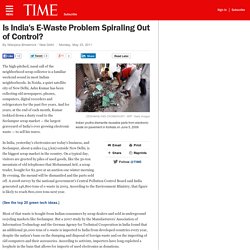 In Noida, a quiet satellite city of New Delhi, Ashu Kumar has been collecting old newspapers, phones, computers, digital recorders and refrigerators for the past five years. And for years, at the end of each month, Kumar trekked down a dusty road to the Seelampur scrap market — the largest graveyard of India's ever growing electronic waste — to sell his wares. In India, yesterday's electronics are today's business, and Seelampur, about 9 miles (14.5 km) outside New Delhi, is the biggest scrap market in the country. On a typical day, visitors are greeted by piles of used goods, like the 50-ton mountain of old telephones that Mohammad Arif, a scrap trader, bought for $2,500 at an auction one winter morning. By evening, the mound will be dismantled and the parts sold off. Piles of thrown-out TVs, laptops and phones pose an environmental risk. Christmas gifts from past years meet a sad end at Absolute Green Electronics Recycling in California. 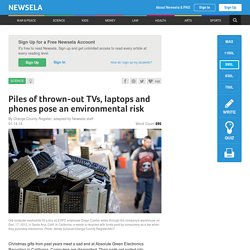 Computers are dismantled. Their parts get sorted into cardboard bins. One bin holds nothing but hard drives. Another holds AC adapters. Bins stretch in rows across a huge warehouse. Stacked-up printers form a miniature mountain. “There are different grades of boards,” said owner and president Victor Kianipay, stepping past dust-covered TVs to poke into apple boxes filled with circuit boards. Alex Lin - Turning E-Waste Into E-Treasure. Alex Lin was a boy who was just reading the newspaper one day. 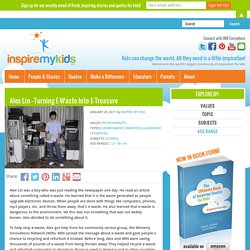 He read an article about something called e-waste. He learned that it is the waste generated as people upgrade electronic devices. When people are done with things like computers, phones, mp3 players, etc. and throw them away, that’s e-waste. He also learned that e-waste is dangerous to the environment. Yet this was not something that was not widely known. To help stop e-waste, Alex got help from his community service group, the Westerly Innovations Network (WIN). Additional Resources: Here is an article about Alex and his efforts.Here is an interview with Alex.Click here for more InspireMyKids stories about the environment.Find great books in our store, like Acting for Nature, about how children can help the environment.This video is about recycling e-waste. Topics for Discussion: Think about all the electronics families have. 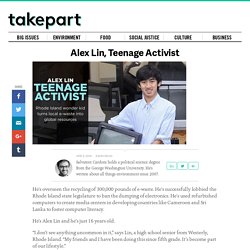 He's successfully lobbied the Rhode Island state legislature to ban the dumping of electronics. He's used refurbished computers to create media centers in developing countries like Cameroon and Sri Lanka to foster computer literacy. He’s Alex Lin and he’s just 16 years old. “I don’t see anything uncommon in it,” says Lin, a high school senior from Westerly, Rhode Island. “My friends and I have been doing this since fifth grade.

Lin’s catalytic moment came in 2004 when he chanced upon a Wall Street Journal article.