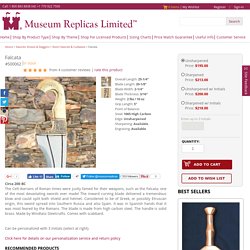 I have always wanted a falcata, and Windlass Steelcrafts did not disappoint! The sharp edge is incredible, and the heft of the weapon is what I expected it to be after all the studding of the item. The grip is very comfortable and well secured. The Brass really compliments the carbon blade. Completely functional, and beautiful to boot! Reviewed by Alex M I bought this on a deal of the day,as soon as it was offered, I had wanted it for awhile and I was not sorry I did,the blade is well crafted and if sharped cuts through targets easily,you can see why it was so widely used in ancient times by so many countries. 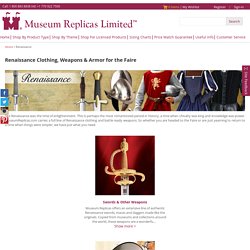 This is perhaps the most romanticized period in history, a time when chivalry was king and knowledge was power. MuseumReplicas.com carries a full line of Renaissance clothing and battle ready weapons. So whether you are headed to the Faire or are just yearning to return to a time when things were simpler, we have just what you need. Swords & Other Weapons Museum Replicas offers an extensive line of authentic Renaissance swords, maces and daggers made like the originals. Copied from museums and collections around the world, these weapons are a wonderfu... l addition to any weapons collection. Hats, Caps & Crowns Whether you are a civilian or a King, men were distinguished throughout history by the cap, hat or crown they wore. Windlass Steelcrafts Quality Edged Weapons.

Roman Body Armor, Roman Weapons & Clothing. Half a century before the dawn of Christianity, the Roman Empire had become the richest nation the world had ever seen. 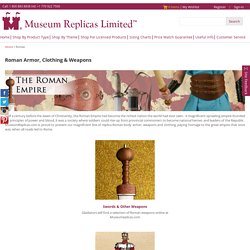 A magnificent sprawling empire founded on principles of power and blood, it was a society where soldiers could rise up from provincial commoners to become national heroes and leaders of the Republic. MuseumReplicas.com is proud to present our magnificent line of replica Roman body armor, weapons and clothing, paying homage to the great empire that once was, when all roads led to Rome. Swords & Other Weapons Gladiators will find a selection of Roman weapons online at Museumeplicas.com Armor Armor for the Legions of Rome and all the proper historical accessories can be found at MuseumReplicas.com. Viking Costumes & Weapons. The feared Vikings took to sea from Scandinavia in their longships for many reasons; to explore, to trade and to plunder. 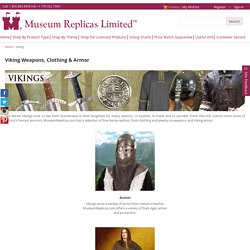 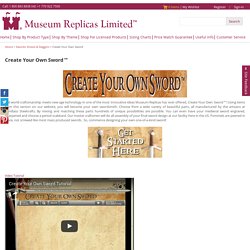 Using items from this section on our website, you will become your own swordsmith. Choose from a wide variety of beautiful parts, all manufactured by the artisans at Windlass Steelcrafts. By mixing and matching these parts hundreds of unique possibilities are possible. You can even have your medieval sword engraved, sharpened and choose a period scabbard. Mens Medieval Clothing, Medieval Costumes for men - Museum Replicas. Museum Replicas carries a full line of high quality medieval costumes, shoes and accessories for men. 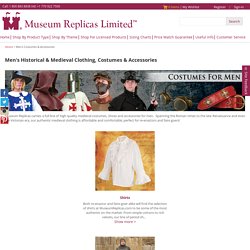 Spanning the Roman times to the late Renaissance and even the Victorian era, our authentic medieval clothing is affordable and comfortable; perfect for re-enactors and faire goers! Shirts Both re-enactor and faire-goer alike will find the selection of shirts at MuseumReplicas.com to be some of the most authentic on the market. Knives & Daggers - Museum Replicas. Swords and Weapons - Museum Replicas. Childrens Medieval Clothing, Kids Costumes Online at MuseumReplicas.com. We don’t want to forget the little ones when dressing for the Faire! 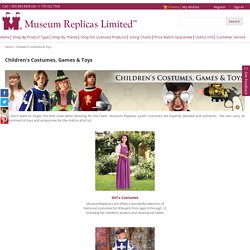 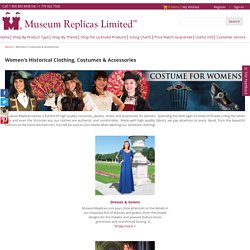 Spanning the Dark Ages to times of Pirates ruling the seven seas and even the Victorian era, our clothes are authentic and comfortable. Made with high quality fabrics, we pay attention to every detail, from the beautiful buttons to the hand stitched trim. You will be sure to turn heads when wearing our authentic clothing! Dresses & Gowns MuseumReplicas.com pays close attention to the details in our exquisite line of dresses and gowns. Even the simple designs for the maiden and peasant feature brass grommets and re-enforced boning. Womens Accessories Our accessories range from hair daggers and belts to masks and leather pouches. Women’s Medieval Costumes, Period Clothing, Medieval & Renaissance Faire Garb. Latex LARP Weapons. Sacred Relics and Treasures. There are some objects in history that transcend past, present and future. 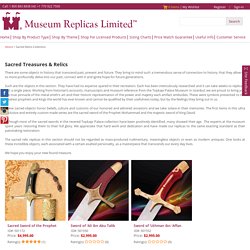 They bring to mind such a tremendous sense of connection to history that they allow us to more profoundly delve into our past, connect with it and ignite hope for future generations. Such are the objects in this section. They have had no expense spared in their recreation. Each has been meticulously researched and it can take weeks to replicate just a single piece. Working from historian’s accounts, manuscripts and museum reference from the Topkapi Palace Museum in Istanbul, we are proud to bring you the true pinnacle of the metal smith’s art and their historic representation of the power and majesty each artifact embodies. These sacred objects honor beliefs, culture and customs of our honored and admired ancestors and we take solace in their memories.

Although most of the sacred swords in the revered Topkapi Palace collection have been positively identified, many showed their age. Display & Care. Fantasy swords, Fantasy Armor & Weapons, Fantasy Costumes. Fantasy Swords & Other Weapons.