Here is a collection of resources about nuclear arms. 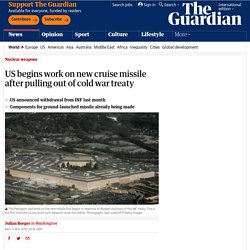 The Trump administration declared on 1 February it was no longer bound by the Intermediate-range Nuclear Forces (INF) treaty and would withdraw completely in August, pointing to the deployment of a new Russian missile which the US has complained for more than six years was a violation of the agreement. Vladimir Putin suspended Russian INF obligations a month later. Michelle Baldanza, a Pentagon spokeswoman, said on Monday that fabrication had begun on components for a new ground-launched cruise missile (GLCM), which was first reported by Aviation Week. 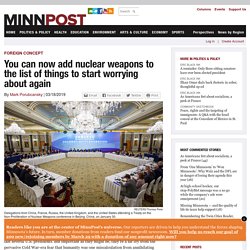 Sure, the nuclear ambitions of North Korea and Iran have been major headaches for the last several U.S. presidents. But important as they might be, they’re a far cry from the pervasive Cold War-era fear that humanity was one miscalculation from annihilating itself. Instead, Washington and Moscow slowly built some trust through arms control treaties.

Then, the end of the Cold War seemingly put all that behind us. Even if they each retain more than 6,000 warheads, few people really worry that the United States and Russia might actually use them. But the arms control edifice is breaking down. Everything still starts with the Americans and the Russians, who according to the Arms Control Association, possess about 90 percent of the world’s estimated 15,000 nuclear warheads. Over decades, Washington and Moscow agreed to bilateral treaties on anti-ballistic missiles, long-range strategic and intermediate-range weapons. Whatever happened to nuclear abolition? Human Error in Volatile Situations. Stuxnet: Computer worm opens new era of warfare. Game by Donald Barthelme (Read by T.C. Boyle) 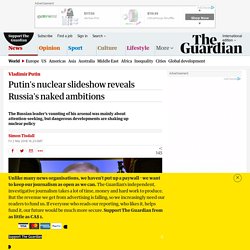 But the latest display of naked power by Russia’s president was delivered fully clothed before a well-dressed, adoring audience in a Moscow exhibition centre. It was quite a show. In what amounted to a state-of-the-nation address, he hailed a new generation of Russian intercontinental ballistic missiles, underwater drones and nuclear-powered cruise missiles. Russia’s revamped arsenal would prove “invincible”, Putin declared. US attempts to build missile shields – and it was the US all this was aimed at – would be rendered futile.

He enthused about “hypersonic” missiles hitting targets with the “speed of a meteorite” and weapons named “Dagger” and “Satan”. There was a touch of the showman about the performance that the Gipper would have recognised. “They have not succeeded in holding Russia back,” Putin said, harking back to the US decision in 2002 to abrogate the Anti-Ballistic Missile (ABM) treaty. Nationalreview. Soviet Officer Stanislav Petrov, 'The Man Who Saved The World,' Dies At 77. Stanislav Petrov, a former Soviet military officer, poses at his home in 2015 near Moscow. 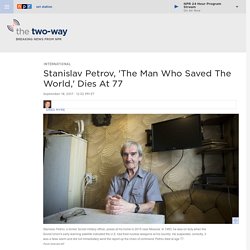 In 1983, he was on duty when the Soviet Union's early warning satellite indicated the U.S. had fired nuclear weapons at his country. He suspected, correctly, it was a false alarm and did not immediately send the report up the chain of command. Petrov died at age 77. Pavel Golovkin/AP hide caption toggle caption Pavel Golovkin/AP Stanislav Petrov, a former Soviet military officer, poses at his home in 2015 near Moscow. Stanislav Petrov was a lieutenant colonel in the Soviet Union's Air Defense Forces, and his job was to monitor his country's satellite system, which was looking for any possible nuclear weapons launches by the United States. 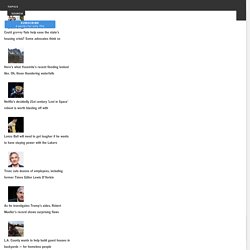 In his many reporting assignments, he has written on Toyota vehicle defects, presidential candidates, the New Orleans levee failures, the defense industry, the Columbia space shuttle accident investigation, nuclear weapons, tax collection abuses, and the California bullet train, among much else.He won the2015 Gerald Ford PresidentialFoundation award for defense writing, as well asLoeb awards in 1987 and 2010. Hewas also a Pulitzer finalist in 2010, among many other career recognitions. In 1989, the Delta Mu Delta honorary society at California Polytechnic University school of business gave Vartabedian a special award for integrity. He covered aerospace and defense issues for 10 years at The Times, covering the military buildup that preceded the end of the Cold War and its decline afterward. Donald Trump thinks more countries should have nuclear ...