3.8 - How teenage markets are revitalising UK towns. When Mary Portas bought a hand-made cuddly toy from her stand, 18-year-old Christine McDonald knew that forfeiting a Saturday morning lie-in to set up her market stall had been worth it. 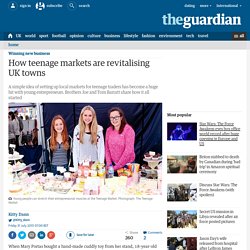 Browsing her stall, Portas told McDonald to hike her prices up, advice that the young trader has taken on board. Now 22, McDonald is preparing to start selling her products from a shop in Stockport town centre – but she wouldn’t be where she is today without her debut at the Teenage Market, an event set up by brothers Joe and Tom Barratt to breathe new life into flagging UK markets. The business partners, now 22 and 21, were in their teens when they set up the Teenage Market – which gives young people a free platform to trade at specially organised events – three years ago. Inspired by fair the Vintage Village, the Stockport-based brothers decided to organise a pop-up style market trading event for young people in their home town. “Market trading is a great way into entrepreneurship. 3.8 LEGO Surprisingly Wants You to Stop Buying Its Toys. Here's Why. 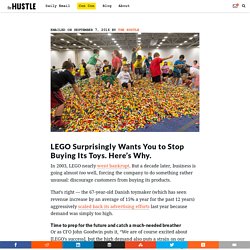 But a decade later, business is going almost too well, forcing the company to do something rather unusual: discourage customers from buying its products. That’s right — the 67-year-old Danish toymaker (which has seen revenue increase by an average of 15% a year for the past 12 years) aggressively scaled back its advertising efforts last year because demand was simply too high. Time to prep for the future and catch a much-needed breather Or as CFO John Goodwin puts it, “We are of course excited about [LEGO’s success], but the high demand also puts a strain on our factories… We feel we need to invest, to build some breathing space.” So that’s what LEGO’s doing. They’re hiring like crazy, too. Take a step back, retool for the future, and continue towards the ultimate, long-term mission of serving as many children, in as many parts of the world, as possible.

And by the way… 3.8 Long-term Strategy & The Mittelstand - Sennheiser. 3.8.1 Uber and The Pros and Cons of Product (or Service) Development. Before we get started, Harley Davidson’s stock symbol is HOG. 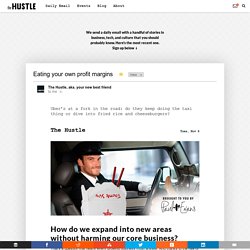 That’s amazing. Okay, back to the script. For the 8th consecutive quarter, the motorcycle company synonymous with Americana, leather jackets, and open roads posted a decrease in year-over-year sales. Turns out young people prefer the faster, sportier “crotch rockets” to the big, brawly Harley’s. And while the introduction of a new Milwaukee-Eight engine in August (their first in 15 years) increased sales slightly, that’s not enough to turn things around.

An “old, white guy brand” When Easy Rider premiered nearly a half century ago, Peter Fonda and Dennis Hopper rode out on their custom Harleys and introduced America to bad boy cool. 3 8 1 Boston Matrix Overview. 3.8.1 The Body Shop: What went wrong? "A confused shop with a mish-mash of products with no emphasis on the fact that this is supposed to be a shop specialising in cruelty-free, fair trade toiletries and make-up," is Suzy Bourke's damning verdict on The Body Shop. 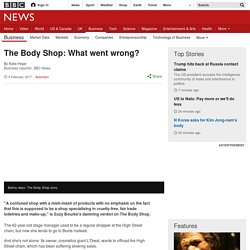 The 42-year-old stage manager used to be a regular shopper at the High Street chain, but now she tends to go to Boots instead. And she's not alone. Its owner, cosmetics giant L'Oreal, wants to offload the High Street chain, which has been suffering slowing sales. The Body Shop, founded by Dame Anita Roddick in 1976, was a pioneer using natural ingredients for its beauty products when it started out.

It initially thrived, expanding rapidly, and by the 1980s was one of the most well-known brands on the High Street. I remember the chain fondly from my youth, when it seemed to be an exciting shop full of affordable, fun and exciting products. 3.8.1 Chemical giant Ineos to build heir to Land Rover Defender. 3.8.1 Importance-marketing-strategy-organisation. 3.8.1 Marketing Strategy: A&F Struggles To Reposition Itself With Ex-Teenagers. 3 8 1 Marketing Planning Summary. 3.8.1 Boston Matrix, Culture and Dividend Yield. 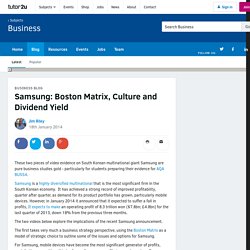 Samsung is a highly diversified multinational that is the most significant firm in the South Korean economy. It has achieved a strong record of improved profitability, quarter after quarter, as demand for its product portfolio has grown, particularly mobile devices. However, in January 2014 it announced that it expected to suffer a fall in profits, It expects to make an operating profit of 8.3 trillion won ($7.8bn; £4.8bn) for the last quarter of 2013, down 18% from the previous three months. The two videos below explore the implications of the recent Samsung announcement. The first takes very much a business strategy perspective, using the Boston Matrix as a model of strategic choice to outline some of the issues and options for Samsung. 3.8.1 Market Cannibalism at McD's. 3.8.2. How chat apps are transforming the global conversation. 3.8.2 - Flying first class? Differentiation. 3.8.1 Ten years after the smoking ban, vaping is a £1bn business.

Mark Twain, so the story goes, used to joke that giving up smoking was the easiest thing in the world – after all, he had done it “thousands of times”. 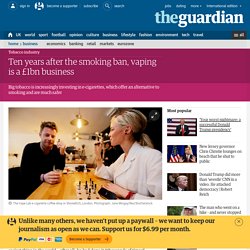 The US novelist, though, did not have the option of e-cigarettes – the quitting phenomenon that started in the US and is now a rapidly growing business here with its own “cloud-chasing” subculture . UK sales of vaping products surged 50% last year to reach £1bn, and are on course to exceed £2bn by 2020. It is 10 years ago this weekend that laws came into effect banning smoking in virtually all enclosed public places in England. According to Cancer Research UK there are now 1.9 million fewer smokers in Britain compared with when the smoking ban was introduced – the lowest smoking rates ever recorded in Britain. 3.8.2 Tencent’s WeChat dominates China’s lucrative messaging app market. The room was sombre as Pony Ma, Tencent chairman, addressed the assembled group of engineers. 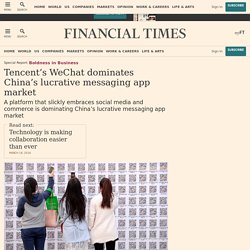 It was sometime in 2010, according to the recollection of people who were there, and he was talking about Tencent’s latest bet on social media. The company was losing the microblogging wars. 3.8.2 Global niche players.