Manufacturing in the UK 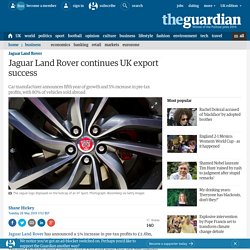 The west Midlands-based company said it had sold more than 460,000 vehicles during the period, with more than eight out of 10 of those cars sold abroad. China is JLR’s biggest market, followed by mainland Europe, the UK and north America. A statement said this was the fifth year of growth for the company, a period during which sales and employment at the company had doubled. During the financial year from April 2014 to the end of March this year, the company unveiled three new Jaguar models. Revenues were £21.9bn, up £2.5bn on the previous year. “The past year has been one of significant achievement, with the expansion of our vehicle ranges and our manufacturing footprint,” said Dr Ralf Speth, chief executive of JLR. Jaguar Land Rover continues UK export success. Jaguar Land Rover has announced a 5% increase in pre-tax profits to £2.6bn, confirming the car maker as one of Britain’s biggest export successes. 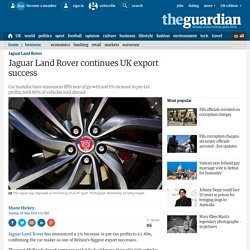 The west Midlands-based company said it had sold more than 460,000 vehicles during the period, with more than eight out of 10 of those cars sold abroad. China is JLR’s biggest market, followed by mainland Europe, the UK and north America. UK manufacturing slowdown deals blow to Conservatives. Britain’s manufacturers reported a sharp slowdown in growth last month, according to a closely watched business survey that will come as a blow to the Conservatives ahead of the election. 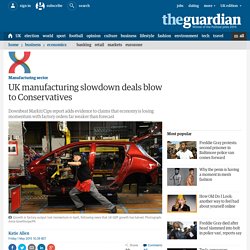 With less than a week to go until polling day, the downbeat manufacturing report by Markit/CIPS adds to evidence that the economy has lost momentum in recent months. Lack of skilled workers driving up salaries, report says. Skills shortages are driving increases in pay, with almost a third of recruitment agencies reporting improved starting salaries, according to a study. 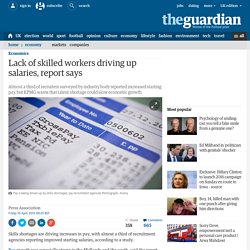 Exchange Rates, Costs and Competitiveness - Making the Link. There is a link between two recent news stories about the UK economy which provide an opportunity to discuss the impact of changes in the economic environment on UK business competitiveness. 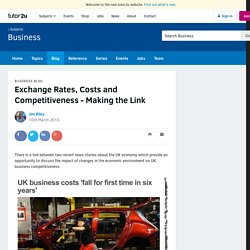 First up is this story from the BBC which reports a fall in business costs for the first time in six years. Pointing to the impact of lower oil prices, the survey reported indicates that UK firms are now benefitting from lower input costs which should therefore enable them to achieve higher profit margins. Low cost pressure is linked by the survey to growing business confidence, which in turn might be expected to result in greater business investment.

Building a supersonic car. Rolls-Royce warns on 2015 profit. 13 February 2015Last updated at 14:44 ET Rolls-Royce has warned that its profits for this year could be as much as 13% lower than last year. 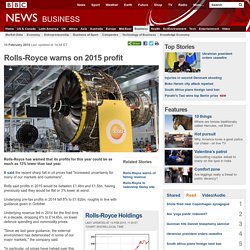 It said the recent sharp fall in oil prices had "increased uncertainty for many of our markets and customers". Rolls said profits in 2015 would be between £1.4bn and £1.5bn, having previously said they would be flat or 3% lower at worst. BUSS4 Section A. Jaguar Land Rover looks into Saudi car production. Jaguar Land Rover's next overseas move could result in its vehicles being manufactured in Saudi Arabia after the premium carmaker agreed to study the case for building cars in the country. 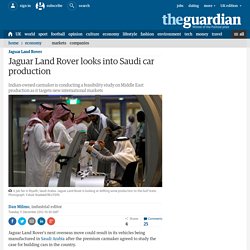 JLR has started work on a factory in China, to open what would be its first full manufacturing facility outside the UK, and has signalled that the Middle East could be next. The Indian-owned company has agreed to conduct a "feasibility study" with Saudi Arabia's National Industrial Clusters Development Program – a government body charged with securing investment in five industrial sectors including car making. JLR has indicated that its UK expansion, which includes a move to 24-hour operation at its Halewood plant, has reached a limit for now and that it will target overseas markets. JLR's chief executive, Ralf Speth, said Saudi Arabia was an "attractive" option. He added: "We are committed to further international partnerships to meet record demand for our highly sought after vehicles. " AQA BUSS4 PM Jun15. BUSS4 2015 Manufacturing Research Bullet Summary Amended. 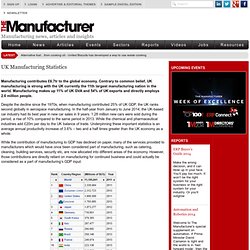 North West manufacturing M&A deals fall but region is still UK number two. The North West region maintained its number two position for manufacturing merger and acquisition (M&A) activity during 2014 compared to other regions in England despite a slight fall in the number of completed deals during the year, says a new report. 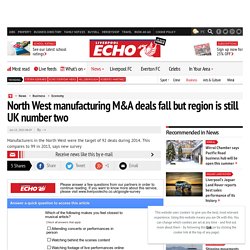 According to the latest data and analysis from Experian on behalf of law firm, Irwin Mitchell, manufacturers in the North West were the target of 92 deals during 2014. This compares to 99 in 2013. UK manufacturing growth falls to three-month low. Growth in the UK’s manufacturing sector slowed at the end of 2014, raising further doubts about the government’s success in rebalancing the economy away from property, services and shopping. 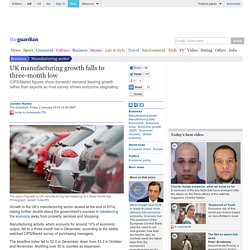 Manufacturing activity, which accounts for around 10% of economic output, fell to a three-month low in December, according to the widely watched CIPS/Markit survey of purchasing managers. The headline index fell to 52.5 in December, down from 53.3 in October and November. Anything over 50 is counted as expansion. Although manufacturing activity has now increased for 22 straight months in a row, the slowdown is a blow to government hopes of boosting British exports, a key plank of a rebalancing drive that is supported by the three mainstream political parties.

Manufacturing businesses continued to win new orders, but largely as a result of domestic demand, rather than export orders. UK Manufacturing Decline Richard Koo - Business Insider. Markit: UK manufacturing activity hits three-month low. 2 January 2015Last updated at 05:32 ET Manufacturing activity in the UK hit a three-month low in December, a survey has suggested. The Markit/CIPS Purchasing Managers' Index was at 52.5 for the month, compared with 53.3 in both October and November. A figure above 50 suggests that the sector is growing. U.K. Factories in ‘Ongoing Slowdown’ as Export Demand Stagnates. U.K. manufacturing unexpectedly slowed to a three-month low in December as weak growth in overseas markets such as the euro area undermined demand. Markit Economics said its Purchasing Managers’ Index fell to 52.5 from a revised 53.3 in November. A reading above 50 indicates expansion.

Economists forecast the gauge would rise to 53.6 from a previously reported 53.5 in November, according to the median of 28 estimates in a Bloomberg News survey. The report showed overseas orders stagnated in December, further highlighting Britain’s dependency on domestic demand. Bank of England policy makers will probably leave their benchmark interest rate unchanged at a record-low 0.5 percent on Jan. 8 after they cut their economic forecasts in November, citing “subdued external demand.” 2014 BUSS4 Grid Template 2015. Nottingham cigarette factory closure threatens more than 500 jobs Business theguardian. EEF BackingBritainReport2014. Rolls-Royce to cut 2,600 jobs. 4 November 2014Last updated at 16:58 ET Engineering group Rolls-Royce has said it is planning to cut 2,600 jobs over the next 18 months. It said most of the jobs would go in its aerospace division, with most of the posts being shed in 2015. It is not clear where the cuts will be made from Rolls-Royce's global workforce of 55,000, 24,000 of whom are in the UK.

However, the Unite union told the BBC there would be 800-1200 engineering jobs cut in Derby and Bristol. Rolls-Royce also said Finance Director Mark Morris leaves after 27 years with the firm and would be replaced by David Smith, who is promoted from finance director of the Aerospace division. The company's chief executive John Rishton said: "The measures announced today will not be the last, however they will contribute towards Rolls-Royce becoming a stronger and more profitable company. " Last month, Rolls warned that its underlying revenues for 2014 would be 3.5-to-4% lower than expected.