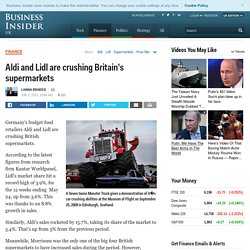 Germany's budget food retailers Aldi and Lidl are crushing British supermarkets. According to the latest figures from research firm Kantar Worldpanel, Lidl's market share hit a record high of 3.9%, for the 12 weeks ending May 24, up from 3.6%. This was thanks to an 8.8% growth in sales. Similarly, Aldi's sales rocketed by 15.7%, taking its share of the market to 5.4%. Tutor2u Business sur Twitter : "The well-prepared #buss4 student in June 2015 will be ready to refer to Germany's Mittelstand. Organisational Culture: Lessons in Long-Term Business Success from Germany’s Mittelstand. What is the link between organisational culture and long-term, sustained business success? 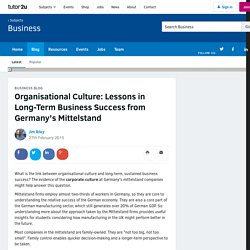 The evidence of the corporate culture at Germany's mittelstand companies might help answer this question. Mittelstand firms employ almost two-thirds of workers in Germany, so they are core to understanding the relative success of the German economy. FedEx to buy rival TNT Express for €4.4bn - BBC News. US parcels delivery firm FedEx is to buy its Dutch rival TNT Express for €4.4bn ($4.8bn; £3.2bn) as it looks to expand its European operations. 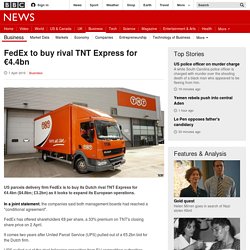 In a joint statement, the companies said both management boards had reached a "conditional agreement". FedEx has offered shareholders €8 per share, a 33% premium on TNT's closing share price on 2 April. It comes two years after United Parcel Service (UPS) pulled out of a €5.2bn bid for the Dutch firm. UPS pulled out of the deal following opposition from EU competition authorities, saying it saw "no realistic prospect" of approval for its bid from the European Commission. Royal Dutch Shell to buy BG Group in £47bn deal - BBC News. Amazon EU Sarl paid too little tax, EU competition regulator says. Amazon’s main European trading company that accounts for a fifth of the online retailer’s worldwide sales has been paying too little tax for years, European competition regulators have said. 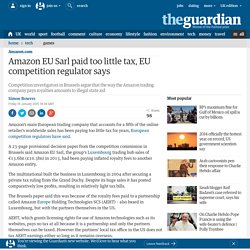 A 23-page provisional decision paper from the competition commission in Brussels said Amazon EU Sarl, the group’s Luxembourg trading hub sales of €13.6bn (£10.3bn) in 2013, had been paying inflated royalty fees to another Amazon entity. The multinational built the business in Luxembourg in 2004 after securing a private tax ruling from the Grand Duchy. Despite its huge sales it has posted comparatively low profits, resulting in relatively light tax bills. Dairy farmers payment delayed as milk becomes cheaper than water. More than 1,000 farmers will not be paid for their milk on Monday, after the UK’s largest dairy company announced it was delaying payments because of a crash in prices. 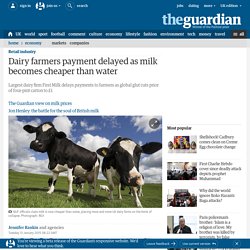 First Milk, a co-operative owned by British farmers, said 2014 had been a “year of volatility that has never been seen before” in the global dairy industry. It will delay Monday’s payments to farmers by two weeks and all subsequent payments by a fortnight. Sir Jim Paice, the Conservative MP who is chairman of First Milk, said: “We are a business owned by dairy farmers. The board are acutely aware of the difficulties this current extreme volatility is causing First Milk members and the UK dairy industry.”

Types of Internal Organizational Change: Structural, Strategic, People, and Process - Video & Lesson Transcript. Tesco chief unveils dramatic shakeup at troubled supermarket. The new chief executive of Tesco has announced a dramatic overhaul of the troubled supermarket chain that will involve the closure of its longstanding head office, thousands of job cuts and the closure or abandonment of nearly 100 stores. 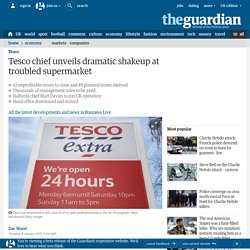 Dave Lewis, who joined from Unilever in September, lived up to the nickname “drastic Dave” earned at the consumer goods giant by announcing a raft of major changes, including the poaching of well-regarded Halfords boss Matt Davies to lead the turnaround. Lewis declined to put a figure on potential job losses but admitted: “This is a significant restructuring of a significant-sized business.” In a sign that significant job cuts are on the cards at the UK’s biggest private sector employer, which has 314,000 staff and a total worldwide workforce of 500,000, Lewis said he wanted to cut central overheads by 30%.

Manufacturing in the UK 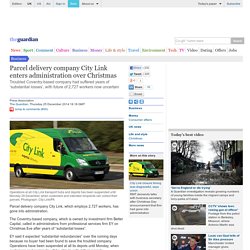 The Coventry-based company, which is owned by investment firm Better Capital, called in administrators from professional services firm EY on Christmas Eve after years of “substantial losses”. EY said it expected “substantial redundancies” over the coming days because no buyer had been found to save the troubled company. Osborne moves to cut spending to 1930s levels in dramatic autumn statement. The chancellor, George Osborne, has set out dramatic plans to move Britain from the red into the black that will see public spending as a percentage of GDP fall to its lowest level since the 1930s and could require cuts in non-protected departments such as police, local government and justice amounting to a further £60bn by 2019-20. 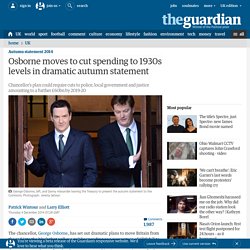 The plans, according to the Treasury spending watchdog, the Office for Budget Responsibility, also presume the loss of a further one million public sector jobs by 2020, a renewed public sector pay squeeze and a further freeze on tax credits. BT in talks with Telefónica to buy O2 in plan for EU-wide mobile alliance. BT is considering buying back O2, the mobile phone operator it owned until 2001, in a deal that would reverse what has been described as one of the worst strategic errors in UK corporate history. 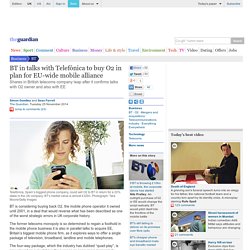 The former telecoms monopoly is so determined to regain a foothold in the mobile phone business it is also in parallel talks to acquire EE, Britain’s biggest mobile phone firm, as it explores ways to offer a single package of television, broadband, landline and mobile telephones. The four-way package, which the industry has dubbed “quad-play”, is now viewed as a must-have for success as consumers increasingly prefer to get all their telecoms, television and digital services from one place. BT’s move comes just two years after it unexpectedly marched into the TV business, putting £2bn on the table to secure key sports rights, including Premier League football.

A year later it put up £900m for the rights to screen the Champions League. Tesco slashes October ad spending. Tesco cut its spending on TV and press advertising by nearly two-thirds in October, putting it well behind Asda, Aldi and Lidl, which launched their Christmas campaigns last month. 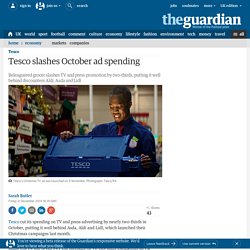 The UK’s biggest supermarket, which controls nearly a third of UK grocery sales, spent just £2.9m of the £34.6m splashed on TV and press advertising by UK grocers in the four weeks to 9 November, according to Nielsen, a market research firm. Five banks fined £2bn for foreign exchange rigging. M&S clothing sales hit by warm weather but profits rise. Clothing sales at Marks & Spencer have fallen for the 13th consecutive quarter, as the unseasonably warm autumn weather deterred consumers from buying winter clothes at the high street retailer. However, the group surprised the City by reporting a rise in underlying first-half profits, which rose by 2.3% to £268m – the first increase in four years – thanks to higher margins and lower costs.

It is also increasing its dividend payment to shareholders for the first time since 2010, with an interim payment of 6.4p, up from 6.2p. Although sales are still in decline, analysts said the figures were better than expected, and shares in the group jumped 8% to 438p in early trading. Lego 'won't renew' contract with Shell after Greenpeace campaign. 10 October 2014Last updated at 01:40 ET.

Tesco ditches plans to build huge superstore on Margate seafront. Tesco has ditched plans to build a huge superstore on Margate’s seafront in the latest sign of the troubled supermarket’s retreat from aggressive expansion. Campaigners have lobbied hard to prevent Tesco opening the store in Kent. Last year the development was approved by communities secretary Eric Pickles, and a judicial review was pending to rule on whether planning permission for the scheme was properly considered ahead of that approval.

However, the ailing supermarket group has now written to the site’s landlord, Freshwater Developments, to terminate its contract to operate the 82,000sq ft store. Tesco, which has two smaller stores in Margate, said its change of plan was the result of shoppers switching from large stores towards neighbourhood outlets and the internet. “We are reducing the number of large stores we open each year as a result of changing customer shopping habits. The Journey of milk from Cow to Nestle's Kit Kat. Wonga to write off debts of £220m for 330,000 customers. Ryanair’s O’Leary admits it’s nice to be nice.

Welcome to Forbes. Phones 4u has only itself to blame. How to Improve Your Company Culture. Sustainability Culture Saves DuPont Billions. Upwards of 40 percent of industry’s energy efficiency improvement opportunities can be realized through low or no-cost projects rooted in corporate culture change, according to a white paper from DuPont. In Optimizing the Success of Industrial Energy Efficiency Improvement Programs By Driving Culture Change, global practice leaders Davide Vassallo and Chris Smith, both of DuPont Sustainable Solutions, say the company has found this to be true in its experience as the owner/operator of more than 150 diverse production facilities around the world. WhatsApp: Facebook acquires messaging service in $19bn deal.

GlaxoSmithKline to pay £297m fine over China bribery network. A GlaxoSmithKline office in Beijing. Cameron's 'devolution revolution': what could it mean for the UK? – Q&A. Ebay announces it will spin off PayPal into separate business. Online auction site eBay plans to spin off its PayPal business into a separate publicly traded company next year, the company announced on Tuesday. The surprise move comes after the company had rebuffed calls from billionaire hedge fund investor Carl Icahn to sell off its online payments business.

The decision comes shortly after Apple unveiled a new mobile payment system, Apple Pay, that looks set to be a fierce rival to PayPal and Alibaba, China’s massive online marketplace, debuted on the New York Stock Exchange. “The industry landscape is changing, and each business faces different competitive opportunities and challenges,” eBay chief executive John Donahoe said in a news release. Donahoe won’t have an executive role at either company. Devin Wenig, current president of eBay Marketplaces, will be the chief executive of the new eBay, while American Express executive Dan Schulman will lead the PayPal. Shares for eBay surged about 9% ahead of the stock market opening. BT says EE merger would create digital champion for UK.