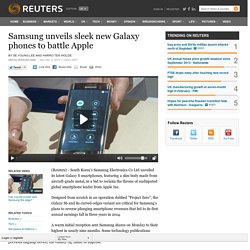 Designed from scratch in an operation dubbed "Project Zero", the Galaxy S6 and its curved-edges variant are critical for Samsung's plans to reverse plunging smartphone revenues that led to its first annual earnings fall in three years in 2014. A warm initial reception sent Samsung shares on Monday to their highest in nearly nine months. Some technology publications described the phones as Samsung's best-looking to date after its previous flagship device, the Galaxy S5, failed to impress. The shares closed up 4.9 percent, outperforming a 0.6 percent rise for the broader market. "We listen to our customers and we learn from our missteps," J.K. Black Friday promises high street stores a £200m Christmas present.

Retailers have drafted in extra shopfloor and security staff to control the anticipated crowds of shoppers as they prepare for the American-style Black Friday shopping mania due to sweep Britain’s high streets this week. 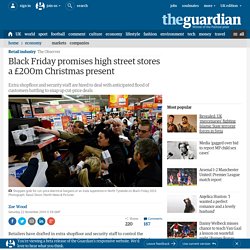 The 24-hour sales bonanza imported from the US has become big business in the UK, with store bosses predicting that sales rung up on Friday will be double those of last year, at around £200m. Some of the high street’s biggest names, including John Lewis, Asda, Currys and Argos, will launch thousands of deals. Tens of thousands of shoppers are expected to queue outside supermarkets and shopping centres in the early hours of Friday to get their hands on aggressively discounted TVs, tablets and smartphones. Just as many are expected to log on from their beds, with John Lewis among the retailers launching deals at a minute past midnight. Amazon introduced Black Friday discounts to Britain in 2010 and last year other high-street retailers followed suit. Jaffa Cakes and McVitie’s maker sold to Turkish food group in £2bn deal. United Biscuits, maker of McVitie’s and Jaffa Cakes, has been swallowed by a Turkish food group in an estimated £2bn deal that will create the world’s third-largest biscuit manufacturer. 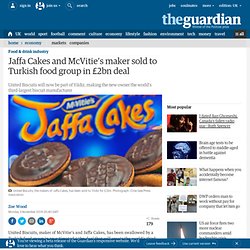 Yildiz, the new owner, promised it would invest in the Middlesex-based firm, which has a 4,600-strong domestic workforce, with the chairman, Murat Ülker, tweeting: “United Biscuits is our new star.” In a statement, he added: “We want to grow United Biscuits to be a global player as part of Yildiz. This will include enhancing its position in the UK, where Yildiz currently has minimal presence, so we will continue to invest in the UK and Europe.” Yildiz, which owns Belgium’s Godiva Chocolate, is thought to have fought off competition from Kellogg’s in the US and rival biscuit maker Burton’s. United Biscuits employs about 7,100 people in total with about 4,600 in the UK at sites including London, Manchester, Carlisle, Glasgow, Halifax, Liverpool and Leicestershire. Asda faces mass legal action from staff over equal pay. Asda is facing mass legal action from thousands of female employees who claim they are paid less than men to do equally valuable jobs at the supermarket chain. 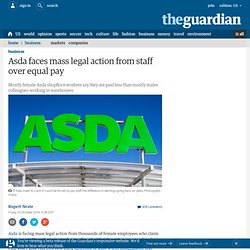 Law firm Leigh Day said that since revealing in April it was representing 400 Asda employees it had been approached by more than 19,000. The mostly female Asda shopfloor staff claim they are underpaid compared with mostly male colleagues working in the supermarket’s warehouses. The case could become the largest ever employment claim in the private sector, the lawyers said. If Asda, which employs 170,000 staff working across 370 stores and 23 depots, loses the claim it could be forced to pay staff the difference in earnings going back six years.

Michael Newman, a discrimination and employment law expert at Leigh Day, said: “In the supermarkets the checkout staff and shelf-stackers are mostly women. If the legal action succeeds other supermarkets who also own their distribution centres may face similar claims. BUSS3 Revision Booklet (Revised Version) Exam Technique: Maximise your Marks in BUSS3. Sunday, January 13, 2013 PrintEmailTweet This! 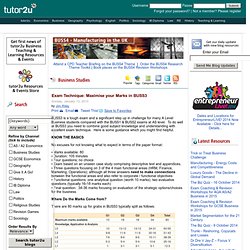 Save to Favorites BUSS3 is a tough exam and a significant step up in challenge for many A Level Business students compared with the BUSS1 & BUSS2 exams at AS level. To do well at BUSS3 you need to combine good subject knowledge and understanding with excellent exam technique. Here is some guidance which you might find helpful. No excuses for not knowing what to expect in terms of the paper format: Where Do the Marks Come from? There are 80 marks up for grabs in BUSS3 typically split as follows: Note that Q4 has up to 10 marks available for evaluation.

In total there are up to 20 marks (or 25%) available for evaluation. There is no point producing answers that you’ve pre-prepared. Do not produce theoretical answers that are straight out of the textbook!