How can I target my product at different markets and retailers? Hello James,I have recently been advised by a mentor to focus on one target customer and one area of selling, however my product can be used in a number of different areas. 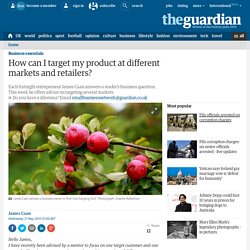 How do I market one product to different markets and different retailers? Sue Although you don’t want to pigeonhole yourself, focusing on a specific sector can be the best way to scale a business because you’re able to master client needs and become an expert in your field. Perfecting one area means you can put all your energy into making it a success without the potential distraction of having your fingers in lots of pies. The difficulty you’ll have targeting several sectors and audiences is the urge to be everything for everyone. However, with a lot of hard work, research and dedication, I’m sure it can be done. Ryanair profits soar 66% as charm offensive reaps rewards. Ryanair’s annual profit jumped by two-thirds as low fuel prices drove down costs, with passenger numbers growing on the back of lower fares and a successful campaign to transform the Irish airline’s brutal image of old. 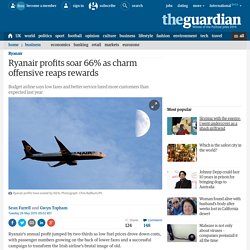 The low-cost carrier more than tripled its target for additional passengers as net profit for the year to the end of March increased 66% to €867m (£613m). 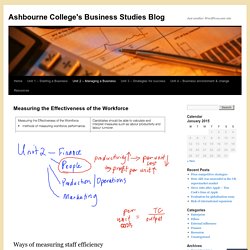 Labour productivity Question: Why labour productivity is important? It shows how efficient staff are, which affects per unit costs (AC).It helps managers to see whether training is needed or how staff are paid needs to be changed in order to increase motivation. Why will an increase in labour productivity help reduce per unit costs (average costs)? AC = TC / output If productivity increases, TC are spread over more units of output so ACs fall. 2. Question: Why is high labour turnover a problem? Productivity will fall and AC will riseHigh recruitment costs to replace staffIt indicates low morale and motivationPoor customer serviceIt may damage the firm’s image and customer loyalty. 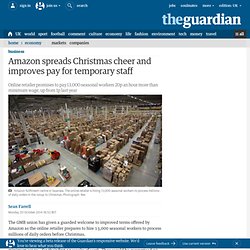 Amazon said it would pay the temporary staff £6.70 an hour – 20p more than the minimum wage – for their first 12 weeks of work. They would be guaranteed 20 hours’ pay a week and “the vast majority” would work 40-hour weeks, it said. Dan Pink: The puzzle of motivation. Developing Exam Skills - Better use of the case study. Wednesday, May 08, 2013 PrintEmailTweet This! 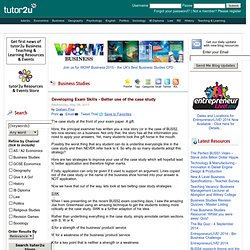 Save to Favorites The case study at the front of your exam paper. A gift. Here, the principal examiner has written you a nice story (or in the case of BUSS2, two nice stories) on a business. BUSS2 Exam Technique: Analysis – Limited, Reasonable or Good? Thursday, May 03, 2012 PrintEmailTweet This! 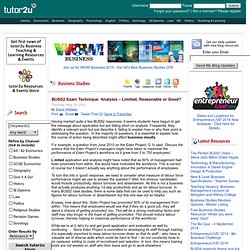 Save to Favorites Having marked quite a few BUSS2 responses, it seems students have begun to get the message about application but are falling short on analysis. Frequently, they identify a relevant point but just describe it, failing to explain how or why their point is addressing the question. In the majority of questions, it is essential to explain how the course of action being described might affect business results. For example, a question from June 2010 on the Eden Project, Q 1c said: ‘Discuss the actions that the Eden Project’s managers might have taken to maximise the performance of Eden Project’s workforce as it grew from 5 to 750 employees’. Limited application and analysis might have noted that as 50% of management had been promoted from within, this would have motivated the workforce. “Motivation” by Terrible Terry Tate. Wednesday, December 04, 2013 PrintEmailTweet This! 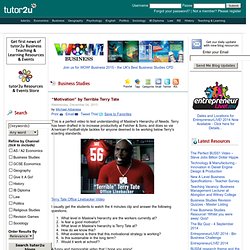 Save to Favorites This is a perfect video to test understanding of Maslow's Hierarchy of Needs. Terry has been drafted in to increase productivity at Felcher & Sons, and does so via American-Football-style tackles for anyone deemed to be working below Terry's exacting standards. Terry Tate Office Linebacker Video I usually get the students to watch the 4 minutes clip and answer the following questions; What level in Maslow's hierarchy are the workers currently at?

A funny and memorable video that I hope you enjoy! Follow the tutor2u team and all our subject blogs on Twitter. Abraham Maslow and the pyramid that beguiled business. Unions call for North Sea tax breaks as oil slump threatens jobs. The role of the North Sea as a goldmine for future tax revenues and highly paid jobs is under threat unless something is done urgently to address a crisis triggered by plunging oil prices, the government was warned. 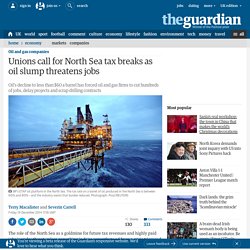 Leading executives, politicians and union leaders said billions of pounds worth of Treasury income and 37,500 jobs were at risk and some want the tax burden to be lowered further in a bid to stimulate new activity and create longerterm fiscal revenues. Sir Ian Wood, a government adviser and former oil engineering boss, said 10% of the North Sea workforce could be in danger while Robin Allan, chairman of the independent explorers’ association Brindex, told the BBC that the industry was “close to collapse”.