3 7 Economics Revision UK Macro up to 2013. 3.7.1 SWOTting Staycations. 3 7 1 Understanding Mission Aims & Objectives. 3.7.1 Bowman's Strategy Clock - Strategy Skills Training. Making Sense of Eight Competitive Positions © iStockphoto/Zeffss1 In many open markets, most goods and services can be purchased from any number of companies, and customers have a tremendous amount of choice. 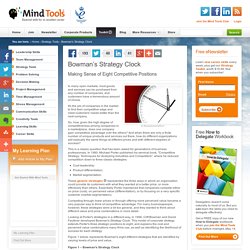 It's the job of companies in the market to find their competitive edge and meet customers' needs better than the next company. So, how, given the high degree of competitiveness among companies in a marketplace, does one company gain competitive advantage over the others? And when there are only a finite number of unique products and services out there, how do different organizations sell basically the same things at different prices and with different degrees of success?

Kaplan and norton's organizational performance management tool In the beginning was darkness. 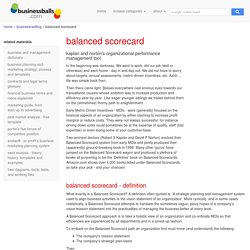 We went to work, did our job (well or otherwise) and went home - day in and day out. We did not have to worry about targets, annual assessments, metric-driven incentives, etc. 3.7.3 - The Triple Bottom Line: What Is It and How Does It Work? Timothy F. 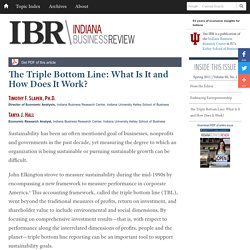 Interest in triple bottom line accounting has been growing across for-profit, nonprofit and government sectors. The Triple Bottom Line Defined Calculating the TBL. 3.7.3 The Triple Bottom Line - Strategy Skills Training. Measuring Your Organization's Wider Impact © iStockphoto Imagine going to work everyday for a company that you are truly excited about, and proud to be a part of. 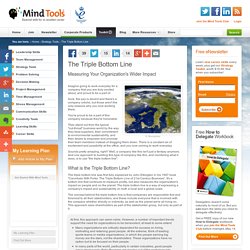 Sure, the pay is decent and there's a company crèche, but those aren't the only reasons why you love working there. You're proud to be a part of this company because they're honorable. They stand out from the typical "cut-throat" business world by the way they treat suppliers, their commitment to environmental sustainability, and their desire to empower and promote their team members instead of dragging them down. Sounds pretty amazing, right? What is the Triple Bottom Line? The triple bottom line was first fully explained by John Elkington in his 1997 book "Cannibals With Forks: The Triple Bottom Line of 21st Century Business". 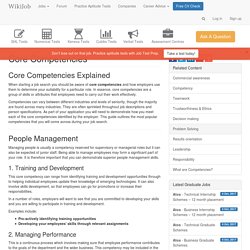 In essence, core competencies are a group of skills or attributes that employees need to carry out their work effectively. Competencies can vary between different industries and levels of seniority, though the majority are found across many industries. 3.7.4 Is free trade good or bad? Image copyright Reuters Free trade is something of a sacred cow in the economics profession. 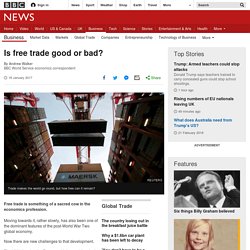 Moving towards it, rather slowly, has also been one of the dominant features of the post-World War Two global economy. 3.7.4 - The political and legal environment Article. 3.7.4 Why are Trump opponents deleting their Uber accounts? Political Changes. Image copyright Twitter/@KeeganNYC Protests over Donald Trump's executive order banning nationals of seven countries from the US have engulfed one of Silicon Valley's biggest companies - even though Uber's chief executive has come out against the ban. 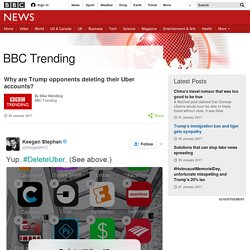 As anti-Trump activists gathered at US airports to voice their opposition to travel restrictions, a union representing New York City taxi drivers decided to weigh in. The New York Taxi Workers Alliance (NYTWA) called for an hour-long halt on pickups from John F Kennedy International Airport, the city's busiest. Image copyright Twitter/@NYTWA Demands for Uber rides from the airport increased and the company's surge pricing - where fares increase automatically according to demand - kicked in, until Uber announced on Twitter that it would suspend the surge. The move was interpreted by some Trump opponents as an attempt to break the hour-long strike, and soon the hashtag #DeleteUber was trending on Twitter. Image copyright Twitter/@bro_pair. 3.7.4 Airbnb to lose £325m in London bookings after holiday rental rules tighten. 1/29 Mayor Sadiq Khan axes new Routemaster bus from the streets of London - Friday January 6 London Mayor Sadiq Khan has ended any hopes to purchase new Routemasters bus for the capital's streets as he tries to balance the books on London's transport budget. 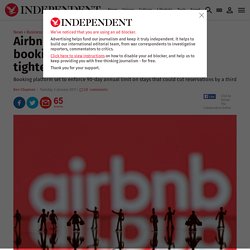 Once called 'Boris buses' named after his the previous mayor, every bus would cost around £350,000 each, or around £50,000 more than an ordinary bus. But the new mayor has promised to freeze purchases of the vehicles, which were criticised for being expensive and sauna-like conditions. Getty Images 2/29 FTSE closes 2015 at record high - Friday December 31 Britain’s blue chip FTSE 100 set a new record on the last day of trading of 2016 after climbing to record closing highs for two consecutive days. The blue-chip index gained 22 points or 0.3 per cent, to finish at 7142 points on Friday, its third closing high in as many days and a new intraday high. 3.7.5 Brexit plunges UK economy to worst level since 2009. Image copyright Getty Images Britain's decision to leave the EU has led to a "dramatic deterioration" in economic activity, not seen since the aftermath of the financial crisis. 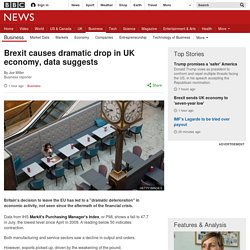 Data from IHS Markit's Purchasing Manager's Index, or PMI, shows a fall to 47.7 in July, the lowest level since April in 2009. 3.7.5. Exchange Rates and Inflation: The Impact of Brexit on Business Costs. This article from the Guardian is packed with A Level Business concepts - how many can you spot? 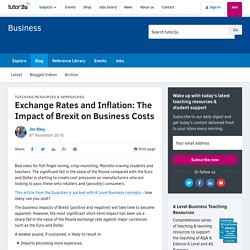 The business impacts of Brexit (positive and negative) will take time to become apparent. However, the most significant short-term impact has been via a sharp fall in the value of the Pound exchange rate against major currencies such as the Euro and Dollar. A weaker pound, if sustained, is likely to result in: Imports becoming more expensive;Exports becoming cheaper in international markets (i.e. more price competitive) So whilst UK manufacturers and other businesses trying to sell overseas should benefit from a lower exchange rate, those relying on imported goods and services (or which use inputs priced in overseas currencies) are starting to suffer from rising costs.

Imagine a UK-based manufacturer who buys a key raw ingredient which is priced in US Dollars (as most commodities are). $10,000 of those raw materials when the exchange rate is £1 = $1.50 costs the manufacturer £6,667. 3.7.5. Fiscal Policy - Study Notes. 3.7.5 (4) What is globalisation? 3.7.5 Saving Globalization and Technology from Themselves. Our societies need the voices and efforts of corporate leaders in order to tackle the inequality and social dislocation caused by technology and globalization.

An incremental extension of corporate social responsibility activities will not be sufficient. The growing divide between winners and losers has become a specter that haunts both business and society—and it is time to confront it. Business leaders need to balance two apparently conflicting objectives. First, they need to secure the sustainability and prosperity of their own companies. This remains a CEO’s prime responsibility, and it has become much harder in an era defined by lower growth, impatient investors, geopolitical uncertainty, and extremely rapid technological change.

To achieve those ends, we propose that business leaders embrace a new agenda comprising seven areas of opportunity. 3.7.6 Shampoo bottle made from ocean plastics hailed as ‘technological breakthrough’ Beaches strewn with plastic waste have become a graphic illustration of just how much plastic we use in everything from food packaging to cosmetics, and how much of it gets thrown away. Consumer goods giant P&G has become the latest company to attempt to show it is tackling the problem, announcing plans for a limited run of Head & Shoulders shampoo in bottles made partly from plastic waste collected by volunteers on France’s beaches.

It follows the likes of Adidas, which put 7,000 pairs of trainers made from marine plastics on sale in November, and Pharrell Williams, whose clothing line for G-Star RAW has featured denim containing plastic from the oceans. Ecover, which sells cleaning products, has produced several limited edition bottles, using marine plastics from the North Sea and waste collected from Amsterdam’s canals. P&G expects to manufacture up to 170,000 of their special edition bottle, produced in collaboration with recycling business TerraCycle and waste management firm Suez. 3.7.6 - Carroll's CSR Pyramid - study notes. 3.7.6 CSR & Ethics: Apple and the EU Battle Over Tax Avoidance. 3.7.6 Under pressure: campaigns that persuaded companies to change the world. Hard-hitting activist campaigns against big corporations have become part of the sustainability landscape.

Some change the world. Some change little. Telling the difference between one and the other isn’t easy. Consider this example of a victory that is less than it seemed at the time: when the Breast Cancer Fund accused Revlon of using chemicals linked to cancer in its cosmetics, the company called the charges “false and defamatory”, demanded a retraction and threatened to sue. Instead, last month, Revlon for the first time published an ingredients policy. So what happened? 3.7.6 Do Socially-Responsible Businesses Perform Better? 3.7.6 - Technological Change in the Automotive Sector: Software Rules - Not Hardware. A fascinating short video here from the FT Business and Automotive team which considers how modern cars have become highly sophisticated pieces of technology - and how further technological change may transform the modern motor.

The increasing complexity and technological sophistication of cars is posing some interesting strategic challenges for car makers who face competition from more than just the automotive manufacturers. The modern car is no longer mechanical; it is electronic. Up to a quarter of the cost of building a vehicle is related to software not hardware. Andy Sharman from the FT points out that today's premium cars already contain: A mile of cables100 million lines of codeUp to 70 computer control unitsThe computing power of around 20 advanced PCs So where next for car manufacturers?

Sharman points out a key threat to the leading existing car makers. 3.7.6 Carroll's Social Responsibility Pyramid. 3.7.6 Structural slump in retail. 3 7 6 Social Environment changes, benefits and consumption examples. 3.7.6 (1) UK is the ‘most internet-based major economy’ The internet contributes to 8.3% of the UK economy, a bigger share than for any of the other G20 major countries, a new study suggests.

The "internet economy" was worth £121bn in 2010, more than £2,000 per person, researchers at the Boston Consulting Group (BCG) said. That made it bigger than the healthcare, construction or education sectors. The UK also carries out far more retail online than any other major economy. Some 13.5% of all purchases were done over the internet in 2010, according to BCG, and this is projected to rise to 23% by 2016. Chocolate v sex The researchers said that the overall UK web economy is particularly fast-growing.

They predict it will continue to expand at a rate of 11% per year for the next four years, reaching a total value of £221bn by 2016. 3.7.6 (1) Demographic trends in the UK and the implications for investment. 3.7.8 - Investment Appraisal - Sensitivity Analysis.