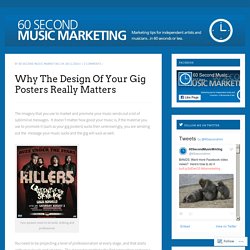 It doesn’t matter how good your music is, If the material you use to promote it (such as your gig posters) sucks then unknowingly, you are sending out the message your music sucks and the gig will suck as well. Your posters need to be bold, striking and professional. You need to be projecting a level of professionalism at every stage, and that starts with your visuals and imagery. The gig poster might be the first interaction someone has with your band and if it is poorly and cheaply designed you’ve started off on the wrong foot. Now that there are free design production tools like Canva there really is no excuse for posters that look like this. How To: Write A Press Release - The Big Music Project.

I remember the first time I was asked to write a press release. 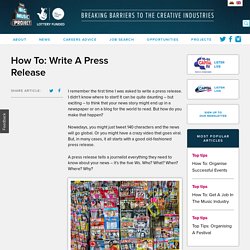 I didn’t know where to start! It can be quite daunting – but exciting – to think that your news story might end up in a newspaper or on a blog for the world to read. But how do you make that happen? Nowadays, you might just tweet 140 characters and the news will go global. How to Write Your Own Music Marketing Plan. How to Write Your Own "FourFront" Music Marketing Plan by Christopher Knab March 2008 Back to The Academy I Have a Question for You...What Are Your Goals? 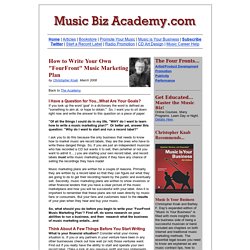 If you look up the word ‘goal’ in a dictionary the word is defined as "something to aim at, or hope to obtain. " So, I want you to sit down right now and write the answer to this question on a piece of paper: “Of all the things I could do in my life, “WHY do I want to learn how to write a music marketing plan? " Do concert posters still matter? - DIY Musician Blog. Tour Press Release Template for Bands and Musicians.

If you want it to be standing room only at the shows on your tour, then you need to publicize your band as much and as often as you can. 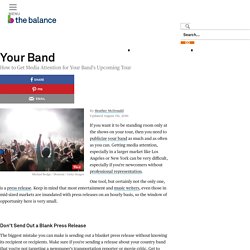 Getting media attention, especially in a larger market like Los Angeles or New York can be very difficult, especially if you're newcomers without professional representation. One tool, but certainly not the only one, is a press release. Keep in mind that most entertainment and music writers, even those in mid-sized markets are inundated with press releases on an hourly basis, so the window of opportunity here is very small. Don't Send Out a Blank Press Release The biggest mistake you can make is sending out a blanket press release without knowing its recipient or recipients. Concert Promotion Ideas - Postano.

Social media is a powerful tool that concert promoters can use to get people in the door and foster excitement about an event. 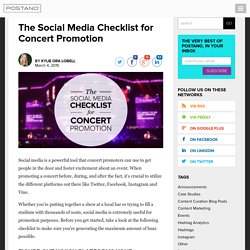 When promoting a concert before, during, and after the fact, it’s crucial to utilize the different platforms out there like Twitter, Facebook, Instagram and Vine. Whether you’re putting together a show at a local bar or trying to fill a stadium with thousands of seats, social media is extremely useful for promotion purposes. Sandbox147342. Event Marketing Strategy: Timeline, Template and Tactics - Eventbrite UK Blog. If you’ve ever run events, you’ll know that no matter how amazing they are in concept, they very rarely just ‘sell themselves’ (annoying, right?). 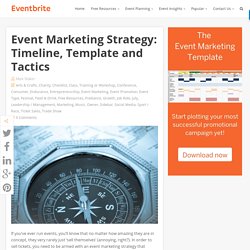 In order to sell tickets, you need to be armed with an event marketing strategy that effectively promotes your event to your target audience. It’s all very well having a vague idea about using social media, email and word of mouth to drive your ticket sales, but the best event marketing strategies follow a timeline and a logical sequence, each promotion reinforcing the last. UNIT 2 Student LOG BOOK.