Plastic in the Ocean 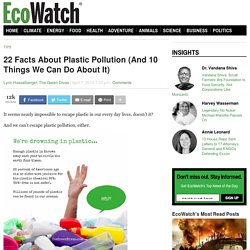 And we can’t escape plastic pollution, either. Plastic is literally at my fingertips all day long. Plastic keyboard. Plastic framed computer monitor. The shocking impacts of plastic pollution in our oceans – EIA International. Gray whale entangled in netting (c) BobTalbot, via Monofilament Recovery & Recycling Program We live in an increasingly throw-away society, but what are the true environmental costs of our perfectly packaged products? 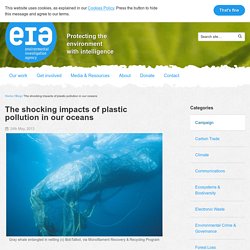 Great Pacific garbage patch. The area of increased plastic particles is located within the North Pacific Gyre, one of the five major oceanic gyres. 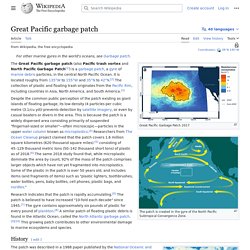 Visualisation showing ocean garbage patches. The Great Pacific garbage patch, also described as the Pacific trash vortex, is a gyre of marine debris particles in the central North Pacific Ocean located roughly between 135°W to 155°W and 35°N and 42°N.[1] The patch extends over an indeterminate area, with estimates ranging very widely depending on the degree of plastic concentration used to define the affected area. The patch is characterized by exceptionally high relative concentrations of pelagic plastics, chemical sludge and other debris that have been trapped by the currents of the North Pacific Gyre.[2] Because of its large area, it is of very low density (4 particles per cubic meter), and therefore not visible from satellite photography, nor even necessarily to casual boaters or divers in the area.

Discovery[edit] Charles J. Formation[edit] Estimates of size[edit] Causes, Effects and Solutions of Plastic Pollution. As the world’s population continues to grow, so does the amount of garbage that people produce. 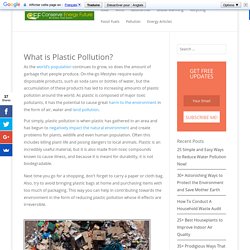 On-the-go lifestyles require easily disposable products, such as soda cans or bottles of water, but the accumulation of these products has led to increasing amounts of plastic pollution around the world. As plastic is composed of major toxic pollutants, it has the potential to cause great harm to the environment in the form of air, water and land pollution. Put simply, plastic pollution is when plastic has gathered in an area and has begun to negatively impact the natural environment and create problems for plants, wildlife and even human population.

Often this includes killing plant life and posing dangers to local animals. Plastic is an incredibly useful material, but it is also made from toxic compounds known to cause illness, and because it is meant for durability, it is not biodegradable. Next time you go for a shopping, don’t forget to carry a paper or cloth bag. Plain Old Trash Rinkesh. Plastic Pollution. Pollution Prevention - Save Our Shores. The goal of the Plastic Pollution Initiative is to reduce the amount of trash and debris, particularly plastic pollution, reaching the Monterey Bay National Marine Sanctuary and the ocean. 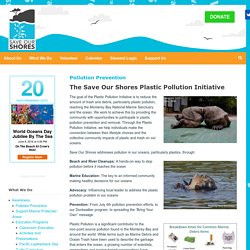 We work to achieve this by providing the community with opportunities to participate in plastic pollution prevention and removal. 20 Facts About Ocean Pollution. The ocean remains one of the most expansive, mysterious and diverse places on Earth. 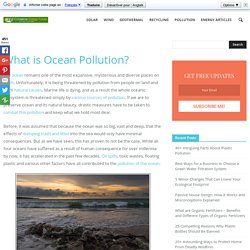 Unfortunately, it is being threatened by pollution from people on land and from natural causes. Marine life is dying, and as a result the whole oceanic ecosystem is threatened simply by various sources of pollution. If we are to preserve ocean and its natural beauty, drastic measures have to be taken to combat this pollution and keep what we hold most dear. 10 Ways to Reduce Plastic Pollution. While soaking up the relaxing cadence of crashing waves on the beach, no one wants to think about how the ocean has basically become garbage soup. 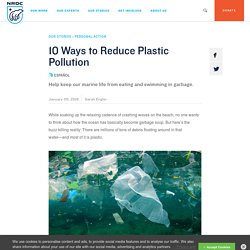 But here’s the buzz-killing reality: There are millions of tons of debris floating around in that water—and most of it is plastic. This constant barrage (the equivalent of 136 billion milk jugs each year, estimates a study published in the journal Science) poses a serious danger to marine life. Animals can get tangled up in this trash or ingest it—either because they mistake it as prey or because the plastic has been broken down into tiny particles by seawater. Plastic, of course, is uniquely problematic because it’s nonbiodegradable and therefore sticks around for a lot longer (like up to 1,000 years longer) than other forms of trash. And we're not just talking about people dumping their garbage overboard. 1. 2. Each year, close to 20 billion plastic bottles are tossed in the trash. 3. 4. 5. 6. 7. 8.

Where Is The Biggest Garbage Dump On Earth? 10 Ways to Reduce Plastic Pollution. Life with plastic, not fantastic, World News. Walk along a beach pretty much anywhere in the world and you'll find seashells, seaweed - and plastic. 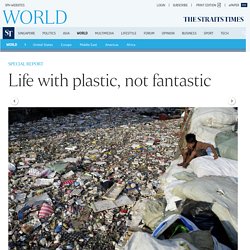 From bottles and bags, to flip-flops, polystyrene boxes and old fishing nets, the world is dumping millions of tonnes of plastic into the world's oceans, and the amount is growing every year. Plastic waste clogs reefs and beaches and kills marine life that gets entangled or eats plastic, thinking it is food. 19-YEAR-OLD INVENTS FEASIBLE SOLUTION TO CLEANUP OCEAN GARBAGE PATCHES: The Ocean Cleanup, developing technologies to extract, prevent and intercept plastic pollution. June 3, 2014, New York - The Ocean Cleanup, founded by Dutchman Boyan Slat, has unveiled its feasibility report today, concluding that its concept is a viable method to clean the oceans from plastic. 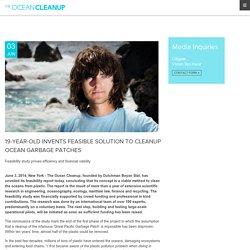 The report is the result of more than a year of extensive scientific research in engineering, oceanography, ecology, maritime law, finance and recycling. The feasibility study was financially supported by crowd funding and professional in kind contributions. The research was done by an international team of over 100 experts, predominantly on a voluntary basis. The next step, building and testing large-scale operational pilots, will be initiated as soon as sufficient funding has been raised. Oceans Will Have More Plastic Than Fish By 2050.

Eco friendly beach pods made from plastic dumped in ocean to open in Singapore. BEACH PODS: These quirky beach huts are made from recycled rubbish If you want rubbish accommodation for the night you're in luck. 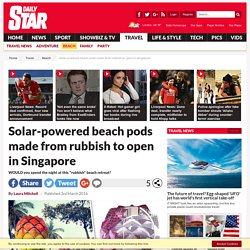 These amazing multicoloured beach pods are made entirely from washed up plastic. Design company Spark have finally found a positive was of transforming litter that is clogging up the beaches and harming wildlife – and we want one. Beach-goers can spend the night in these quirky pods, that are run on solar power and can be accessed via a trap door and steel ladders. DREAMY: Beach-lovers can spend the night listening to the lapping waves. Adidas unveils shoes made from ocean plastic trash. Plastic trash from the ocean and illegal fishing nets, two culprits behind the loss of marine animals in the ocean, are given a second chance to redeem their value on land by becoming adidas shoes. The global sportswear maker unveiled last month its latest innovation in collaboration with non-profit group Parley for the Oceans, which partners with organisations and companies on projects that address the destruction of oceans from pollution and overfishing.

The concept shoes was launched on the sidelines of Parley Talks, a climate campaign event titled ‘Oceans. Climate. Life.’ and hosted on June 29 by the United Nations at its headquarters in New York. These psychedelic beach huts are made from plastic waste plucked from the ocean. Over the past few years, a small handful of one-off projects have garnered accolades for incorporating plastic sea trash into statement-making sportswear like designer denim and super-sweet sneakers. And let’s not forget snazzy hand soap bottles and vacuum cleaners, too … Now, SPARK, an award-winning international architecture and urban design studio that we previously found fusing senior living with urban farming, is looking to harness the potential of recycled plastic ocean waste and apply it to a large-ish-scale architecture project.

Both eye-catching and statement-making, SPARK’s Beach Huts concept is the prettiest — and certainly most kaleidoscopic work — of (speculative) recycled plastic design wizardry that I’ve come across. Envisioning Singapore’s East Coast Park as a potential locale, Beach Huts are a series of elevated oceanfront camping structures that, as you can see, look like supersized Day-Glo pinecones. Or maybe pineapples dressed up for an EDM party. Illustration: SPARK. Life with plastic, not fantastic, World News. Spark's plans for colourful beach huts clad with recycled plastic. Architecture firm Spark wants to use plastic to build a series of elevated beach huts resembling giant pine cones in Singapore. Spark's Singapore office envisions using some of the millions of tons of plastic waste dumped into the world's oceans every year to build a series of unusual architectural structures along the shoreline of the city's East Coast Park.

The aim is to offer sheltered camping spaces for park visitors, but also to help raise awareness about the effects of ocean plastic, which is estimated to be killing over a million seabirds and 100,000 marine mammals every year. A large percentage of the waste is high-density polyethylene (HDPE), a non-biodegradable plastic used for manufacturing items like plastic bottle and yoghurt pots. Spark proposes collecting this material, sorting it into colours, then shredding it. The granules would then be poured into shingle-shaped moulds and reheated, creating a new type of tile for cladding a building's exterior.

Plastics in Our Oceans. All photos (except where noted) courtesy of Paul Joyce, Sea Education Association by Kimberly Amaral Strolling through the average supermarket, shoppers find literally hundreds (if not thousands) of items to make their lives easier.