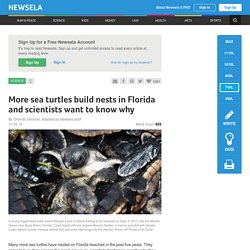 They come to bury their eggs in the sand. However, scientists don't know exactly why they are coming back. 2014 was Earth's warmest year yet. U.S. climate scientists said Friday that 2014 was the warmest year they have ever seen. 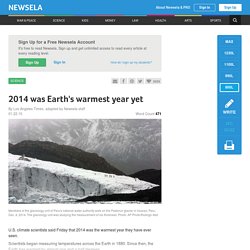 Scientists began measuring temperatures across the Earth in 1880. Since then, the Earth has warmed by almost one and a half degrees. This might seem small, but scientists say that higher temperatures could cause problems. Floods, serious storms and droughts could become more common. The scientists also warned that humans are causing the planet to warm faster.

Getting Warmer Since 2002 Climate scientists use information collected around the world to study patterns in weather over time. Sea turtles find their spot on the beach. LOS ANGELES — Every few years, female sea turtles return to the beach where they were born. 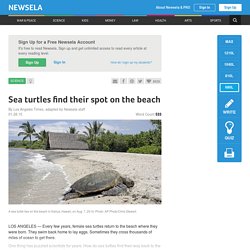 They swim back home to lay eggs. Sometimes they cross thousands of miles of ocean to get there. One thing has puzzled scientists for years: How do sea turtles find their way back to the place where they were hatched? Scientists knew part of how they did it. They knew that returning sea turtles are guided by a mysterious force. A Very Strong Pull Geomagnetism is an invisible but very strong force. California looks at a water puzzle. LOS ANGELES — On Thursday, workers measured the amount of snow in the meadows of the Sierra Nevada mountains. 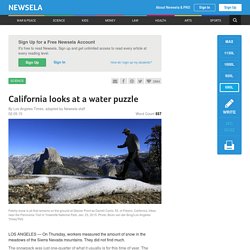 They did not find much. The snowpack was just one-quarter of what it usually is for this time of year. The snowpack is layers of snow built up over time. A dry January was partly to blame for the shrinking snowpack. Also, heavy storms in December dumped rain on the state, not snow. And that is the problem, scientists say. In the future, it could mean that California may get too much rain and too little snow during the winter. Slow Snow, Fast Rain Scientists think that by the year 2100, more than half of the snowpack could disappear. Still, California is expected to get as much water as ever. Melted snow gives California much of the water it uses. Normally, the snow melts slowly over several months.

Rain, on the other hand, comes down all at once. California has suffered three years of severe drought. Seeking Solutions California may also use weather forecasts to plan. Countries join to protect high seas. The ocean life in the high seas of the world is dying. 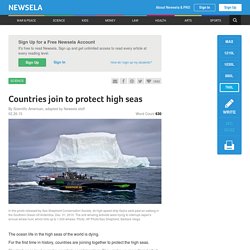 For the first time in history, countries are joining together to protect the high seas. The high seas lay beyond a country's coastal waters. They make up more than half of our planet’s oceans. Tough times for polar bears. A polar bear named Koda comes out of his hole at the Pittsburgh Zoo. 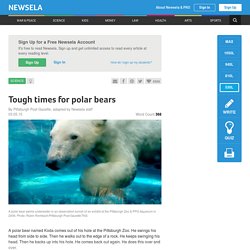 He swings his head from side to side. Then he walks out to the edge of a rock. He keeps swinging his head. Then he backs up into his hole. Coral reefs prepare for warmer waters. The Persian Gulf's coral reefs are not the biggest. 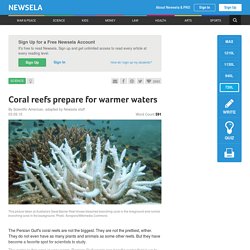 They are not the prettiest, either. They do not even have as many plants and animals as some other reefs. But they have become a favorite spot for scientists to study. The water in this area is very warm. Persian Gulf corals can handle water that is up to 36 degrees Celsius (97 degrees Fahrenheit). It might only sound like a few degrees difference, but it's a big deal for the corals. Coral And Algae Work Together. Scientists are trying to learn more about changes in the ocean. FORT LAUDERDALE, Fla. — Science teacher Stephen Kajiura and three of his students were on a boat out in the ocean. 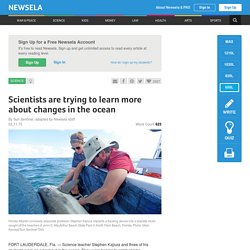 They were hoping to catch sharks. Thousands of blacktip sharks come to South Florida every winter. The animals travel from up north looking for warmer waters. Kajiura has been catching some of these sharks. He is putting transmitters inside their bodies. Once Kajiura has put a transmitter in a shark, he sets the animal free. The sharks come from as far away as North Carolina each year. Bites Rarely Harm Humans Badly Blacktip sharks typically grow to be 5 or 6 feet long. Last year, two people in South Florida were bitten by blacktip sharks: a man and a 9-year-old boy.

Kajiura said it is important to understand just where the sharks are going. Sharks Help Keep Ocean Life In Balance Sharks are good for South Florida’s ocean waters, Kaijura said. Even mummies have to deal with climate change. About 7,000 years ago, a group of people called the Chinchorro lived along the coasts of northern Chile and southern Peru. 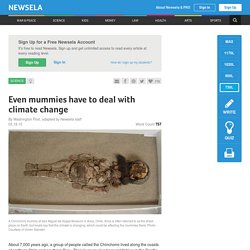 Their lives revolved around fishing in the Pacific Ocean. Yet, just behind them was a desert — the Atacama. It has been called the driest place in the world. The Chinchorro were unique in many ways, but perhaps most of all in how they were buried.