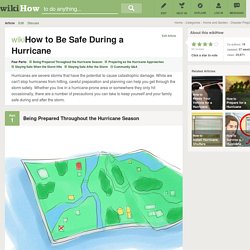 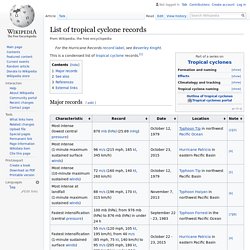 Hurricane Saffir-Simpson Category scale. Tropical storm scale. How hurricanes form. Hurricanes/Tropical Cyclones. Where do hurricanes occur? Hurricanes form best over large swaths of warm water, which is why they typically form along the equator. 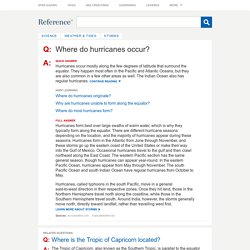 There are different hurricane seasons depending on the location, and the majority of hurricanes appear during these seasons. Hurricanes form in the Atlantic from June through November, and these storms go up the eastern coast of the United States or make their way into the Gulf of Mexico. Occasional hurricanes travel to the gulf and then crawl northeast along the East Coast. The western Pacific section has the same general season, though hurricanes can appear year-round. In the eastern Pacific Ocean, hurricanes appear from May through November. How Hurricanes form. Hurricane Fran. 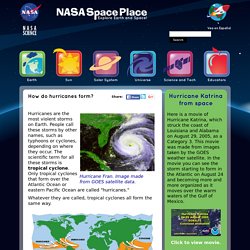 Image made from GOES satellite data. Hurricanes are the most violent storms on Earth. People call these storms by other names, such as typhoons or cyclones, depending on where they occur. Weather Wiz Kids weather information for kids. Who are the "Hurricane Hunters"? 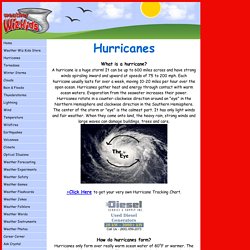 The brave "hurricane hunters" work for the National Oceanic and Atmospheric Administration (NOAA). Each mission lasts about ten hours, with the crews passing four to six times through the storm. The planes carry radar, sophisticated computers, and weather instruments that determine characteristics such as temperature, air pressure, wind speed, and wind direction inside the hurricane. The crews also release instruments that measure temperature, air pressure, and wind at different levels as the devices drop through the hurricane toward the ocean.

Hurricane Alley - Wikipedia. This article is about the area of frequent tropical cyclone activity in the Atlantic Ocean. 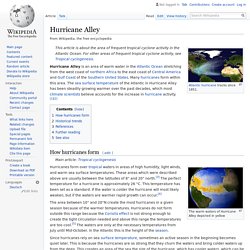 For other areas of frequent tropical cyclone activity, see Tropical cyclogenesis. Hurricane Alley is an area of warm water in the Atlantic Ocean stretching from the west coast of northern Africa to the east coast of Central America and Gulf Coast of the Southern United States. Many hurricanes form within this area. The sea surface temperature of the Atlantic in Hurricane Alley has been steadily growing warmer over the past decades, which most climate scientists believe accounts for the increase in hurricane activity.[1][2] Hurricanes. Hurricanes 101 (Video) Pebblegonext.