Food selection by the white-footed mouse (Peromyscus leucopus) on the basis of energy and protein contents. Nutrition Facts and Analysis for Game meat, squirrel, cooked, roasted. For best results, be sure to enable the option to PRINT BACKGROUND IMAGES in the following browsers: - Firefox (File > Page Setup > Format & Options) - Internet Explorer 6/7 (Tools > Internet Options > Advanced > Printing) - In Internet Explorer 7 you will need to adjust the default "Shrink To Fit" setting. 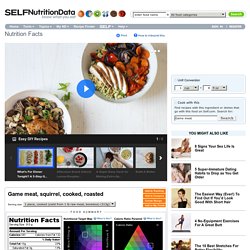 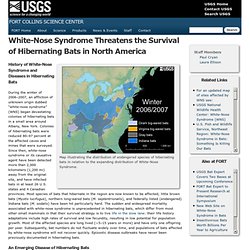 Colonies of hibernating bats were reduced 80–97 percent at the affected caves and mines that were surveyed. Since then, white-nose syndrome or its causative agent have been detected more than 2,000 kilometers (1,200 mi) away from the original site, and have infected bats in at least 26 U.S. states and 4 Canadian provinces. Most species of bats that hibernate in the region are now known to be affected; little brown bats (Myotis lucifugus), northern long-eared bats (M. septentrionalis), and federally listed (endangered) Indiana bats (M. sodalis) have been hit particularly hard. An Emerging Disease of Hibernating Bats What Makes Bats Susceptible to White-Nose Syndrome? Map data compiled by Cal Butchkoski, Pennsylvania Game Commission. 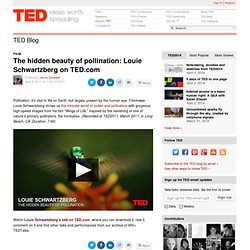 Three years ago, his talk, “Nature. Beauty. Gratitude,” demonstrated his uncanny ability to capture the captivating beauty of our natural world — the tiniest shake of a flower petal, the stirring complexity of a bee’s wing. Signals: The speakers in session 9 of TED2014 Communication is fundamental to how we relate and interact. Termite Symbiosis. Organisms both cooperate and compete in ecosystems. 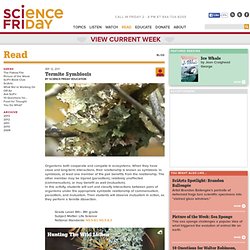 When they have close and long-term interactions, their relationship is known as symbiosis. In symbiosis, at least one member of the pair benefits from the relationship. The other member may be injured (parasitism), relatively unaffected (commensalism), or may benefit as well (mutualism). In this activity, students will sort and classify interactions between pairs of organisms under the appropriate symbiotic relationship of commensalism, parasitism, and mutualism. Then students will observe mutualism in action, as they perform a termite dissection. Grade Level: 6th– 8th grade Subject Matter: Life Science National Standards: NS.5-8.1, NS.5-8.3 Lichens grow practically everywhere, but scientists have neglected them for years, says James Lendemer, a lichenologist with the New York Botanical Garden. Vocabulary Symbiosis: the close association between two or more organisms of different species.

What To Do 1. Hubbard Brook Research Foundation. The Macrolichens of New England (Memoirs of The New York Botanical Garden, Volume 96) (9780893274771): James W. Hinds, Patricia L. Hinds. Naturally Inspired: Genius of Place: Lichen in a New England Forest. A Study of Lichens and Lichenometry. A Study of Lichens and Lichenometry Lichens are an interesting life form comprised of part algae and part fungus. 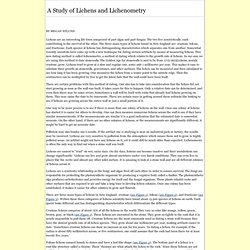 The two live symbiotically, each contributing to the survival of the other. The three main types of lichens found in New England are: crustose, foliose, and fructicose. Each species of lichens has distinguishing characteristics which separates one from another. Somewhat recently scientists have come up with a new technique for dating certain artifacts by means of measuring lichens. There are certain problems with this method of dating. One way to be more precise is to see if there is more than one colony of lichens on the wall. Pollution may also hinder one's results. Lichens are easiest to "read" on wet, rainy days.

Lichens are a symbiotic relationship as the fungi and algae feed off each other in order to ensure survival. Temperature Rising - Series. Heat-Trapping Gas Passes Milestone, Raising Fears By JUSTIN GILLIS The amount of the gas in the air has not been this high for at least three million years, and scientists believe the rise portends large changes in the climate and sea level. 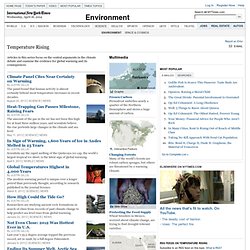 May 11, 2013scienceNews Global Temperatures Highest in 4,000 Years The modern warming period is unique over a longer period than previously thought, according to research published in the journal Science. March 8, 2013scienceNews How High Could the Tide Go? Researchers are studying ancient rock formations in search of clues from records of past climate change to help predict sea level rises from global warming. January 22, 2013scienceNews. Bacteria, Insects Join Forces Against Pesticide.