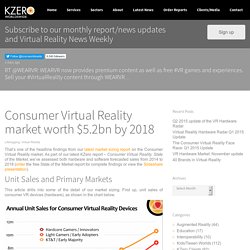 As part of our latest KZero report – Consumer Virtual Reality, State of the Market, we’ve assessed both hardware and software forecasted sales from 2014 to 2018 (order the free State of the Market report for complete findings or view the Slideshare presentation). Unit Sales and Primary Markets This article drills into some of the detail of our market sizing. First up, unit sales of consumer VR devices (hardware), as shown in the chart below. We’ve split the primary audience for consumer VR into three main groups (Hardcore gamers/Innovators), Light Gamers/Early Adopters and the Kids,Tween and Teen (KT&T) segment. On an overall basis, we estimate 2014 unit sales of 200k (all from the Hardcore Gamer / Innovator segment), as the market begins to emerge. 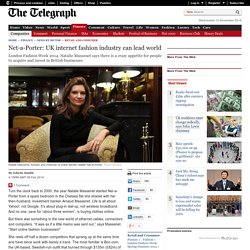 “Actually, it’s the desire for new product. Customers want new things and the way that they get them isn’t written in stone. “All the early movers were either outsiders of the fashion industry or really, really senior people within it who had old-fashioned habits. They weren’t able to disrupt themselves.” IMRG is the UK's industry association for online retail.

IMRG recognise the importance of providing a website that is accessible to all user groups, including the disabled. 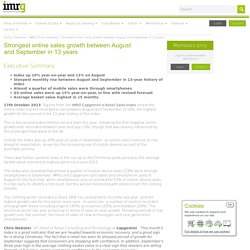 Our pages are validated to current HTML standards and conform to Priority 1 and as many Priority 2 recommendations as possible of the W3C accessibility guidelines. Where possible we have followed guidelines published by accessibility experts and organisations. Introduction www.imrg.org (the Site) is operated by IMRG Limited (we and us). We are a company registered in England. Use of the Site is on the terms incorporated below (Terms of Use) which form a legal agreement between you and us and which can only be amended with our consent. We reserve the right to change these Terms of Use from time to time without prior notice by changing them on the Site. Retail Sales, September 2014. UK shoppers spent £91bn online in 2013 – and look set to spend £107bn in 2014.

UK shoppers spent £91bn online in 2013, according to new figures. 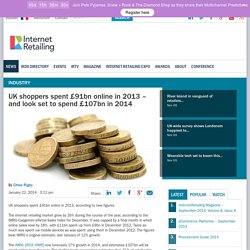 The internet retailing market grew by 16% during the course of the year, according to the IMRG-Capgemini eRetail Sales Index for December. It was capped by a final month in which online sales rose by 18%, with £11bn spent up from £9bn in December 2012. Twice as much was spent via mobile devices as was spent using them in December 2012. The figures beat IMRG’s original estimate, last January of 12% growth. The IMRG [IRDX VIMR] now forecasts 17% growth in 2014, and estimates £107bn will be spent online over the year. IMRG chief information officer Tina Spooner said:”With online shopping having become part of our everyday lives, the growth levels we are seeing in the e-retail market won’t be slowing down any time soon. M&S posts strong online sales as tablet and mobile use rockets. M&S has announced a major jump in trading on its website, including from smartphones and tablets, as it continues to push ahead with a major online platform overhaul. 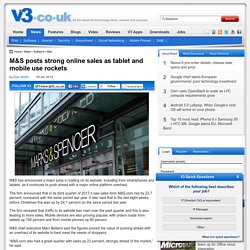 The firm announced that in its third quarter of 2013 it saw sales form M&S.com rise by 22.7 percent, compared with the same period last year. It also said that in the last eight weeks before Christmas this was up by 24.1 percent on the same period last year. The firm revealed that traffic to its website has risen over the past quarter and this is also leading to more sales.

Mobile devices are also proving popular, with orders made from tablets up 100 percent and from mobile phones up 80 percent. Asos latest retailer to see online sales soar. Online clothing retailer Asos is the latest business to reveal strong online sales for the last few months of 2013, as web buying continues to surge. 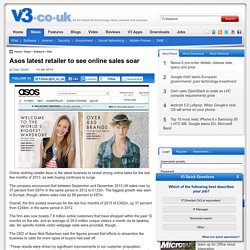 The company announced that between September and December 2013 UK sales rose by 37 percent from £97m in the same period in 2012 to £133m. The biggest growth was seen in Europe, though, where sales rose by 69 percent to £87m. Overall, the firm posted revenues for the last four months of 2013 of £342m, up 37 percent from £249m, in the same period in 2012. The firm also now boasts 7.9 million active customers that have shopped within the past 12 months on the site, and an average of 29.5 million unique visitors a month via its desktop site. No specific mobile visitor webpage visits were provided, though. Online retail worth £91bn in 2013, one fifth of all market.