Elephant's Toothpaste - Kid Version - The Lab. Watch the video. 1.Have students put on their safety glasses and lab smock. 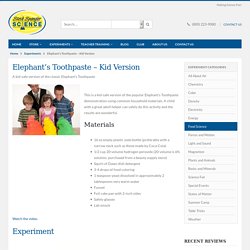 Each student should have in front of them a cake pan, plastic bottle, Dawn in small cup, food coloring, 1/2 cup peroxide, and the dissolved yeast mixture. 2. Stand the bottle up in the center of the cake pan. Put the funnel in the opening.

Simple Mechanics. Cams The basic principle of the cam is to turn a circular motion into a linear one. 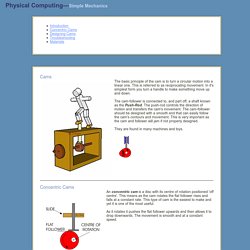 This is referred to as reciprocating movement. In it's simplest form you turn a handle to make something move up and down. The cam-follower is connected to, and part off, a shaft known as the Push-Rod. BBC Earth - Timeline - The Earth formed from a vast gas and dust cloud. From the Big Bang to Me. Space for Kids - Story of the Universe. The Birth of the Earth & Beginning of Life on Earth. How Was The Earth Created? Hello Earth - Origins of Our Planet Where did the Earth come from? 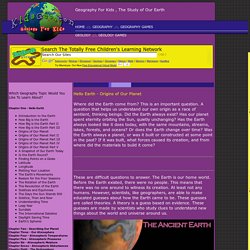 This is an important question. A question that helps us understand our own origin as a race of sentient, thinking beings. Did the Earth always exist? Has our planet spent eternity orbiting the Sun, quietly unchanging? These are difficult questions to answer. TED-Ed and Periodic Videos. Can Project-Based Learning Close Gaps in Science Education? Putting kids to work on meaningful projects can transform classrooms into beehives of inquiry and discovery, but relatively few rigorous studies have examined how well this teaching method actually works. 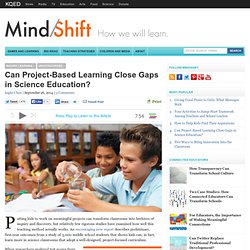 An encouraging new report describes preliminary, first-year outcomes from a study of 3,000 middle school students that shows kids can, in fact, learn more in science classrooms that adopt a well-designed, project-focused curriculum. When researchers analyzed test scores from those classrooms by students’ gender and ethnicity, there were no differences in learning performance. That’s a preliminary indication that high-quality project-based curricula might be able to help narrow the science education achievement gap in children from low-income backgrounds or other groups that are underrepresented in STEM fields. 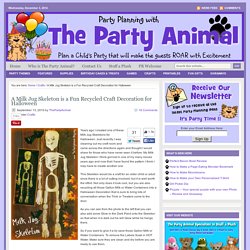 Just recently I was cleaning out my craft room and came across the directions again and thought I would share for those who have never seen it before. My Milk Jug Skeleton I think got lost in one of my many moves years ago and now that I have found the pattern I think I may have to create another one. This Skeleton would be a craft for an older child or adult since there is a lot of cutting involved, but it is well worth the effort. Not only does it look cool, but you are also recycling all those Gallon Milk or Water Containers into a Halloween Decoration that is sure to bring lots of conversation when the Trick or Treaters come to the door.

Learn about Position, Velocity, and Acceleration. Plant structure bi. Seed Plant Overview: The plant body consists of two basic parts--- the shoot system and the root system Shoot system is above ground and includes organs such as leaves, buds, stems, flowers, and fruits The functions of the shoot system include photosynthesis, reproduction, storage, transport, and hormone production The root system is below ground and includes roots as well as modified stem structures such as tubers and rhizomes The functions of the root system include anchorage, absorption, storage, transport, and production of certain hormones Seed plants contain 2 types of vascular tissue (xylem & phloem) to help transport water, minerals, & food throughout the root & shoot systems Plant cells have several specialized structures including a central vacuole for storage, plastids for storage of pigments, and a thick cell wall of cellulose Plant cells are all box-shaped in appearance Meristems: Root Tip with Meristems Specialized Plant Cells: Parenchyma Cells Collenchyma cells Dermal Tissue: 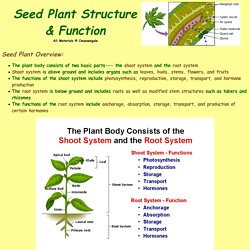 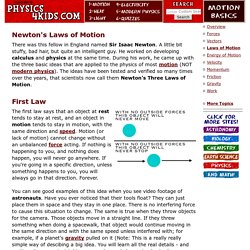 A little bit stuffy, bad hair, but quite an intelligent guy. He worked on developing calculus and physics at the same time. During his work, he came up with the three basic ideas that are applied to the physics of most motion (NOT modern physics). The ideas have been tested and verified so many times over the years, that scientists now call them Newton's Three Laws of Motion. The first law says that an object at rest tends to stay at rest, and an object in motion tends to stay in motion, with the same direction and speed. You can see good examples of this idea when you see video footage of astronauts.