Q&A With Makey Makey Rockstar Educators Ep I. Hummingbird Duo: A Robotics Kit for Ages 10 to 110 - BackerKit. Makeymakey. Playable Gameboy Costume. November 4, 2014 AT 5:00 pm Instructables user fasaxc only had about 24 hours to make a costume for a party and constructed a playable and wearable giant Gameboy. 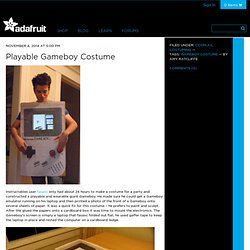 He made sure he could get a Gameboy emulator running on his laptop and then printed a photo of the front of a Gameboy onto several sheets of paper. It was a quick fix for this costume – he prefers to paint and sculpt. After the glued the papers onto a cardboard box it was time to mount the electronics. The Gameboy’s screen is simply a laptop that fasaxc folded out flat; he used gaffer tape to keep the laptop in place and rested the computer on a cardboard ledge. Here’s how he made the buttons work with Arduino: At this point, I had the laptop mounted, Tetris loaded and it’d run through its demo loop every minute or two. See the costume in action: Read more about the build at Instructables. No comments yet. Adafruit has a "be excellent to each other" comment policy. Zine-Multi-Page-Circuit. Digitally Interfaced Book: Paper, Graphite, Makey Makey, Scratch, and Imagination.

As a professional artist, deepening the ways in which seemingly disparate objects and processes are interconnected through locating, and mapping their intersections has been one of the main elements of my studio practice. 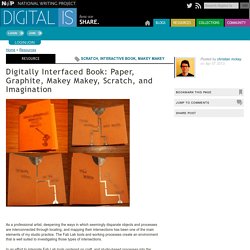 The Fab Lab tools and working processes create an environment that is well suited to investigating those types of intersections. In an effort to integrate Fab Lab tools centered on craft, and studio-based processes into the classroom, I have been working to implement a Mobile MakerCart at a project-based K-8 charter school. In addition to introducing craft-based physical computing projects to the children, a guiding principle behind the MakerCart is to give teachers the opportunity to develop familiarity with the MakerCart’s tools and processes in order to be able to envision the ways in which they might be able to develop their own curriculum for use in the classroom. 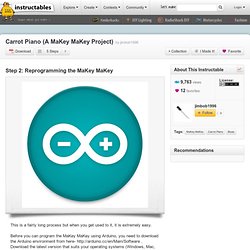 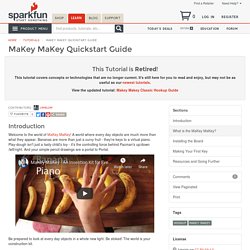 A world where every day objects are much more than what they appear. Bananas are more than just a curvy fruit - they’re keys to a virtual piano. Play-dough isn’t just a tasty child’s toy - it’s the controlling force behind Pacman’s up/down/left/right. MaKey MaKey Quickstart Guide (Part 2) Introduction. 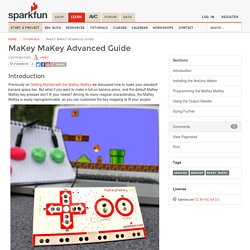 MaKey MaKey Advanced Guide. Makey Makey Will Make You Love The "Internet Of Things" Ever wanted to wake up in a Disney cartoon where everything around you is animated and interactive? 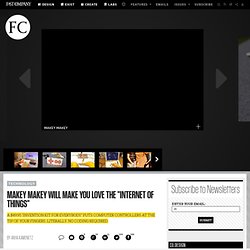 Now you can...Turn a bunch of bananas into a piano. Turn your friends into a synthesizer. Turn a trampoline into a slideshow controller. Turn your hand into a game glove. Makey Makey is a little circuit board that comes with a set of alligator clips. The not-so-secret agenda for Makey Makey, according to creators Jay Silver and Eric Rosenbaum, is to allow anyone to become an engineer. Makey Makey is part of a creative and technological down-shift in which very smart electronics are dumbed down to make the world manipulable by ordinary people in ways previously available only to developers.

In the 14 months since the Kickstarter-funded project made its debut, 50,000 Makey Makeys have gone into the world; roughly one in five are being used in Makerspaces, for after-school programs and other educational settings. 1. MaKeyMaKey. Massive Veg Attack: Makey Makey + Fruits, Vegetables = Music. Call it a massive attack of fruits and veg. 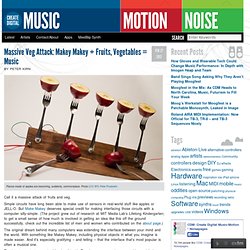 Simple circuits have long been able to make use of sensors in real-world stuff like apples or JELL-O. But Make Makey deserves special credit for making interfacing those circuits with a computer silly-simple. (The project grew out of research at MIT Media Lab’s Lifelong Kindergarten; to get a small sense of how much is involved in getting an idea like this off the ground successfully, check out the incredible list of men and women who contributed on the about page.) The original dream behind many computers was extending the interface between your mind and the world.

With something like Makey Makey, including physical objects in what you imagine is made easier. The latest, greatest example: Massive Attack’s Teardrop, as covered on vegetables and fruits using the system, playing some very impressively-tight percussion and melody lines. This one is just great (though now I also want to make a bass drum sample with an eggplant; sounds nice): Soundplant by Marcel Blum home page.